Erling Haaland scored two goals and made another as Borussia Dortmund repeatedly came from behind before beating Bayer Leverkusen 4-3 and Bayern Munich thumped RB Leipzig 4-1 in a pair of highly-entertaining Bundesliga games on Saturday.

Florian Wirtz opened the scoring for Leverkusen against Dortmund, toe-poking a goal in the ninth minute. However, striker Haaland equalised with a towering header in the 37th before Jude Bellingham had a second for Dortmund ruled out due to a foul in the build-up.

Patrik Schick scored in first-half stoppage time to put Leverkusen 2-1 up and there was to be no let-up after the break.

Julian Brandt levelled again in the 49th minute, deftly controlling Haaland’s pass with his heel before rifling the ball into the roof of the net, but within six minutes Leverkusen were ahead again through Moussa Diaby’s strike from the edge of the area.

Again Dortmund equalised, this time through a superb Raphael Guerreiro free-kick, and they went into a 4-3 lead from the penalty spot in the 77th minute when Haaland fired home after Marco Reus was struck in the face by the arm of Odilon Kossounou.

In the late game, teenage attacking midfielder Jamal Musiala came off the bench to score one goal and make another as Bayern Munich outclassed RB Leipzig, with Robert Lewandowski, Leroy Sane and Maxim Choupo-Moting also getting on the scoresheet. 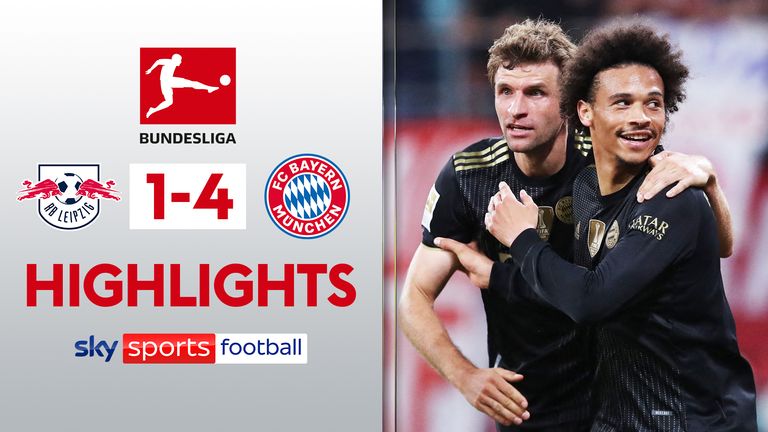 Highlights of the Bundesliga clash between RB Leipzig and Bayern Munich

Earlier in the day, VfL Wolfsburg made it four wins out of four with a comfortable 2-0 victory over struggling Greuther Furth, while FC Cologne managed to hang on for a 1-1 draw at Freiburg despite losing Florian Kainz to a second yellow card in the 74th minute.

Mainz scored a goal in each half as they beat Hoffenheim 2-0 while Union Berlin were held to a scoreless draw at home to Augsburg.

Wolfsburg have a maximum 12 points after four games, with Bayern Munich second on 10 points and Dortmund third, a point further back.

Hertha Berlin will go in search of their first points of the season when they travel to Bochum on Sunday, while fellow strugglers Eintracht Frankfurt and Borussia Moenchengladbach host VfB Stuttgart and Arminia Bielefeld respectively.

Serie A: Juventus beaten at Napoli

Napoli piled more misery on Juventus on Saturday as Kalidou Koulibaly’s late winner clinched a 2-1 comeback victory to continue the hosts’ perfect start to the Serie A season and leave the Turin club winless after three games.

Massimiliano Allegri’s side were without several key players due to injuries and late returns from the international break, but they took an early lead at the Stadio Diego Armando Maradona when Alvaro Morata curled a fine finish beyond David Ospina.

Napoli dominated possession but struggled to turn opportunities into goals, until Wojciech Szczesny weakly palmed a Lorenzo Insigne effort into the path of Matteo Politano for an easy 57th minute tap-in.

The hosts kept pushing for a decisive second and were rewarded in bizarre circumstances with five minutes remaining, when Juve substitute Moise Kean’s headed backpass from a corner required a reflex save from Szczesny but left Koulibaly with a tap-in.

The result leaves Napoli top of the standings with nine points ahead of the remaining seven weekend fixtures, while Juve dropped to 16th, with one point on the board from the first three rounds.

It was a tale of three penalties at Atalanta, who were defeated for the first time this season as Dusan Vlahovic’s double from the spot saw Fiorentina beat them 2-1.

Duvan Zapata pulled one back for the hosts from 12 yards after half-time, but the visitors held on to rack up their second straight win.

Venezia held off a late comeback attempt from Empoli to win 2-1 at the Stadio Carlo Castellani and pick up their first points of the season at the third attempt.

Paris Saint-Germain kept their perfect Ligue 1 record intact as they hammered promoted Clermont 4-0 with a brutal display on Saturday.

In the absence of Lionel Messi and Neymar, who were not in the squad after returning late from international duty with Argentina and Brazil respectively, Kylian Mbappe netted his fourth goal on his first appearance at the Parc des Princes since his failed transfer to Real Madrid.

The France striker, who has just recovered from a calf injury, was a constant threat as he added to Ander Herrera’s first-half brace with Idrissa Gueye rounding it off after the hour.

PSG, who travel to Club Brugge for their Champions League Group A opener on Wednesday, lead the standings on 15 points with Clermont fourth on eight points after their first defeat in their debut season among the elite.

Marseille moved third in the table thanks to a 2-0 win at Monaco, with Bamba Dieng netting his first goals for the club.

The 21-year-old hit both posts before finally beating the offside trap to slot the visitors in front shortly before half-time, and doubled his tally with a powerful second on the hour mark to keep up Marseille’s unbeaten start to the season.

Athletic Bilbao moved top of La Liga ahead of their nearest rivals’ games on Sunday with a 2-0 win over Mallorca at San Mames.

Levante were denied a first win of the season in second-half stoppage time as Sergio Navarro’s 93rd-minute equaliser earned Rayo Vallecano a 1-1 draw in Valencia.

Roger Marti’s penalty put the hosts ahead before half-time, but dominant Rayo finally found a way through to move into the top half of the table late on.