Teenage prodigy Emma Raducanu won her maiden Grand Slam title fewer than three months on from her wildcard entry to Wimbledon as the world number 338.

The 18-year-old became the first British woman to win a major since Virginia Wade in 1977 when she defeated Canadian 19-year-old Leylah Fernandez in the first all-teen US Open final since 1999.

Here are a few things you may not know about Britain’s rising star.

She’s a bit of a petrolhead

Between the ages of five and eight, she used to do go-karting, starting out in a bus garage in Streatham before moving on to a proper track – and from the age of nine, she also did motocross.

In her spare time, she still likes to dabble in both go-karting and motocross – although it feels as if she might struggle to find the time for too much of them after her rise to stardom.

She can speak Mandarin & loves Romania

Raducanu was born in Toronto, Canada, to a Romanian father, Ian, and Chinese mother, Renee, before moving to London at the age of two.

She says she is “quite capable” in Mandarin, and loves nothing more than binge-watching Taiwanese television shows.

Raducanu has also spoken previously of her fond memories of visiting her grandmother, Mamiya, in Bucharest, Romania.

“I go back a couple of times a year, stay with her, see her. It’s really nice. I love the food, to be honest,” she said.

“I mean, the food is unbelievable. And my grandma’s cooking is also something special. I do have ties to Bucharest.”

She went to the same school as Asher-Smith 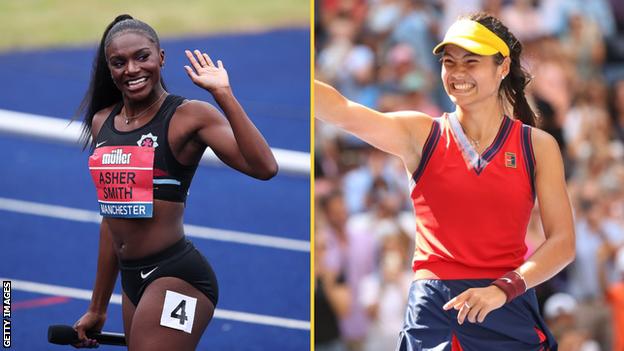 If you want your child to excel in sport, sending them to Newstead Wood School in Orpington is apparently the trick.

Raducanu’s school, where she sat maths and economics A-Levels just a matter of months ago, was also attended by world champion sprinter Dina Asher-Smith.

They were never there at the same time, however, with Olympian Asher-Smith seven years Raducanu’s senior and therefore leaving before the future tennis star joined.

Speaking on BBC Breakfast during her run to the fourth round at Wimbledon in July, headteacher Alan Blount said they always knew Raducanu was a “rising star”.

Rallies against the garage have paid off

Raducanu only made her WTA Tour main draw debut at the Nottingham Open in June, where she was beaten by compatriot Harriet Dart in the first round.

That followed a period without any competition due to the UK lockdowns caused by the coronavirus pandemic.

For 15 months, the development tours underneath the main WTA Tour were put on hold but, even with her A-Level exams on the horizon, Raducanu would not let that get in her way.

“During lockdown she was always playing outside against the garages. The weather didn’t stop her either – she was out there rain or shine,” one neighbour said.

She has already achieved a lot…

Raducanu’s potential was clear from an early age, with a third-place finish at the prestigious Junior Orange Bowl tournament – a competition where she first encountered US Open final opponent Fernandez.

She won UK national titles as an under-nine, under-12 and under-16, claimed her first ITF junior title at 13 and reached the quarter-finals of the girls competition at Wimbledon in 2018.

It was at junior Wimbledon in 2018 that Raducanu most recently faced Fernandez, defeating the Canadian in straight sets.

Despite those achievements, not many could have foreseen the extent of her meteoric rise in 2021.

She shone at Wimbledon as a wildcard in June as she reached the fourth round on her major debut – becoming the youngest British woman to make the last 16 in the Open era.

Although that run ended in heartbreak, with the Briton forced to retire for medical reasons, Raducanu has surpassed that run to light up the US Open.

Now the first British woman to win a Slam for 44 years, it seems the decision to put motorsport on the backburner was a good one.