Gary Neville and Jamie Carragher disagree on whether Cristiano Ronaldo or Lionel Messi should be seen as the greatest player of all time.

Ronaldo’s scoring return to the Premier League has sparked renewed debate about his standing in football history and Neville posed an intriguing question to help provide the answer on Monday Night Football.

“If you were a manager and you could pick any player in history to come off the bench at their peak to win you a game and you only had one substitution left, who would it be?

“It would be Cristiano Ronaldo,” said Neville.

“It would absolutely be Cristiano Ronaldo.

“He can score penalties. And if you stick him in the box and hang it up there he will go and score with a header. He might even score with a free-kick.

That opinion will doubtless upset fans of Ronaldo’s great rival but Neville elaborated on his explanation as to why his former team-mate is ahead of Messi.

“There is no doubt that Messi has scored an obscene amount of goals, he is a ridiculous player,” added Neville.

“It just took me to the point where he is more complete.

“The international goals, the Champions League wins, in teams that were not as good as the teams that Messi played in, just takes me to the point where I think he is the greatest player of all time.”

“You are talking about the different types of goals,” Carragher told Monday Night Football.

“Messi is also a playmaker. Messi can run a game. Ronaldo cannot do that. Again, not a criticism. But there is no way in the world he is the greatest player of all time.

“Two wonderful players. In terms of all the attributes, Ronaldo is a more complete player. He can do things that Messi can’t in terms of his weaker foot and in the air.

“But Messi can take you to a place where you can’t actually believe what you are seeing. What Ronaldo does is what other players can do, Messi can do things you have never seen before.”

Neville on how Ronaldo’s game has changed 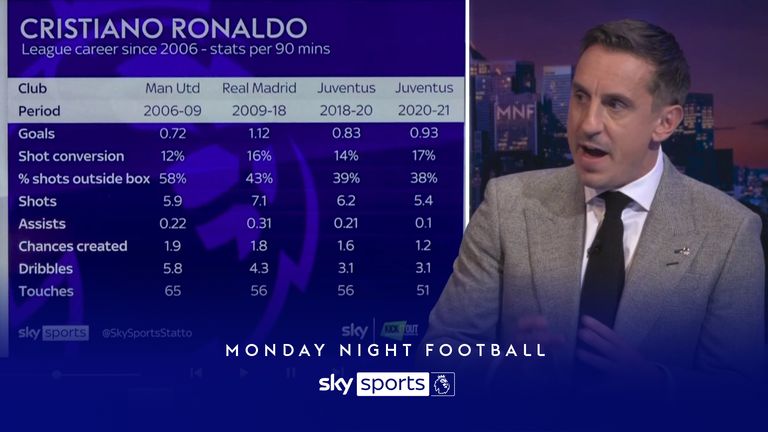 At 36, the Ronaldo who has returned to Manchester United is seen as some way past his peak but has he proved against Newcastle, he can still make a big impact.

“This is a different Ronaldo second time around,” said Neville.

“The best way to look at his career and how it has evolved, his involvement in the build-up is limited. If you look at his touches, he goes from 65 touches at Manchester United and it is decreasing year on year.

“He is going from a winger who is involved in the game regularly to someone who is now essentially playing in the penalty box and having a lot fewer touches.

“Again, his dribbles are nearly half what they used to be at Manchester United. He is not going wide, getting on the ball and going past people. That is not saying he will never do it but it has decreased enormously.

“So all these stats are telling you that this is a penalty-box footballer who is restricting his play outside of the box, far greater than at any moment in his career, because of his age.

“But then you look at his stats that are going up, the stats that are improving. Shot conversion has gone from 12 per cent at United to 17 per cent last season at Juventus, his highest ever level, the best of his career.

“His goals, he is at 0.93 goals per 90 minutes last season for Juventus. That has always been high from his third or fourth season at Manchester United.

“It just tells you what Manchester United have signed. This is a number nine. This is no longer the player who will counter-attack from box to box regularly in matches.

“He will hopefully – from Manchester United’s point of view – make a big difference in the games where there are narrow margins.

“Manchester United had seven nil-nils last season, the most that they have ever had in Premier League history. They drew 11 games overall and lost six, finishing 12 points behind Manchester City.

“If you are Ole Gunnar Solskjaer thinking about Cristiano Ronaldo, you are looking at stats like that. Is he the man to score a goal in narrow-margin matches. I know it is hypothetical but if they can convert those nil-nils to wins then Manchester United are champions.

“That is the question now. Is Cristiano Ronaldo going to be enough to make Manchester United champions this season?”

Alice Piper is joined by Sky Sports football writers Charlotte Marsh and Ron Walker to discuss the big talking points from the weekend’s action as Premier League football returns after the international break.

PART 1 | Ronaldo’s second debut assessed, what did he change? Can he lead Man Utd to the title? Will Newcastle fans’ protest against Steve Bruce change anything? (0:48)

PART 2 | Is Romelu Lukaku the ‘complete striker’? Are Chelsea showing their title credentials, and what does a first win – and goal – of the season do for Mikel Arteta? (16:58)

PART 3 | What does Liverpool’s bright start mean for their title challenge? Have Spurs hit a bump? And who’s caught the eye in the opening weeks of the season? (32:17)