Gunasekera pointed out that the minister had forcibly entered the Anuradhapura prison on 12 Sept. around 5.30 pm in the wake of the government turning a blind eye to his earlier drunken raid on Welikada prison on 06 Sept. Gunasekera served as the Prisons Minister after the end of the war in May 2009. The former minister stressed that on both occasions the State Minister in a state of inebriation had been armed with a pistol and was accompanied by several others. Law enforcement authorities couldn’t afford not to investigate the incident, the ex-minister said, referring to the presence of a woman among the crowd that entered Welikada and they went onto visit the gallows.

Prison sources said that Ratwatte had arrived at the Anuradhapura prison after being to week-long Sathi Pirith chanting ceremony at Anuradhapura sacred Mirisawetiya compound in order to invoke spiritual blessings for eradication of COVID-19 epidemic from Sri Lanka and the world. The pirith chanting culminated on the following day evening after conducting a special Buddha Pooja.

“Conduct a proper investigation or face the consequences,” the former General Secretary of the Communist Party told The Island, pointing out the responsibility on the part of the ruling SLPP to conduct its own inquiry. 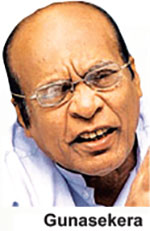 SLPP General Secretary attorney-at-law Sagara Kariyawasam said that the matter could be taken up with Prime Minister Mahinda Rajapaksa, who is also the Chairman of the party on his return from an overseas visit. Lawmaker Kariyawasam said so when The Island asked him whether the party would initiate disciplinary action against Ratwatte.

Speaker Mahinda Yapa Abeywardena, also a member of the SLPP, should brief the Parliament how he intended to address this issue, Gunasekera said. The outspoken political veteran said that the Police Headquarters should make a public statement on those incidents.

Gunasekera emphasiSed that the Anuradhapura incident could have been averted if the government took tangible measures in the wake of Ratwatte’s raid on Welikada prison several days before.

Alleging that the Prisons Department suppressed both Welikada and Anuradhapura incidents, Gunasekera questioned the rationale in Ratwatte being allowed to avoid a proper investigation by giving up Prison Management and Prisoners’ Rehabilitation portfolio and also queried how Ratwatte could be allowed to continue as the State Minister of Gem and Jewellery related Industries as if nothing had happened.

Pointing out that UN Resident Representative in Colombo Hanaa Singer as well as the Tamil National Alliance (TNA), the Tamil National People’s Front (TNPF) and the Center for Policy Alternatives (CPA) roundly condemned Ratwatte’s actions; Gunasekera said the government would have to face grave consequences unless a proper investigation was conducted. The government should inquire into those incidents taking into consideration the ongoing Geneva confab and the forthcoming UNGA.

The former minister pointed out that the Prisons Media Spokesman and Commissioner Chandana Ekanayaka denied any knowledge of the incident.

The CP heavyweight recalled how thousands of LTTE cadres and suspects brought under the military and the Prisons system at the conclusion of the war in May 2009 were protected. Those who had been campaigning against Sri Lanka at the UNHRC and the UN would exploit Ratwatte’s actions, the former lawmaker said, adding that the ruling party seemed bent on causing its own destruction.

Gunasekera said that recently Defence Secretary Gen. Kamal Gunaratne and IGP C.D. Wickremaratne explained measures taken by the government to eradicate the underworld especially those directing the narcotics trade from within prisons. They assured the public of safety and security. However, Ratwatte’s raids on Welikada and Anuradhapura prisons underscored the reality, Gunasekera said and called on the Prisons Chief to explain his failure to address the Welikada incident.

Police headquarters hasn’t so far issued an official statement on incidents at Welikada and Anuradhapura.

Ratwatte was sworn in as the Prison Management and Prisoners’ Rehabilitation Minister in the wake of the Mahara Prison riot in late Nov 2020. Ratwatte succeeded Dr. Sudarshini Fernandoplle.