“The sins of the father will be laid upon the children.”

It is a terrible, a terrifying curse that the sins of one generation will be visited upon successors. Some Christian sects, to this day, hold the Jews responsible for the murder of Jesus Christ though a learned Christian scholar, Lay-Preacher and friend assures me that this is perverse – Pontius Pilate must carry full responsibility he declares. But another with lesser ecclesiastical credentials (he never would have made it to Lay-Preacher though lay was not the obstacle) assures me that unlike JR in 1983, Pilate had good reason to fear that he had no choice and that the mob threatened governance. Actually, JR never made that lame-duck excuse – I think he rather enjoyed watching it. (Aside: Ranil was JR’s nephew in whose Cabinet he loyally served throughout the treachery and slaughter – Bahu please note).

Two organisations are paying a high price for their past, the blame for which is laid on their heads. The example in the headlines this month is the Taliban. The curses of centuries of faith-based relics have submerged it, though internal conflicts may still reverse the worst of the dark age. The other, always in the rear-view mirror of Lankan politics are the 1971 and 1989 events. I promised in a previous piece that I would stop bugging the JVP for long ago follies for which present leaders bear no responsibility. I intend to keep that promise. The misfortune is that that we the NPP still face “Didn’t your people do that?”, “Can we trust them again?” and such flak. A giant blunder by one generation of comrades hangs over the heads of their successors. This piece however is about the Taliban, a theme to which I seem to be getting addicted.

That Chairman fellow said “Women hold up half the sky”, but the Taliban by imposing cruel dress codes and obsolete conduct on unwilling women who have tasted personal freedom for two decades have created an implacable foe. (If some prefer to adhere of their own volition, that’s fine). Opposition to gender oppression and the Pashtun power grab will ignite conflict. There were sporadic protests by small groups of women earlier, but on September 7 a large one, thousands strong marched for miles through the streets of Kabul and was finally dispersed by shots in the air. There are videos of beating and detention of well-disciplined women protesters by bloody fool machismo in the lower ranks of the Taliban who will have to be crushed. It remains to be seen if the leadership has the guts to do this or whether it will go the way of all Lankan regimes on inter-racial and religious injustice. I am not holding my breath. On September 8 the regime impose a ban on demonstrations; this will be defied. If the Taliban mows down Afghan women with grapeshot what is left of its Islamic credentials? 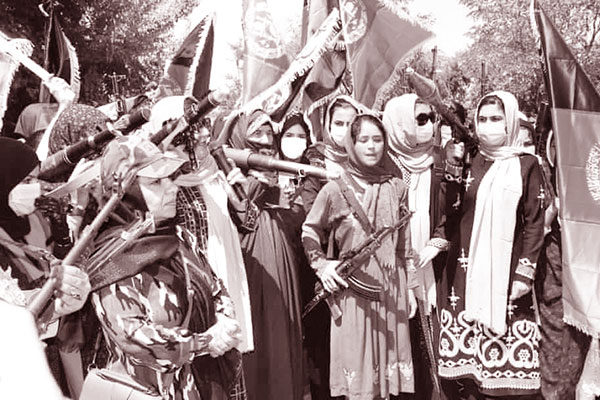 So far, I have written in support of the expulsion of NATO. This has been done and now Act 2 of the drama has commenced. It is time to hold the Taliban to acceptable standards of human and democratic rights but instead it has formed an all-male mainly Pashtun government of aged hard-line dotards and given the lie to promises of ethnic inclusivity and recognition of women. It has slipped back to primeval faiths and primitive customs. The Taliban Education Minister who has never been to school, when challenged about his fitness for the job responded: “Education is irrelevant so long as you are pious.” There will be a push back by younger Taliban cadres as the economy goes into free fall and conflict with women and non-Pashtun ethnic-minorities swells. I am of the view that we are passing through a period in which nothing is settled and foresee changes within the Taliban and in the nature of the state.

Foreign occupation has had contradictory effects. On the one hand liberal values and a liber-democratic state were the proclaimed objectives. On the other hand, drones and artillery killed thousands of civilians, the Afghan army murdered and plundered, and billions of dollars unloaded on foreign contactors spread a plague of corruption from the President down. In sum the occupation was a disaster and a failure.

Saudi Arabia, the Gulf States, Iran, the Taliban regime and some others impose dress codes, curtail commonplace democratic rights, deny education and horse whip or stone to death women who defy primitive religious injunctions imposed on all whether these practices are egregious to other genders, faiths or ethnic collectives. (I avoid the term Islamic as I am not schooled in whether Islam actually sanctions such incongruity and cruelty). In the best-case, the Taliban will see the writing on the wall and retreat, give or take a few tactical adjustments. If it is deaf to half its population it will engender a women’s uprising; these women have nothing to lose but their chains and a world to gain. It will take time for a clandestine but identifiable leadership to mature and resistance organise itself. The Taliban does not want to give any rights to women and it will concede only what it is compelled to by domestic and international pressure.

The best Sri Lankans of all faiths, ages, communities and genders can do is to extend moral and if possible practical support to women enslaved by confessional states. Did you know that Afghans were making creative and aesthetically sensitive films from well before Taliban-I? Muslim women in open societies have shone in the professions, academia and public service. Their fathers, brothers and husbands now have a duty to help this process everywhere. It is a shame that Islamic clerics and Muslim laymen and scholars across the world have failed to denounce the Taliban’s behaviour. Many, not only in the thuggish lower ranks, who obstruct progress gun in one hand and whiplashing women on the streets, are alarmed by their own limited educational and intellectual horizons and nativist ignorance. That’s the long and the short of it.

The New Taliban Government: a formula for strife

The Taliban proclaimed an Islamic Emirate, but a Republic is emerging on the streets of Kabul and Herat. Two weeks ago I wrote about the internal dynamics in political movements in watershed periods. It is necessary now to admit that in Afghanistan and in the Taliban the first round has been won by the reactionaries. Nevertheless, professed pieties and hermetic decision making notwithstanding, the conflict within Taliban driven by anger on the streets and dissent in the countryside, is only beginning. Yes true, the Taliban did not fight for 20 years in the mountains to win power and then create a liberal state. Nor do the hardliners care a whit about the hardships people suffer without medical services and food. What will forces change within the movement is if these deficits provoke challenges to its power in the country at large, and if internal cracks within the Taliban widen under stress. The real world will in the end win over the imagined world of faith, ideology and ignorance.

You would be justified to reckon that the government was formed in a home-for-the-aged. Aging Mohammad Hassan Akhund, an aide of the Taliban founder Omar, is PM and Abdul Ghani Baradar his deputy. Omar’s son Yaqoob is defence minister. Two senior Haqqani network members, leader Sirajuddin Haqqani and his aging uncle Khalil Haqqani are interior minister and minister for refugees respectively. Akund, Siarjuddin and Khalil are on UN sanctions lists for terrorism. It’s as if after victory in the Panjshir Valley they cocked their thumb at the world, especially the West and said “Bugger off! We won the war. We will do as we please”. That in broad terms is the government though described as “Interim”. Unsurprisingly, Beijing welcomed the new government. It is playing at global foreign policy and currying favour with the Taliban not to interfere with its repression of Uighur Muslims. China will be of no help in the democratisation of Afghanistan (or Sri Lanka or Burma or anywhere).

The leaders professed that women will play a prominent role and have access to education, but they were excluded from talks when forming a government and there is no longer any mention of a ministry of women’s affairs. About 40% of school children are girls and 30% sitting the university entrance exams are women; unrepentant religious aboriginals in the leadership will attempt to roll all this back. I keep returning to the women’s issue because my sense is that repressing women who have tasted education and employment and then oppressing them socially is not sustainable and will engender conflict. Attempts to impose a Pashtun state on other ethnicities by an aged ideologically primitive leadership in the context of an economic meltdown will aggravate conflict and create splits and realignments within the movement. This may bring younger leaders to the helm and then modify the state itself. The signals as yet are mixed. If the leaders refuse to budge, conflict between the people and the Taliban will break into the open. This is not a desirable scenario; a compromise is better.

This essay has continuity in views and content with my column of September 5, “A perspective on conflicts in the Taliban” which readers may wish to consult.