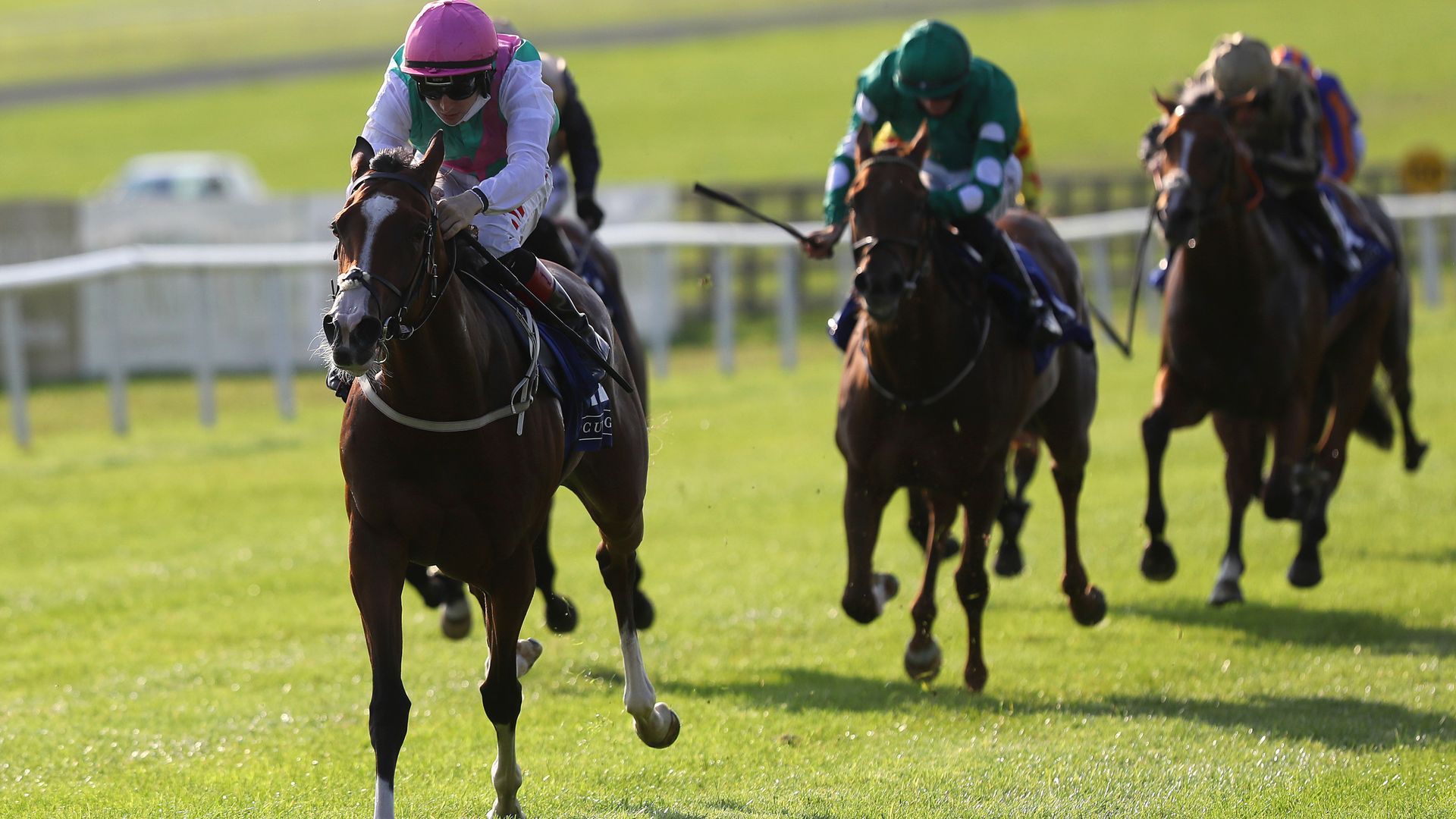 It is 10 years since Lightening Pearl provided Ger Lyons with his first Group One victory in the Juddmonte Cheveley Park Stakes – and he has a strong chance of repeating the dose with Sacred Bridge.

The unbeaten filly is owned by the sponsors, and Lyons credits the late Khalid Abdullah with raising the quality in his yard in recent seasons, seeing it as a great compliment that he is now on their roster.

Having won the Irish Guineas for the team with Siskin last year, Lyons is holding on to the dream that Sacred Bridge may be another Classic contender, but first his sights are set on Saturday at Newmarket.

“I suppose they’d be similar, but Sacred Bridge would be more precocious, because I never had Lightening Pearl as a Cheveley Park horse,” he said.

“I had her as a miler – but the more we ran her, the faster she got.

“This filly has always just rocked up. I never went to the races cocky that she’d win. I thought she’d run well in her maiden but improve for the run. But the only time I got a ‘wow’ off her was the last day.

“The Ballyhane (sales race at Naas) was a good, tough performance, but was that a Group One performance? No. I kept expecting something to beat her but after the last day, I felt she deserved her place at the top table.

“I think the secret to her is fast ground, and the way she did it in the Round Tower was visually spectacular. Anything she had done before that, while I’m not knocking it, wasn’t.”

Should Sacred Bridge win, however, Lyons is unlikely to be involved directly in any of the celebrations because he believes he is of more use at home.

“I don’t like going racing because I get more done at home,” he added.

“When you are there you are pulled this way and that, and I actually missed all the photographs (when Lightening Pearl won) afterwards. I just find it a lot of wasted time.

“At home with lots of runners, your mind is kept busy – but over there, your whole day is wasted on one run. It’s nice when they win, though.”

It took Lyons longer than expected to make the breakthrough at the top table, but he is well and truly there now, with Even So landing the Irish Oaks last year to add to Siskin’s Guineas.

He said: “In my head I was always going to be training Group One winners, and I couldn’t understand why it was taking so long. Then when it happened, I was telling myself not to get carried away because it took me long enough!

“This is why we do it. The Cheveley Park has been good to me, and I’d like to do it again. Group One horses are few and far between, so when you get one you cherish them.”

While all Sacred Bridge’s wins to date have been over five or six furlongs, Lyons hopes she could get further next season.

“I trained her sister Viadera, who is doing well in America, and this filly is bred to get a mile,” he said.

“She doesn’t show you this (speed) at home, she just goes through the motions. I’d like to think she’ll get the mile.

“The other theory is that when they are showing you this over six furlongs, why change it? We’ll change it when we need to, and we’ll know more on Saturday. She’ll hold entries in the Guineas but she’ll also be in the Commonwealth (Cup at Royal Ascot).

“I don’t know that she’ll get the mile. But I think she will and (jockey) Colin (Keane) is not negative either. Her attitude will help her get the trip – it’s a lovely, high-class problem to have.”

The fact Lyons is producing Group One runners for Juddmonte is also giving him a huge sense of satisfaction.

“I can’t overstate what the connection with an outfit like that has on my business. It’s a huge pat on the back for Glenburnie (his County Meath yard) that they entrust us with their horses,” he said.

“When they send them they literally could be anything. It’s like waking up on Christmas morning when you are very young.

“Yes, you get ordinary horses too, but you also get horses like yesterday (Straight Answer) or Sacred Bridge and you have a chance with what you get to compete at the top table.

“I take it as a huge compliment, and it’s something I’m very proud of.”

Lyons will also be represented in Saturday’s Juddmonte Middle Park Stakes by Dr Zempf, who already has a Group One second to his name in the Phoenix Stakes.

“Dr Zempf is a lovely colt and he’s definitely our Guineas horse,” he said.

“I would much rather be going seven furlongs with him, but we’re erring on the side of weakness at the moment.

“Colin has always said to stick to six furlongs for the minute. I think it’s the six which has been getting him beat up to now. Colin did say he’d reverse the Railway (Stakes) form (with Go Bears Go), and he was right, (but) then we bumped into one in the Phoenix (Ebro River) which is grand.

“He’s still in the Dewhurst, and I would have loved to have gone National Stakes/Dewhurst, but Colin thinks he’s still on the weak side. I can’t wait for next year to step him up to seven.

“I know the two horses I’m sending are in the right races and will be competitive. Whether they are going to be good enough, they might not be on Saturday but they will be one day. They are two nice horses.”