Public Security Minister Rear Admiral (Retd) Sarath Weerasekera told Parliament on Wednesday (22) that Sri Lanka would be under threat as long as the IS ideology promising 72 virgins in paradise for those who sacrificed their lives in the name of Jihad existed.

“Anyone who believes in that ideology could carry out an attack any time. It is not easy to identify them,” the minister said, responding to a question by SJB Colombo District MP Mujibur Rahman.

Minister Weerasekera said that Ven Gnansara during a recent TV talk show highlighted the same threat and Muslim MPs instead of trying to find faults with the messenger should support the government to get rid of terror ideologies from society.

MP Rahman said: “Ven. Gnanasara has recently made a statement during a live telecast on Hiru TV that there would be another terror attack. He said he had informed the President of the threat. He also said that he had all information including the details of the explosives and where the attack would take place. What action has the government?” 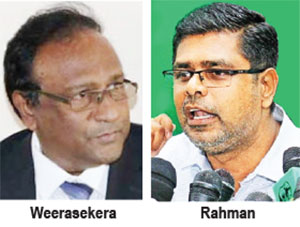 Minister Weerasekera said that inquiries had been made from Ven Gnanasara Thera regarding his statements. “When Ven Gnanasara was questioned by investigators, the he said that he made those statements based on the Al Quran. Ven Gnanasara Thera said that there is a Sinhala translation of Al Quran by Abdul Razeek of Sri Lanka Thowheed Jamaath. That translation contains some sections which may motivate the Muslims to engage in clandestine activities in the name of their religion. He also said so in the TV talk show.

Weerasekera said that Wahabism’s aim was the creation of a theocratic state ruled by an Islamic leader with the title of Caliph. “This ideology is espoused by ISIS. It is not easy to detect persons believe in Wahabism. This is why its hard to make arrests. For example, the Lankan born Islamic terrorist who launched a recent attack in New Zealand had been under surveillance since 2016. Later, he was released by court. He erased pro-ISIS documents and videos from his computer but he did not erase the ideology from his mind.”

The terrorist had knifed innocents believing that he would go to paradise and live with beautiful virgins, the minister said, adding that there were many such people in Sri Lanka.

“There cannot be different laws for different religions. These laws nurture extremist ideologies. Ven Gnanasara’s is right when he says extremists can carry out terror attacks any time. We have strengthened our intelligence network on account of this threat. We need the support of the Muslim people and their organisations to arrest persons who can become a threat. It is wrong to make allegations of racism whenever security forces arrest such extremists. In the aftermath of the Easter Sunday attacks we have detained some people who held and propagated the IS ideology, funded such teachings and associated closely with those who carried out the terror attacks,” he said.

The Minister added that there are Muslim MPs who speak on behalf of those detainees. The terrorists who carried out the suicide terror attacks at the Shangri-La were two sons of a business tycoon.

“They were educated and wealthy. If such educated persons fall prey for the promise of 72 virgins in heaven, what about the youth who have no such education and money? It is not a task difficult to recruit an average Muslim youth with this ideology. They are exposed to teachings that justify terror and killing innocents in the name of religion. They lobbied and exerted pressure on the authorities to release the terror suspect who thereafter carried out a knife attack in New Zealand. Now you see the results.”

Weerasekara said that a leader of the student organisation of the Jamaat e Islami had been involved in damaging Buddha statues in Mawanella. For 25 years the leader of Jamaat-e- Islami had been Rasheed Hajjul Akbar. The man wrote a book which states that Jihad should be launched to protect Islam and that lives had to be sacrificed to achieve that goal.

” Akbar was arrested by the Yahapalana government and MP Mujibur Rahman pressed for his release. This is an MP that spoke highly of the Jamaat-e-Islami. Later, Akbar was released without conditions. The Presidential Commission of Inquiry on page 270 of its report has identified Akbar as one who propagated the creation of an Islamic State in Sri Lanka. The Attorney General should take action to prosecute him for promoting this ideology. The two sons of Akbar’s brother were involved in destroying Buddha statues in Mawanella. They and suicide bomb attacker at Dehiwala were members of the student wing of this organisation. Jamaat-e-Islami literature justifies suicide attacks and it was Akbar who channelled funds for sending Lankan Muslims abroad for training in the 1990s. Muslim MPs got him released. It was our government that took him into custody again. There are such terrorists at large. They are the ones Ven. Gnanasara Thera has warned of. This is much more complicated than the LTTE. We will arrest those who should be arrested and rehabilitate those who should be rehabilitated. We need your support to keep the country safe.”