Prof. Samarajiva concerned about some sections of agreement

The agreement with the New York based US firm would result in a catastrophe and the loss of state control of the energy sector could pose a threat to national security, Perera said.

Perera pointed out that the agreement had been finalised in a way that it didn’t come under the purview of Sri Lankan law. Responding to another query Perera said that it would be pertinent to ask whether the government had consulted the Attorney General on the questionable agreement.

Pointing out the danger of agreeing to international arbitration in respect of the US energy agreement, Perera said the issue at hand should be examined against the backdrop of the debt trap and the crisis in sharply weakened foreign reserves. The PNP spokesperson said that successive governments pursued agendas inimical to the country. The SLPP government was no exception, Perera alleged, urging all stakeholders to reach consensus on matters of national importance. “The US deal is nothing but a disaster. Government cannot act in such an irresponsible way,” Perera said. 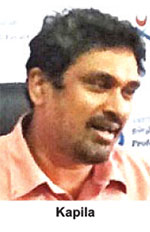 Meanwhile, Prof. Rohan Samarajiva says he is supportive of PPPs (private and public partnerships) to bring in foreign capital and expertise, but PPPs should be based on a transparent process to secure the best possible price. “A transparent process whereby we know that the best possible price has been paid and the technical criteria have been satisfied.” He said it was certainly not the case as regards what he called a cloudy transaction involving the government of Sri Lanka and the US-based gas-to-power developer New Fortress Energy.

The one-time Director General of Sri Lanka Telecom (SLT) and political analyst said so when The Island sought his opinion on the US investment on the Yugadanavi power plant aka Kerawalapitiya power station operated by the West Coast Power Limited and the New Fortress Energy receiving the right to build a new LNG plant off Colombo.

The 300MW plant is owned by the country’s largest power supplier LTL Holdings, which is under government control.

Commenting on the recently concluded power deal, Prof. Samarajiva expressed serious concerns over certain provisions in the agreement. One-time DG, Sri Lanka Telecom recalled how exclusivity provisions given to Japan’s Nippon Telegraph and Telephone Corp (NTT) in respect of SLT caused serious issues. Prof. Samarajiva said: “In respect of the agreement with New Fortress Energy, the exclusivity provisions that have been reported are worrisome. I had enormous problems with the five year exclusivity given to NTT when they entered into a PPP on SLT in 1997. The excuse was that it was war time (true) and the rate rebalancing had to be completed (somewhat true). There is no war now, and there is no reason to give a broad exclusivity. If it is not time bound, it’s a recipe for disaster.”

Commenting on the challenges faced by Sri Lanka, Prof. Samarajiva said now that Chinese leader Xi Jinping has announced that China will no longer build coal plants abroad, there wouldn’t be any more additions to Norochcholai. “We need baseload capacity, so I guess LNG is the right fuel. But this must be placed in the larger context of the potential use for cooking and automotive uses. This seems disconnected from a larger plan. Should this be in Kerawalapitiya or in Hambantota/Trinco? Perhaps the right answer is Kerawalapitiya, but the assessment should have been done.”

The Island: At a time, the government has invited foreign investment with the focus on the Colombo Port City, how do you see the growing opposition to the US firm investing in the energy sector here?

Prof. Samarajiva: “The government is hobbled because of the cheap sloganeering while in opposition. But if they admit fault and speak the truth to people I believe it’s possible to marginalize Minister Wimal Weerawansa and his ilk.”

The Island: Do you think the government and the Opposition should seek a consensus on vital national matters such as foreign investments in key sectors?

The Island: What should be the role of the parliament in such an endeavour?

Prof. Samarajiva: “I believe the crisis has reached a level where a national government should be formed. Parliament is where we should start.”

Prof. Samarajiva said that with the national economy in tatters in the wake of unprecedented devastation caused by the raging Covid-19 epidemic, the country was in such a deepening crisis the Parliament should move as an institution.