Sophie Cunningham led the fifth-seeded Mercury during a third-quarter turnaround and finished with 21 points. Phoenix’s Brittney Griner had 16 points and 10 rebounds, and Turner finished with 12 points, nine rebounds and five assists.

Phoenix, who were 19-13 in the regular season, will travel to face the fourth seed Seattle Storm in a second-round game on Sunday night. The bad news for the Mercury is that star Diana Taurasi missed a fifth consecutive game because of an ankle injury despite being expected to return. Betnijah Laney had a game-high 25 points, Natasha Howard had 16 points and 10 rebounds, Sabrina Ionescu added 14 points and 11 assists and Rebecca Allen scored 11 to lead the eighth-seeded Liberty, who were 12-20 in the regular season and only secured their playoff spot on the final day.

The score was tied five times in the fourth quarter before Howard made consecutive baskets to give New York a 75-71 lead. Cunningham made a three-pointer but Allen answered with a jumper for a 77-74 lead with 2:42 remaining.

Diggins-Smith’s three-pointer tied the score at 77 just over a minute later, but Ionescu answered with a basket for the Liberty’s final lead with 1:29 left. Cunningham’s three-pointer and Diggins-Smith’s layup then gave Phoenix an 82-79 advantage with 50.6 seconds left. Laney’s three-pointer tied the score with 2.7 seconds to go before Turner was fouled while attempting a layup and made the second of two free throws.

Kahleah Copper scored 23 points and Candace Parker tallied a double-double as the sixth-seeded Chicago Sky also advanced to the second round of the WNBA playoffs with an 81-64 decision over the seventh seed Dallas Wings in Chicago. 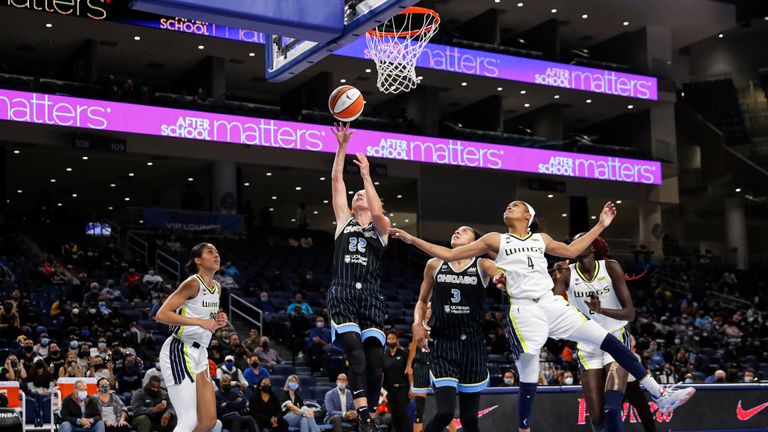 Highlights of the first playoff-round game between Dallas Wings and Chicago Sky in the WNBA.

Arike Ogunbowale rebounded from a two-point first quarter to pump in 22 points for the Wings, but it wasn’t enough to move them to the next round. Satou Sabally came off the bench to score 12, but Dallas converted just 36.2 percent of their field goals while getting outrebounded 47-35.

The Wings sliced a 21-point first-half deficit down to 55-52 in the first minute of the fourth quarter before Chicago finally put this one away. Vandersloot rattled off six straight points in 72 seconds, giving the Sky an insurmountable 76-62 lead with 1:15 remaining.

Chicago will play on Sunday night away at the third-seeded Minnesota Lynx while Phoenix will play the Seattle Storm. Both games are live on Sky Sports Arena, tipping off at 8pm.