Jamie Carragher teared into the positioning of Tottenham’s midfield on Monday Night Football after the defeat at Arsenal, claiming ‘there’s less space on the moon!’

Tottenham were 3-0 down within 34 minutes at the Emirates, prompting manager Nuno Espirito Santo to bring off midfielder Dele Alli and Japhet Tanganga at half-time, and after the game claiming: “I won’t name individuals who didn’t play the game plan right but the game plan was not right according to the players who were on the pitch.”

But Carragher feels Nuno was equally culpable in the defeat, saying the midfield shape from the first minute was like nothing he’d ever seen in his life.

Carragher said: “I’ve been doing this show now for eight years. Whenever I see a performance like that, I always look at players first, as I have on this. I think managers often take too much criticism, and often it’s down to the players.

“There were some shocking performances from Tottenham players, but I think the manager was equally culpable in this result in how he set up. When people question a manager, we always hear: ‘There was no plan’ – but there’s always a plan at this level in football. Wen you analyse it: I’m not sure how this plan was ever going to work.”

FREE TO WATCH: Highlights from Arsenal’s win over Spurs in the Premier League.

Carragher’s scathing analysis showed how Alli, Tanguy Ndombele and Pierre Emile Hojbjerg were miles apart from the first whistle of the north London derby, and claims that Spurs’ direct tactics were never going to work.

“One minute into the game: Dele Alli, Ndombele and Hojbjerg are the midfield players, and they are not in midfield positions. The only reason you’d stand there [so far from the ball and midfield], is if your manager has told you to go there.

“They wanted to go direct, but who to? Even if you win the ball, you need someone behind you to pick up second balls, but Dele Alli was on the same line as Harry Kane!

“When you look at the space in midfield… I don’t think I’ve ever seen anything like it in my life.

“Where would you want them? Surely not there. There’s less space on the moon than what you see in that midfield for Tottenham. It’s actually unbelievable. The manager must have told them where to go: this is before the first goal. It was always going to happen.”

Thierry Henry said the early blitz at the Emirates was in part down to Arsenal’s quality, as well as Spurs’ woeful positioning.

“You talk about the moon Jamie, but [Arsenal’s second] was like the Champs-Élysées, the best avenue you can see. We talk about Spurs and what they did, but take nothing away from Bukayo Saka, and how they wanted to enter these areas. The desire was there right from the start.”

Spurs have now lost their last three in the Premier League, having won their first three games 1-0. Nuno is also the first Spurs boss to lose as many as four times in his opening 10 fixtures since Glen Hoddle back in 2001.

Having replaced Jose Mourinho in the summer, Carragher says it remains to be seen whether the former Wolves boss is the right fit for Spurs, and advises the Portuguese boss to be himself and play to his own strengths.

Gary Neville feels that Harry Kane does not look himself at Tottenham after the transfer speculation surrounding him in the summer.

“That was a bad one for Nuno. You’re never going to talk about managers after five or six games in a job.

“Nuno is a good manager, he proved that at Wolves. But I hope he is himself in his job now. He’s seen as a pragmatic coach, but he wasn’t pragmatic enough in this game.

“I don’t know if that’s because he’s at Tottenham now and he’s worried that people will say he’s not on the front foot, but be yourself! It’s like [Sunday] wasn’t his type of fit.

“It doesn’t feel like a perfect fit, I must say that. On the back of Jose Mourinho, it almost feels like Jose Mourinho-lite. That’s not a criticism of him: Jose has won everything in the game.

“I had it in my career: Roy Hodgson was and is a really good manager, but he wasn’t the right manager for Liverpool. I think the Spurs fans are thinking early on now: ‘Is Nuno a Tottenham manager?’ That’s something that remains to be seen.

Nuno Espirito Santo says some Tottenham players didn’t implement their game plan at Arsenal in the 3-1 defeat on Super Sunday.

“He needs to bring his singings in, it’s early in the season, but my advice to Nuno and his coaching staff is to be yourself, do the job that you think is right. Whether that’s being more defensive, five at the back, do what you do well.

“Right now at the moment, they’re doing nothing going forward, but they are also open and look like they could get ripped apart every game. The first half was unbelievable to watch.”

Neville: What has happened to Spurs? 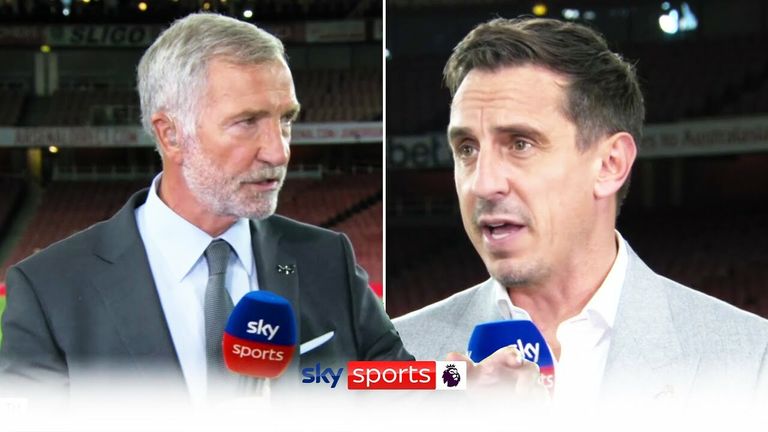 Gary Neville, Ledley King, Graeme Souness and Tony Adams go in depth on Tottenham’s performance in their 3-1 defeat to Arsenal, debating where Nuno went wrong, whether it is the players or the manager to blame, and how the issues can be fixed.

“Arsenal had a far better application to the game, but Tottenham’s game plan looked really basic. It looked like they just wanted to knock it forward at any cost, and they were playing aimless balls forward.

“Spurs’ courage to play, their appetite to win the ball back and get forward was completely different from what it was against Chelsea last week, and Arsenal ran all over them. It was a really poor first half.

“In the second half, you could say Harry Kane should have scored two or three goals and could have had a penalty. But Harry Kane is not right, there is something obviously not right with him at the moment, he doesn’t look happy at all.

“That’s a bad day for Nuno and those Tottenham players because their fans will have left the ground thinking there are more problems than just losing 3-1 to Arsenal.”