Watford are in talks to appoint Claudio Ranieri as their new head coach after sacking Xisco Munoz.

Ranieri, who guided Leicester City to the Premier League title in 2016, left his role as Sampdoria manager at the end of last season.

Watford sacked head coach Xisco Munoz after less than 10 months in charge on Sunday morning, with the club 14th in the Premier League after winning seven points from their opening seven games.

Ranieri, who will turn 70 later this month and has also managed Chelsea and Fulham, is known very well by the Watford owners and Sky Sports News has been told he was a candidate for the managerial job in the past.

Watford are expected to have a new boss in charge ahead of their next Premier League game at home to Liverpool on October 16.

Spaniard Munoz replaced Vladimir Ivic in December 2020 and guided the club to automatic promotion from the Championship last season.

Munoz’s last match in charge was a defeat against Leeds at Elland Road on Saturday – described as a “1-0 battering” by goalkeeper Ben Foster.

“The board feels recent performances strongly indicate a negative trend at a time when team cohesion should be visibly improving,” the club said in a statement.

“The Hornets will always be grateful to Xisco for the part he played in securing last season’s promotion and wish him well for his future career in football.

“No further club comment will be available until the imminent announcement of a new head coach.”

FREE TO WATCH: Highlights from Leeds’ win over Watford at Elland Road in the Premier League

Amid an overhaul of the club’s squad following their promotion, Watford saw captain Troy Deeney leave after an 11-year stay while first-team regulars Will Hughes and Nathaniel Chalobah also left.

Munoz, who is the first manager to be sacked in the Premier League this season, started the new campaign with a 3-2 win against Aston Villa at Vicarage Road.

However, four defeats in six league games have followed that win, with their only other victory coming at fellow newly-promoted side Norwich.

Munoz’s departure means the club are looking for their 13th different permanent manager since the Pozzo family completed their takeover of Watford in 2012.

Who would take the Watford job now? 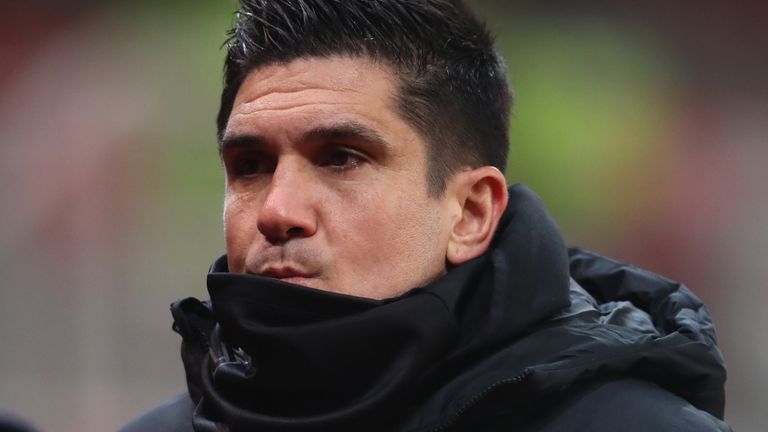 Speaking on Super Sunday Matchday, Daily Mirror assistant editor Darren Lewis told Sky Sports News: “If you sack a manager seven games in then you make your job finding a replacement for him even harder.

“I remember when they were looking for somebody to take the job before Xisco and that search took a long time.

“They have had 16 managers (including caretakers) in the last 10 years – that is a club with no longevity. Even if you do well, even if you do what they have asked you to do, you don’t get the time and breathing space to be able to build on your work.

“Who would want to take that job now?”