Gary Neville says there would be no Premier League title contest this season had Manchester City managed to snare Harry Kane away from Tottenham over the summer.

City came from behind twice to earn a 2-2 draw with Liverpool in a breathless and pulsating Premier League encounter at Anfield on Sunday, but the game further highlighted a lack of cutting edge in the champions during a dominant first half.

Pep Guardiola saw a £100m bid for England striker Kane rejected, and while City were open to including players in addition to the cash offer, Tottenham refused to budge and Kane ultimately declared an end to the saga on August 25 by committing to Spurs for another season.

The title race is shaping up to be the closest in many years as the season enters the October international break with the top four separated by just two points, but Neville, speaking on his latest podcast, believes it would have been a foregone conclusion had City signed a recognised natural goalscorer in the shape of Kane.

I still don’t feel like this is the same Liverpool team of a couple of years ago who were both blistering in and out of possession. Something has gone a little bit and there’s no doubt they’ve worked really hard over the past four or five years.

They look like they need a refresh to get back up to that level – the level they’re at now could still be enough to win them the title this season.

But they allowed City to gain a lot of confidence in the first half and they’re brilliant on the ball even when they’re not at their best. A Kevin De Bruyne who was absolutely flying would’ve punished Liverpool before half-time.

Jurgen Klopp will be happy that his team got a point, but Liverpool were at full-pelt to stay with this City team. City deserved to at least draw that game. 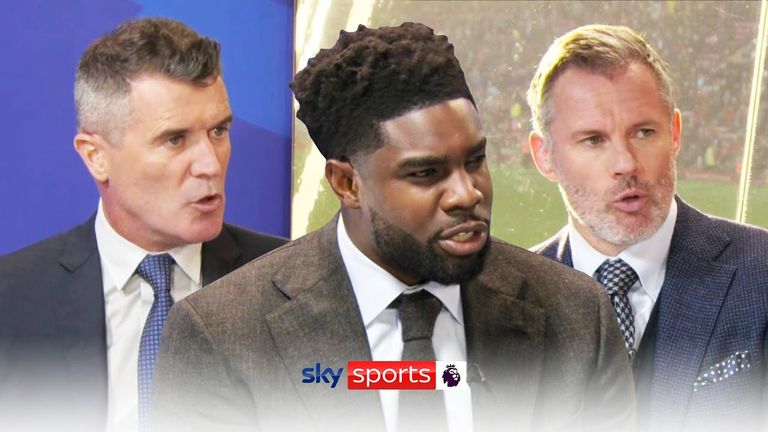 When City equalised a second time, Pep knew it was a big moment. It was one of the most ferocious celebrations we’ve seen from him. His team delivered. Chelsea could win the league, but this City team is special.

There is just one thing that stands in their way.

There’s just a pattern emerging of them not scoring. I know they scored two today, but really in the first half they should’ve been out of sight. Will that cost them come the end of the season?

Will they fall short because they just haven’t got that striker, who’s going to get those 25-30 goals for them? We know they can all contribute but they do lack that point up front.

Kane is gold. Forget the form he’s currently in. Against Liverpool with those City players, he’d have definitely taken one of those chances in the first half. The league would be done.

We’ve rightly praised City’s recruitment over the past few years and Guardiola gets the best out of them, but to not get a centre forward over the last few years has been a surprise.

With Edin Dzeko and then Sergio Aguero leaving, it’s not as if it’s come as a shock. Gabriel Jesus hasn’t quite been trusted by Pep and they didn’t go all the way for Harry Kane.

In the past, they’ve done the same in turning down the price for Alexis Sanchez – but then have a Plan B. You expect a club like City to have someone lined up as a temporary measure to play even for 12 months.

FREE TO WATCH: Highlights from the 2-2 draw between Liverpool and Manchester City

I know Pep likes to play with a team of midfielders, but there is that doubt that exists only through them lacking a striker. If Manchester City had Harry Kane, I’m telling you now this league is done.

It would be done. Forget the form that Kane is currently in. Against Liverpool with those City players, he’d have definitely taken one of those chances in the first half.

He’s gold, so he’d remove any doubt that I have about City.

Gary Neville, speaking on his podcast, felt that Ronaldo storming down the tunnel after Manchester Utd’s draw with Everton will have put immense pressure on Ole Gunnar Solskjaer and will need to be managed in the next couple of months.

I watched the game and I watched him walk off. I can’t say I liked it.

We know those things. He doesn’t have to prove that.

He walks off the pitch, muttering to himself, which throws questions up in the air. What is he saying? Who is he annoyed with? It can only come back to the manager.

Cristiano is smart enough to know actions like that will bring real pressure on the manager – more than he is already under.

It is what it is, but I think that is something that has to be managed in the next couple of months.

Cristiano is not always going to score and he maybe can’t play every game. But if he’s going to walk off like that, it’s going to put immense pressure on Ole Gunnar Solskjaer.”

Ole Gunnar Solskjaer says he has ‘no regrets’ for starting Cristiano Ronaldo on the bench following Manchester United’s 1-1 draw with Everton at Old Trafford.

The worst that could happen for me with Ole is that he’s been an incredible bridge, from a period where the club lost its identity and it lost its way.

There is no doubt the club lost its way in reaction to Sir Alex Ferguson’s leaving the club. Ole has returned some of the values to the club.

There’s a group of players who I think do want to play for the club. The signings have been a lot more Manchester United-like.

But I do now think with the signings of Cristiano Ronaldo, Jadon Sancho and Raphael Varane, recognised world-class talents, comes a pressure to deliver.

FREE TO WATCH: Highlights from Manchester United’s draw against Everton

Ole knows that. He said it in his press conference. He does have to win. You have to win a trophy when you’re three or four years in and you’ve got players like that.

He has to look after himself, Ole, he has to be selfish, he’s got to make sure that he manages Cristiano in the right way.

I think he’ll have a word with him and say, ‘Look, if we’re going to do that, let’s do it in the changing room’.

But Cristiano is not a sheep either. He’s not just going to follow and say, ‘I’m not going to say anything’. He will demonstrate his dislikes and his lack of happiness with situations.