My father, Sam Wijesinha from Getamanne, a village in Hambantota District, took pride in his Southern heritage. He knew D.M. Rajapaksa (DM), his brother, D.A. (DA) and their families well. Sam was Secretary General of Parliament for almost two decades till 1981, and the first Parliamentary Commissioner for Administration (Ombudsman) for 10 years thereafter. He worked closely with several political leaders during that time. Always courteous, he respected MPs who worked for the betterment of the people they represented.

According to Sam, DM was the first Rajapaksa to enter politics. In his D.A. Rajapaksa Memorial Oration of 2005 (Sunday Observer, December 25, 2005), He said that in 1944 when he was seated with DM at the Royal-Thomian cricket match, watching his son, George, bat, “DM was in an expansive mood and I asked him about his school days. He said they were exciting times with Sir Ponnabalam Arunachalam leading us, how his speeches attracted big crowds …. Then he said how it was sad the way our people let him down, not giving him a place in the Reformed Legislative Council of 1920. That was the beginning of our present ethnic troubles, he thought. It was around this time that he seriously reflected upon politics and went back to the village to take part in public life…” and “….start a lifetime of dedicated service.”

He said “DM represented the people of the Hambantota District …from March 7, 1936 till his untimely death on May 18, 1945.” and “The Leader of the State Council, Hon. D.S. Senanayake, in moving a vote of condolence said that ” From the day D.M. left Wesley College during the First World War (1914-1918,) he made the back-wood people of Ruhuna his own cause. He devoted his whole life to them with courage, independence and straightforward dedication.” According to Sam, when DM died, an unwilling DA was persuaded that “it was his bounden duty by his brother and his family and the peasants of Ruhuna to follow in his revered brother’s footsteps.” Later, DM’s sons entered politics. In the 1960 Parliament, all three electorates of the Hambantota District were represented by Rajapaksas, DA (Beliatta), Lakshman (Tissamaharama) and George (Mulkirigala).

Sam related that soon after DA became a member of the State Council, DA had told him that his wife was expecting their second child. It was my father who suggested that DA name him Mahendra, the idea taken from Emperor Ashoka’s life in Nehru’s book “Discovery of India”, which my father happened to be reading. Whenever anyone referred to “Mahinda”, my father would say firmly “His name is Mahendra, not Mahinda. I am the one who gave him that name”. DA had a family of nine children, five sons and four daughters. Four sons are active in politics today.

Sam described the momentous event in 1951 when a disillusioned S.W.R.D. Bandaranaike took the extreme step to cross over the floor of the House to the Opposition, hoping to carve out a new era for the country. He said the only other Government MP to boldly risk the decision and follow SWRD was DA . “DA was not by any means an affluent person, but a loner, working honorably with dedication to his people. He had to bring up a large young family. He was abandoning a prospective position in politics ….. However, he sincerely felt that the best hope for the rural masses lay in his bold decision.”

Sam referred to” George Rajapaksa make one of the finest speeches in the annals of the Legislature of this country …” He quoted George as having said of DM ” The people of Ruhuna sent him to the State Council, and until his death, he fought relentlessly against the feudal overlords who were lording it over the backwoods from which I come. On his death the only inheritance he left me was the heritage of a name and this little brown shawl that I wear round me of Kurakkan colour, which symbolizes the struggle of the peasants in Ruhuna…” and further “He reminded members of the House of all their many duties and obligations, but that their fundamental and highest obligation was to the people of this country“ 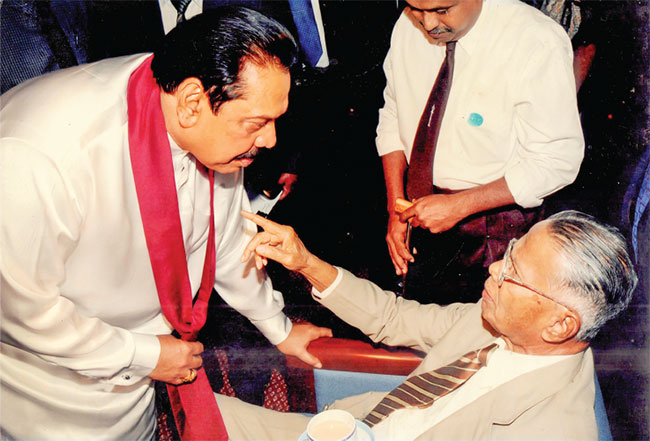 My father ended his oration by stating ” DA was a public figure and many have remarked on his integrity, courage and perseverance with which he carried out his duties. But to those around him, he was a kind man and a good man, in a sense in which very few are called kind and good.” and ” He abused no one personally nor from a political platform, in parliament or in his personal relationships”.

This was how my father and others described the Rajapaksas then. They were decent people, with no pretensions to wealth, position, power or greatness. They understood the hardships faced by the rural masses whom they represented and strived to serve them. Such was the symbolism of their kurakkan shawls. As he did for many others, my father helped DA’s family with their legal, financial and land matters, their education and employment opportunities. Were his efforts in vain to better their ability to serve the people? I think not, in the early years.

After finishing his schooling in the mid-sixties, Mahinda worked as a Library Assistant at the Vidyodaya Pirivena. Concerned about workers’ rights, Mahinda joined trade union activities and was Secretary of the Ceylon Mercantile Union. After his father died in 1967, he entered politics in 1968 as SLFP organiser for Beliatta. Mahinda was very much a man of the people. He moved with the rural masses and understood their burning concerns for betterment. In 1970, he won his seat with a large majority, the youngest member of Parliament at the age of 24 years. Although he lost his seat in the landslide 1977 UNP victory, he continued engaging in politics and supporting the voiceless.

Regaining his seat in 1989, he continued to champion human rights, demanding justice for those who “disappeared” during the JVP insurrection, along with Dr. Manorani Saravanamuttu of the Mothers’ Front, whose son, Richard de Zoysa, was murdered by UNP government forces. He was active in Geneva and at home, requesting the United Nations to look into what had happened. When his party came back to power in 1994, as Minister of Labour, he continued to lobby for workers’ rights. That was the Mahinda Rajapaksa I first knew of – a man who understood the problems of the rural majority and workers in Sri Lanka, and fought for their betterment.

Always personable, with no pretensions, he was well liked. At St. Thomas’ College, Mt. Lavinia, his three sons were known to be well-mannered boys, talented on the rugby field. I am told that, as Prime Minister, Mahinda, with his wife Shiranthi, would come to watch their sons perform on the rugby field with no pomp or ceremony. I did not know the other three brothers, only that Chamal started his working life as a Police Sub-Inspector before entering politics, and that Gotabaya, a respected, disciplined army officer, retired from the army and went to the USA.

So what happened during the last 15 years, to the Rajapaksas who represented the rural masses of Sri Lanka?

Today, at astronomical cost, the Rajapaksas have given their base, Hambantota, – a colossal District Secretariat for its relatively small population, an unused International Conference Centre, a cricket stadium mostly idle, six-lane highways with no traffic, a white elephant International Airport and an International Seaport now given to the Chinese in lieu of debt repayments. Is this progress towards sustainable development for the people of Ruhuna?

The country faces multiple crises – inability to pay its foreign debts and essential import bills, most people unable to earn or feed their families, a pandemic still not brought under control, and an imminent food shortage following an impulsive ban on fertilizer – to name a few.

So, who or what do today’s Rajapaksas represent? Is it

able, educated urban professionals and skilled workers, leaving the country in despair, or

decimated rainforests, mangroves, wetlands, beaches and depleting wildlife suffering from rampant destruction by those with no understanding of our incredible, but fragile, biodiversity, or

rich businessmen with extravagant lifestyles of fast cars and fast living, aping the West, or self-serving advisors who have isolated the Rajapaksas from ground reality, or

the extended Rajapaksa family itself, captive in its self-inflicted gilded cage?

I pen these words wondering if they will strike a chord with any of DAs sons, Chamal, Mahinda, Gotabaya or Basil, to acknowledge their limitations and seek sound professional advice to move our country on a path to sustainable development.

NOTE: All quotes in italics were taken from the D.A. Rajapaksa Memorial Oration of 2005 delivered by Mr. Sam Wijesinha published in the Sunday Observer of 25 December 2005.

(The author retired and as Assistant Governor from the Central Bank of Sri Lanka (CBSL) in 2007. As Director of Statistics, CBSL, she spearheaded the compilation of Provincial GDP data and the collection of survey data on living conditions in all 9 provinces after a lapse of 20 years since 1983. From November 2015 to December 2020, she was a member of the 3-member Delimitation Commission, one of 9 Independent Commissions appointed by the President under the 19th Amendment to the Constitution)