Its 2020-21 workload report for men’s football shows top professionals are now playing more than two-thirds of their minutes in a season in the ‘critical zone’ – appearances of at least 45 minutes in matches less than five days apart.

Cumulative exposure to such back-to-back action can lead to greater risk of injury and affect the length of a player’s career, FIFPRO said.

The union has proposed a player should miss a game after as few as three matches in the critical zone.

For a Premier League player, this could mean a reduction of between two and eight matches per season across club and national team duty.

For players at national team level at the pinnacle of the game, 67 per cent of their minutes in the 2020-21 season were played in the critical zone, up from 61 per cent in the previous two seasons.

It highlights the case of Manchester United and Portugal playmaker Bruno Fernandes. Between November 2020 and April 2021 his share of minutes in the critical zone did not drop below 68 per cent and was close to 100 per cent on multiple occasions.

FIFPRO general secretary Jonas Baer-Hoffmann said: “The data shows we must release pressure on players at the top end of the game and this report provides new research why we need regulation and enforcement mechanisms to protect players.

“These are the type of solutions that must be at the top of the agenda whenever we discuss the development of the match calendar. It’s time to make player health and performance a priority.”

Baer-Hoffmann said such safeguards need not lead to star players missing big matches, if sufficient forward planning was carried out.

He added: “It is far less problematic to do it this way than to wait for the muscle tear to come, and then the player is out six weeks and nobody sees them, which ultimately harms the competitions and the fan experience more.”

He said he was “not convinced” by the argument that such safeguards would lead to a greater stockpiling of talent by the clubs with the greatest financial resources, and said a squad of 25 with rotation would probably be sufficient to protect players from burnout.

The report also highlighted the travel demands on top players, in particular those created by international duty.

Baer-Hoffmann said he could see an “upside” in the FIFA proposal to reduce the number of international windows from five to one or two in a new calendar, which would reduce travelling. FIFA also proposes to cut the number of national team qualifying matches.

“Quite a bit of thought still needs to go into it, but could that carry positive benefits? Yes. I think there is upside in this for many stakeholders,” he said.

“I see also an upside for (club and national team) coaches who would have a longer consistent period to work with their team. So yes, there is merit to discuss that, but it would still require a bit of tweaking and consideration of the many impacts it could have.” 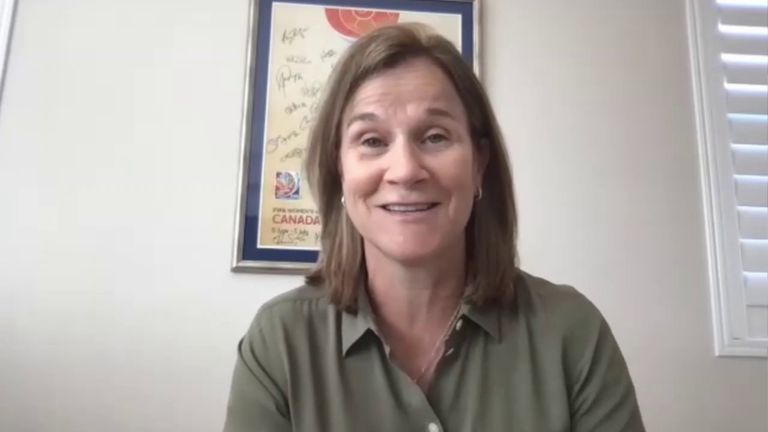 He also gave a cautious welcome to FIFA’s plan to mandate a 25-day rest period in order for players to recuperate after summer tournaments.

“The change of the conversation, the public discourse and how players are talking about it themselves, and how coaches are starting to talk about this, for the last few years, that’s where these things come from,” he said.

“Is this positive progress that FIFA is making this kind of proposal? Of course. I would tweak the 25 and make it maybe a tad longer.

“But in principle, of course, having such a period enshrined in the calendar or international regulations is incredibly important because what we see today, especially I would say with young players and players changing clubs, is that the pressure for them to return immediately when training camp starts is enormous.”

In its report, FIFPRO reiterated its call for a mandatory 28-day off-season break and a 14-day mid-season break.

European football’s governing body UEFA and the European Club Association have criticised FIFA’s international calendar plans, which include biennial World Cups and a major international tournament every summer. The risk to player health has been one of the reasons cited.

The same organisations have themselves been criticised – by the European Leagues group among others – over their support for an expanded Champions League from 2024-25 which would involve an extra 100 matches.

“What I think is quite interesting…is that our arguments (on player welfare) are always brought to the table by the other stakeholders when somebody else makes a proposal,” added Baer-Hoffmann.

UEFA president Aleksander Ceferin has criticised FIFA proposals to hold the World Cup every two years rather than four, saying doing that will dilute the tournament’s impact

“So when you need more Champions League games, then all of a sudden ‘the players are playing too much’, say the leagues.

“If you want a second World Cup, ‘the players are playing too much’ says UEFA. Now at some point if you hold them accountable to this line of argument then you’re going to have to force them to hold it against themselves too.”

Baer-Hoffmann has been unimpressed by the level of debate around the new calendar so far, describing it as “very poor”.

“If football continues to get away with dealing with it the way that it has so far, then yes, probably the commercial argument would continue to trump the reason that we think is behind what we’re suggesting,” he said.

“I’m reasonably optimistic though that for the first time that’s not possible, because this calendar is running out.

“As of 2024 people will need a new calendar, and with how the stakeholder landscape has shaped up I think unilateral impositions which favour the club game or favour the international game or favour Europe over the other confederations are getting harder and harder to justify.

“We also have a change in terms of the fans having a much more informed opinion about a lot of these questions, which will also trigger different public discourse, so that’s where I draw my optimism for these negotiations.”