Team news ahead of the World Cup Qualifier between Faroe Islands and Scotland on Tuesday; kick-off 7.45pm.

Che Adams has been ruled out of Scotland‘s World Cup Qualifier against the Faroe Islands.

The Scottish Football Association confirmed the Southampton striker had withdrawn from the squad after he went off with a leg injury during the second half of Scotland’s 3-2 victory over Israel on Saturday.

Ryan Christie took his place while Steve Clarke also has Hibernian striker Kevin Nisbet to call on for Tuesday’s away game.

Nisbet made his Scotland debut in the 4-0 victory over the Faroes at Hampden in March, coming on midway through the second half.

The 24-year-old has scored one goal in eight Scotland appearances, all but one of which have come off the bench. Steve Clarke was happy to see his Scotland players feel the love from the Tartan Army after Saturday’s last-gasp 3-2 win over Israel before calling on his side to carry that momentum into Tuesday’s trip to the Faroe Islands.

“It was important the other night for the public and the players to have that little moment after the game. It was a group of players who qualified for that major tournament after 23 years and they did that in an empty stadium and there has never really been the chance to have that interaction between the players and the supporters.

“That was the nice thing at the end of the game that we could do that. Obviously, we scored a goal after 93 minutes and everybody has that euphoria. But there was still 50,000 in the stadium, they all waited, they believed in the team, they believed we could nick it 3-2 which we did. It was a nice moment.

“These players have worked hard to do what they have done for their country, I keep saying they want to do well, and you see that. It was a good moment but one we have to park now and get ready for the next tough challenge.” Scotland head coach Steve Clarke says his side ‘must back up’ their dramatic 3-2 World Cup qualifier home win over Israel with victory against the Faroe Islands on Tuesday night, live on Sky Sports.

Faroe Islands vs Scotland is live on Sky Sports Main Event from 7pm, kick-off 7.45pm. Sky Sports customers can watch in-game clips in the live match blog on the Sky Sports website and app. Highlights will also be published on the Sky Sports digital platforms shortly after the final whistle. 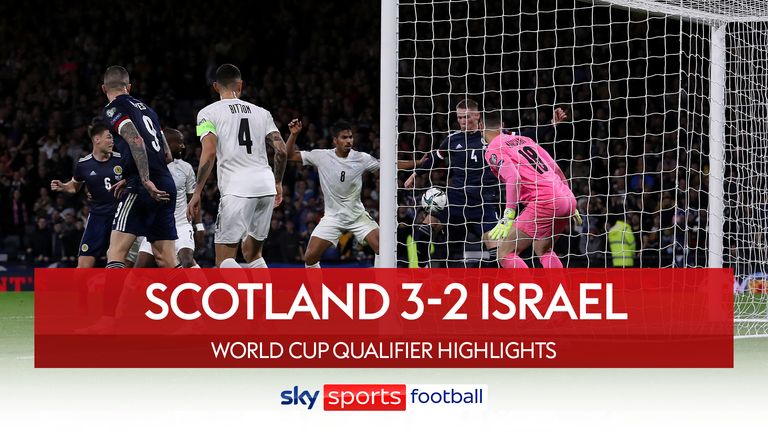 Highlights of the World Cup qualifier between Scotland and Israel from Hampden Park.