President Gotabaya Rajapaksa’s participation at the 72nd Army Day Anniversary celebrations at the Saliyapura Gajaba Regiment’s Regimental HQ in Anuradhapura on Sunday (10) was a landmark event for two reasons, the Army has said. It was the first time a Head of the State visited the military facility, and the dignitary happened to be a former combat officer of the regiment itself.

The Army said in a media statement: “His visit was historic; he is the first President to join an Army Day and receive honours at Saliyapura, the first visit to the GR Headquarters after taking the mantle of Presidency in November 2019 and the first President to be accompanied to the location by the then Adjutant, now the incumbent Army Chief, groomed by the same prestigious GR itself when HE the President was commanding the 1 GR. His succession to the Presidency also joins history since he is the first Commanding Officer of the 1 GR to have reached these impressive heights.

“Gotabaya Rajapaksa served as the Second-in-Command of the 1st Battalion of the GR immediately after the formation of the GR on 14 October 1983 by Lieutenant Colonel Vijaya Wimalaratne with the amalgamation of the Rajarata Rifles. The young Officer upon receipt of his commissions on 26 May 1972 was posted to the Sri Lanka Signal Corps, and subsequently to the Sri Lanka Sinha Regiment as an infantryman at that time, and proved his mettle after joining the GR as a pioneer member of the Keterian family. 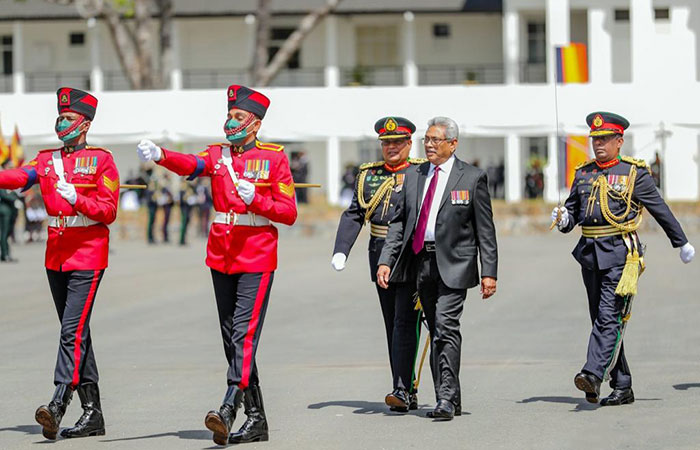 In his first military mission, the enthusiastic and budding GR officer energetically and voluntarily pursued fleeing terrorists along with GR members of his battalion and destroyed them following the attack on the Mahavilachchiya Police Station in 1985, demonstrating bravery and determination. Similarly, it was he who commanded the men when the Muttur military base came under siege by the terrorists. He and his men marched through dense jungles covering more than 35 km to reach the besieged military base and saved the camp with the help of others.

In another offensive, the ‘Operation Liberation’ in 1987 to liberate Vadamarachchi, he played a leading role in neutralizing the enemy. Again in 1990, he was fortunate to be under the command of the reputed military veteran, Major General Denzil Kobbekaduwa, who launched ‘Thrivida Balaya’ to rescue troops trapped inside the Jaffna Fort. No doubt, his commitment to the cause earned him military decorations such as ‘Rana Wickrama Padakkama’ and ‘Rana Sura Padakkama’ three times and his acts of bravery in the face of the enemy were lauded by his superiors.

In view of his career prospects, Lt. Colonel Gotabaya Rajapaksa was afterwards appointed to the office of Deputy Commandant at the then Sir John Kotelawala Defence Academy, a post he held until his early retirement from the Army in 1992.