Wayne Rooney believes Harry Kane can bounce back from his poor spell of form at the start of this season and thinks the Tottenham striker will be the player closest to breaking Alan Shearer’s Premier League goalscoring record.

After winning the Premier League Golden Boot last term and helping England to the Euro 2020 final with four goals during the tournament, Kane has begun the 2021/22 campaign for Tottenham in lacklustre fashion, failing to score in six top-flight games.

Despite netting a hat-trick against Slovenian side NS Mura in the Europa Conference league and scoring against Wolves in the third round of the Carabao Cup last month, many have attributed the forward’s dip in performance levels to fatigue and the fact that his summer move to Manchester City did not materialise.

Rooney said: “I personally think it [criticism of Kane] is an overreaction if I’m being honest.

“It’s the first game for a while that he hasn’t scored for England and for Tottenham he’s still scored a few goals this season although not in the Premier League.

“He’s one of the best strikers in the world and when you don’t score people have their opinions, which they are entitled to of course, but Harry is a good enough player and a big enough person to come through this period.

“It’s a little bit of a sticky period for him which he probably hasn’t had to deal with [previously]. All strikers deal with it and Tottenham aren’t in the best vein of form themselves so that’s down to the team.” 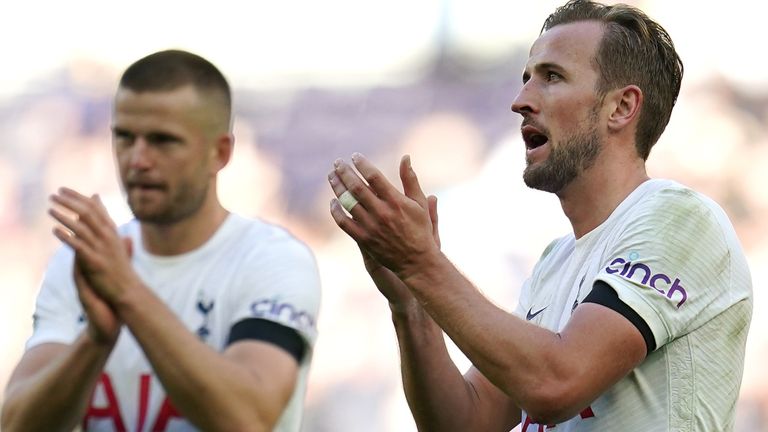 Kane appeared out of sorts while on England duty against Hungary at Wembley on Tuesday and was replaced by Roma’s Tammy Abraham with 14 minutes to go.

It was the first European Championship or World Cup Qualifier in which the England captain had failed to score since September 2017, a run of 15 consecutive goalscoring games.

Rooney, England’s all-time leading scorer, has 12 goals more than Kane for his country and the former Everton and Manchester United forward is second behind Alan Shearer (260 goals) in the Premier League scoring chart with 208, five places in front of Kane (166).

He believes scoring for the first time in the top flight this season will help Kane recapture the form which has seen him described as one of the best strikers in world football over the past few years for club and country.

The Derby boss added: “I think the minute Harry gets his first goal in the Premier League then he’ll get back to scoring on a regular basis.

“I think as a striker you’re expected to score goals but I think Harry has changed his game quite a bit in the last couple of years and he is coming a bit deeper.

“He’s created quite a few goals over the last couple of years as well but ultimately people will look [when you’re not scoring].

“I don’t think there’s any issue with Kane, he’s a top striker. He’s probably going to be the one to get closest to Alan Shearer’s record in the Premier League.

“He’s going through a sticky patch but there’s no doubt in my mind that he will get through it.”