Chris Eubank Jr says Liam Williams is “the frontrunner” to be his next opponent and told his rival “we need to set the record straight” on their simmering grudge.

Eubank Jr forced Wanik Awdijan to retire on his stool after five rounds on Saturday, insisting that his opponent’s ribs were broken by body punches, and is now targeting a major fight in December.

He said about Williams: “He has been very vocal on social media talking a lot of trash and we need to set the record straight.

“That is of interest.

“There are other names domestically and internationally too.

“It will definitely be a big fight or a world title fight in December.

“He is the frontrunner but nothing has been confirmed.

“It is a great fight, a lot of fans have been calling for it.

“I would be happy to settle our differences once and for all.

“There has been contact over the past year on social media. He has a lot to say, he has been very disrespectful, and he needs to be brought down a peg or two.”

Welshman Williams has regularly taunted Eubank Jr and tried to coax him into a fight – an all-British battle could propel one man into the world title equation. 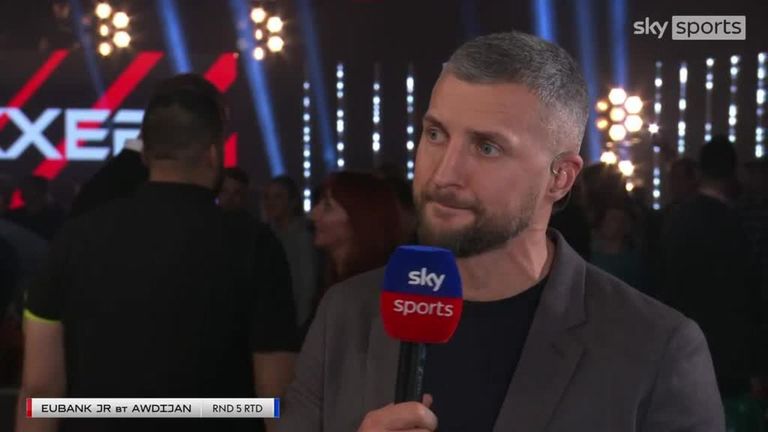 Eubank Jr said about his future ambition: “Within the next 12 months I will be world champion at middleweight. No doubt about it. That is the route that we are on.

“I have always wanted to get in the ring with Gennadiy Golovkin. Triple G is one of the biggest names in the sport.

“We were supposed to fight years ago but it fell through due to contract issues – I’ve always regretted that.

“I am WBA interim champion and he will fight for the full belt soon. So I will be No 1 contender if he wins.

“I know that I have that guy’s number. The style I have? He’s never gone against anything like that.

“Guys are so worried about his power that they just try to survive. But I spar heavyweights and don’t get knocked out so I’m not worried about a middleweight’s power.

“I will go in there and fight fire with fire, and I will take him out.”