England are expected to be ordered to play at least one home game behind closed doors when UEFA’s disciplinary body meets on Monday to look into crowd trouble inside and outside Wembley Stadium at this summer’s Euro 2020 final.

There were serious disturbances when England played Italy on Sunday, July 11 as ticketless fans fought with stewards and police officers and forced their way into the stadium.

UEFA’s disciplinary investigators have been looking at the behaviour of England fans amid what appeared to be an ineffective security operation around Wembley for England’s first appearance in a major final since 1966.

As well as the disciplinary investigation into events involving supporters inside and around the stadium, the FA is facing another four charges relating to the behaviour of fans. The charges are disturbances during the national anthems, invasion of the pitch, throwing of objects and the lighting of a firework.

The FA has requested a personal hearing on Monday but the governing body’s representatives will not have to travel to UEFA’s headquarters in Switzerland because the proceedings are being held remotely by video conference.

UEFA has been investigating the behaviour of fans inside and outside Wembley and not the FA’s staging of the showpiece final. Under UEFA’s rules, the FA is ultimately responsible for the behaviour of England supporters.

A decision is expected in the case on Monday evening or by Tuesday.

UEFA’s Control, Ethics and Disciplinary Body has 16 members and is chaired by Austrian judge Thomas Partl. Other members include PFA deputy chief executive Bobby Barnes and SPFL chief executive Neil Doncaster. As a rule, the Disciplinary Body reaches decisions in the presence of all its members, but it can also hold tribunals as long as there are at least three members present. The FA strongly condemned the ticketless fans who stormed into Wembley as ‘an embarrassment to the England team’, as Bryan Swanson reports

The ugly scenes at July’s final have raised serious questions about the FA’s ability to host the World Cup in 2030 which it is considering bidding for with Ireland.

Although the final was supposed to be a day of national celebration for England, problems around Wembley became apparent at least five hours before kick-off.

There is usually a ring of steel around major UEFA and FIFA finals which means only fans with tickets can get near the ground. Wembley is now surrounded by so many residential buildings, restaurants, bars and shops that barriers were set up only a few metres away from the turnstiles. All approaches to the stadium were packed with fans, many fuelled by alcohol, hours before the 8pm kick-off. 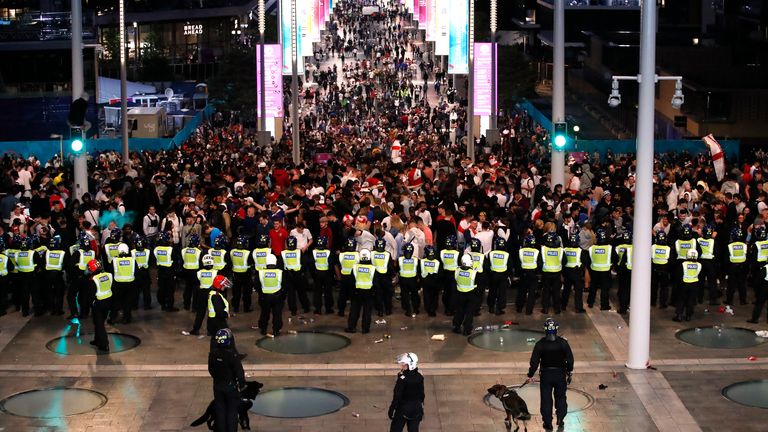 Julian Knight MP says that England’s joint World Cup bid with Ireland is ‘dead in the water’, after security breaches at Wembley

Wembley’s capacity for the final had been reduced from 90,000 to 60,000 because of Covid restrictions and many ticketless fans were aware there would be 30,000 empty seats in the ground.

Olympic Way was packed by 3pm and two hours later fans were finding it difficult to reach the stadium because of the sheer volume of people and the sea of rubbish, cans and broken glass. Fans reported seeing people taking drugs and urinating openly as they tried to make their way to the stadium.

By 5.45pm, the security and Covid test check cordons around the stadium had been breached as stewards and police officers were outnumbered by ticketless fans who were intent on getting into the game.

Wembley was locked down just after 6pm and police horses were brought in to try and restore order. Many fans who had tickets felt scared and intimidated when they made it into the ground only to find their seats had been taken by people without tickets who were refusing to move.

Minutes after the game had kicked off and Luke Shaw had given England an early lead a Wembley stadium statement denied that any fans without tickets had got into the game. The statement said the authorities were dealing with an incident at the outer security perimeter of the stadium.

At half-time, Wembley released a new updated statement: “There was a breach of security and a small group of people got into the stadium. Anyone inside the stadium without a ticket will be instantly ejected.”

There were many more people than seats inside the ground and with gangways blocked many fans felt uncomfortable and there was a clear risk of people being crushed, especially behind the goal England were attacking in the second half.

The security operation after the game finished at 2am with the Metropolitan Police reporting they had made 49 arrests: “Frustratingly 19 of our officers were injured while they confronted volatile crowds. This is wholly unacceptable.”

The next morning the FA announced it had commissioned an independent review led by Baroness Casey of Blackstock into “the disgraceful scenes”.