Some days ago, a fellow Captain dropped in to see us at home. He was accompanied by his wife. Amidst a light conversation and pleasant chatter, they mentioned NADAGAMKARAYO.  He swore it was a great teledrama and that we should give it a go. I had never watched teledramas because I could not allocate a fixed time for sitting in front of the television. The same goes for my wife, who is ultra-busy with our own dramas in life. Somehow the following day we got a break from a tight schedule and went to YouTube and watched Episode 1 of Nadagamkarayo.

Then we watched Episode 2 and then 3 and 4 and 5.Now after two weeks we are at Episode 184 and well set on Nadagamkarayo to light-up our evenings. I called a dear friend. I know his taste. By profession he is the Head Honcho of a prominent bank.  But he’s still got grass-root vernacular taste, yes, from Spielberg masterpieces to Indika Ferdinando’s ‘Ho Gaana Pokuna’.  The bank boss has not been a tele-drama man. The next day he texted me, “Thank you for the gift my friend, the programme is great, I am hooked on Nadagamkarayo.” A few days later, he emailed me that he was on Episode 58. I called another friend, a leading corporate lawyer married to an ultra-busy surgeon. They have three young children, and the lawyer is a multi-tasker from the ‘A’ Team. She too has taken the Nadagamkarayo drug and was watching the teledrama at 8.00 in the morning, the only interval in her roller-coaster daily road map.   So, what is all this hype about Nadagamkarayo? It certainly is no quick fix for lockdown blues. It is much more. Pure Sri Lankan simple story with excellent creativity.

The cast bar none is acting at Sarasavi or Sumathi level.  Kawadiya, who has traces of Dustin Hoffman, gets the Oscar nomination, and Kukul Bada, the young domestic, deserves an honourable mention purely for his varying facial expressions. The totality created by director Sivagurunathan is amazingly watchable.  The insatiable appetite of the TV audience to watch Nadagamkarayo stems from the clever way the drama rolls on, keeping all characters alive and active. If this is watched by anyone as a ‘Daily Bread’ at 9.30 in the night, that is fine, so long as you have that half-hour free to sit in front of your TV. But like us, if you are a late starter and going through the episodes to catch up with the current stage, then you are in trouble. Watch one and then go to the next and the next and the next in an unstoppable frenzy and the wake-up call comes when you hear the clock striking midnight. That is how strong the addiction could be. I do not know who the scriptwriter is or the brilliant cinematographer who is responsible for depicting rural scenery of high pastoral quality.

There will be so many others who added their smidgen to make this a first-class entertainment to all and sundry.  They say cocaine, LSD and pure Kerala ganja are addictive?

Try Nadagamkarayo, you get bewildered from episode to episode which is hard to switch off until you watch the entire story.  Kukula Mudalali seems a veteran from either stage or screen. As bald as a doorknob and with a ‘Taras Bulba’ moustache he is the perfect all-round villain for the drama. Not only is he a thug selling moonshine but a failed Romeo with any skirt that swings in the wind. Manamalan driving his red imitation Ferrari is difficult to define from the audience point of view. He is brash and bawdy and is always the ultimate liar. That is his role, and he sure brings a different dimension to the bucolic village setting with his patch-work denims and action-filled behaviour which has the unique distinction of being pleasing and annoying at the same time. This is what we traded for Netflix and HBO. 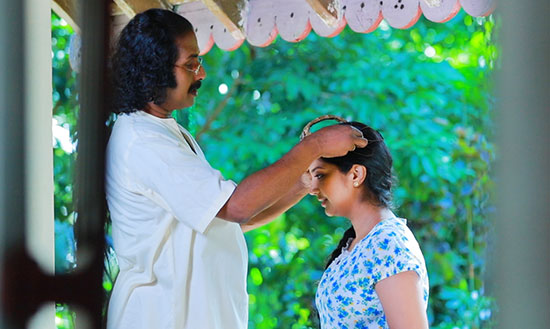 At the start it was curiosity, but in no time Nadagamkarayo became an addiction. We have not seen the evening television news for weeks. No, we missed nothing. We do not want to know who stole the garlic and created the Sudulunu scandal or who runs the rice mafia and hides the harvest. Pandora’s Box and how Uhuru Kenyatta and Vladimir Putin looked for reliable laundries to clean their money is way above what we need to know. The same goes for those who bid for a Cypriot passport at 1.3 million dollars.

We do not want to know how 600 plus items were blacklisted for importing and then in a flash a new magician came on stage like Gorgiya Pasha and swung his multi-coloured wand and Ooppss – the restrictions vanished into thin air. No more dollar-saving cutbacks. We can be clad in St Michael’s underwear and feast on Cadbury chocolates stocked in a brand new two-door refrigerator imported from Germany. No, I certainly do not need all that twisted jargon camouflaged as current head-lines to crowd my evening by watching local television channels. Maybe, it is not the fault of these stations but the politically- dominated mundane news that is available or ‘has to be’ shown by order.

I will gladly trade all that to see Loku Hamuduruwo on Nadagamkarayo screen with his serene behaviour and exemplary attitude to life which soothes our very souls. At all times the soft words of Loku Hamuduruwo are always a simple wisdom-filled lesson in life to all of us. Cap it up with the daily occurrences at the tea kiosk by the paddy field where the shop owner, manager, and tea-maker Mudalali and his golaya Gajaman colour the show.  His customers are the banana-eating and kahata-drinking clan who spice the story with palatable ‘Gamey Talk’.

The champion of this mini-stage is Sirisena the erudite goat-milk-seller who has his own interpretations and anecdotes to anything and everything political that happens in the country.Sudu Chooti comes to the story as a village Juliet. She is the daughter of the Music Master and his comely wife Kusumalatha who is ‘all perfect’ in her role as a village mother. Here the village damsel Sudu Chooti falls in love with the Kassippu-selling Sara, the scourge of the village.  No doubt, Sara carries the show wrapped in a rugged flamboyance which is nothing but raw talent. He sure is the ultimate ‘Village Hampden’ from Gray’s Elegy, a rebel against constant village tyranny. He and his Kassippu boys, Kawadiya, Suddha and Kiri Putha depict clearly to the audience the sadness of the youth of today.

The poverty that plagues their young lives with no answers visible to make a decent living is an unchangeable tragedy. They are outcasts in the village and are branded for life with no avenue for redemption.  That part of Nadagamkarayo is a lesson to us all. The underlying message is clear; It is not the core of the man that is rotting, it is the system that denies him the opportunity. Where and when is the brighter day that would give him a chance to wake up and make attempts to be a decent human being?Rasika is poor, her husband has left her and run off with another woman. Rasika is a single parent taking care of an innocent little daughter. They live in a hovel that is called home. Her father is sick, a heart patient, and the mother is unemployed.

The day that dawns for them is always a struggle.A stranger is kind to her. Gives Rasika a lift to visit her father in hospital and brings her home. She invites him for a cup of tea. He is reluctant and hesitates. Even though we are poor we can afford to give you a cup of tea,” she tells the stranger. That line says it all. It defines the soul of Sri Lanka and what is Sri Lankan.Where would we be without it?