Mikel Arteta has lauded Alexandre Lacazette’s recent impact at Arsenal but refused to confirm whether the forward will be offered a new contract amid uncertainty over his future at the Emirates Stadium.

The 30-year-old’s current deal with the Gunners expires in June next year and he is free to speak to overseas clubs in January to negotiate a move on a free transfer at the end of the season.

Lacazette came off the bench to score a dramatic injury-time equaliser against Crystal Palace on Monday, his first Premier League goal of the season, to salvage a 2-2 draw for Mikel Arteta’s side.

Ahead of Arsenal’s game with Aston Villa on Friday night, live on Sky Sports, Lacazette’s manager was eager to praise the Frenchman for his commitment to the club and his “contagious” influence on the team, but stopped short of clarifying whether he will be offered an extension to his current deal.

Arteta said of Lacazette’s contract: “It’s the situation that we have and we have to accept it.

“I cannot ask anything from the player… and it’s not an individual situation because it has a knock-on effect.

“All of this we have had to deal with in the past and still now, we have to see what the best option is for everybody at the end of the season.

FREE TO WATCH: Highlights from Arsenal’s draw with Crystal Palace in the Premier League

“I had no doubts about that [his motivation] and if I did I would probably have decided to do something different in the summer if the motivation was just his financial future.

“It’s not the case with Laca and he has shown that since I’ve been here every single day and that he remains a really important player for us.

“I think he was able to transmit that energy [against Crystal Palace] and that was contagious for the rest of the team and for the stadium.

“He created a different atmosphere straight away, with his determination and his quality and he tried to change the result straight away and [had] that belief in himself that he could do it.”

Lacazette, who is into his fifth season at Arsenal following his arrival from Lyon in 2017, is yet to start a Premier League game this season, making just three substitute appearances so far, with captain Pierre-Emerick Aubameyang often preferred as a lone striker.

When asked whether it is impossible that Lacazette will be offered a new contract, Arteta answered: “No. Anything is possible.

“He is our player, and I treat him like any other player, I’m not going to treat him differently because he has a year left or not a year left and that is what he deserves.”

Bukayo Saka is a doubt for the clash with Dean Smith’s Villa after being forced off with an injury after a challenge from James McArthur against Palace.

Arteta explained: “He hasn’t trained yet so we have to assess him today and see how he is.

“It’s down to him and the doctors to see how he is feeling between today and tomorrow.”

Arsenal head into their clash with Villa unbeaten in six games in all competitions and on the back of two draws following their enthralling north London derby triumph over Tottenham.

Recent results constitute an upturn in form for the Gunners after three defeats to Brentford, Chelsea, and Manchester City at the start of the season.

Smith’s team meanwhile will be looking to bounce back from their disappointing 3-2 defeat to Wolves as Bruno Lage’s side came back from 2-0 down to overcome their local rivals at Villa Park.

Arsenal have lost their last three against Villa in the Premier League, including last season’s encounter at the Emirates when a Saka own goal and an Ollie Watkins double secured all three points for the away side.

Arteta said of Friday’s opponents: “It is a test and they have shown how difficult they have been against us because we haven’t got the results that we’ve wanted recently against them.

“We know they have improved their squad, the way they are playing in the last few seasons they are showing a lot of ambition with the way they are recruiting as well and it will be a difficult game for sure.

“I really like him [Dean Smith] everything that I’ve heard from him is really, really positive.

“He’s building a team and a club with different ambitions. Credit to him and the owners that they are giving him the time and he’s done a really good job.” 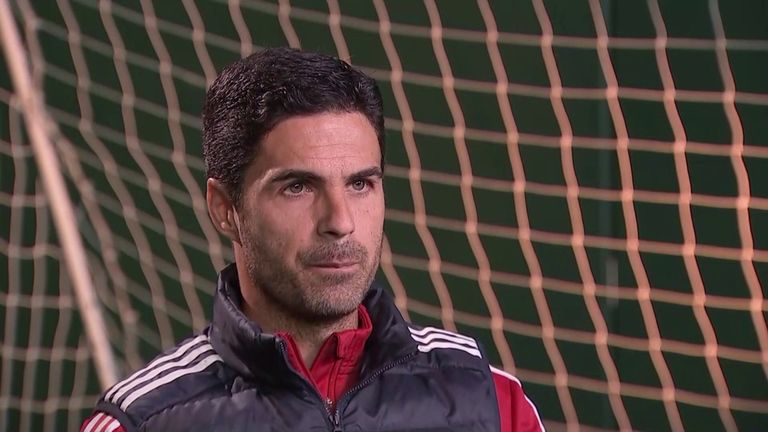 Arsenal manager Mikel Arteta has warned that some football coaches are being put off from entering management because of the abuse they receive from fans and on social media.

‘I was shocked by Bruce’s revelation’

Bruce guided the Magpies to 13th and 12th-placed finishes in the Premier League in his two seasons there but revealed he is unlikely to pursue future opportunities in management partly to avoid exposing his family to any more strain.

Arteta, who has previously spoken about online threats to him and his family during his time as Arsenal manager, has stressed the need to educate people about the impact the abuse can have and feels worried that the treatment of such a respected coach as Bruce will only fuel further vitriol towards head coaches.

Speaking to Sky Sports News, Arteta said: “I was shocked with the way he expressed himself and the letter he did openly.

“He’s one of the most important managers England has had in the last 100 years I would say. It’s something to reflect [on] and think about.

“It [online abuse] will only get worse and it’s not going to get any better unless we do something about it.

“I have experienced it myself. I have three kids, they are watching football and they support certain teams as well.

My worry is that my career is very, very short and Steve has been doing it for over 20 years with a thousand games, and he has struggled. When someone with that experience is struggling, there is not an easy fix to that.

“And they see reactions from fans towards a player or manager telling them “they are so bad”, “the manager doesn’t have a clue”, and our obligation as parents is to stop that immediately.

“My kids in a year or two they are going to have a mobile phone and if I allow them to have that kind of reaction and use that language, they will do it on social media.

“They don’t have a clue whether that manager is making the right decision, whether that player is good or not, they cannot make a judgement based on one moment or instance.

“First of all, you have to say to them: You have hate, who are you trying to influence with those comments? It’s not right.

“Criticism can be really powerful if it’s done in the right way. When people want to damage you, you want to have a reaction to go against it. You need to know when and how.

“My worry is that my career is very, very short and Steve has been doing it for over 20 years with a thousand games, and he has struggled.

“When someone with that experience is struggling, there is not an easy fix to that.”

When asked whether abuse might deter managers from continuing with their jobs or even entering careers in coaching, Arteta said: “I think it has already started in society as well that it is easy to take the comfort zone, and the comfort zone is deciding to be a sports scientist or an individual coach.

“Hopefully not and this is what we cannot lose because, with a lot of people with great talent and great capabilities, this [online abuse] cannot be the filter for someone to make the decision on whether they need to be there or not.”