A stirring Old Trafford night to remember or Cristiano Ronaldo papering over the cracks? Maybe it was both. Manchester United’s second-half comeback against Atalanta was important. It lifted them from the bottom of Group F to the top. But this 3-2 victory did not even come close to answering the questions about Ole Gunnar Solskjaer and his side.

Instead, it was a reminder of everything that we already knew. They can look disjointed and disorganised, too easy to play against. They are vulnerable and can be exposed defensively. And they have world-class players who can cancel out those flaws in an instant.

Bruno Fernandes’ extraordinary vision sparked the comeback with his pass to Marcus Rashford for United’s first. Ronaldo completed the turnaround with the sort of header that he makes look simple but nobody else in world football seems able to score.

Cheered off at the end, it might prove the catalyst for a more confident showing against Liverpool. But it might not. United have had their moments already this season. This was not even Ronaldo’s first late winner in the Champions League since making his return.

If there is to be any conviction that this marks a more significant shift in fortunes and form, a more controlled performance was required, one that might persuade people that the next two visitors to Old Trafford – Liverpool and Manchester City – can be kept at arm’s length.

This was not that performance. Solskjaer described his team setup as 4-2-4 before kick-off and that is how it played out. His thoughts on a first half that saw Atalanta lead by two at the break? “I thought we played well.” A stirring night. But the cracks remain.
Adam Bate

There were barely 24 hours between Thomas Tuchel blaming mental and physical fatigue for Romelu Lukaku’s lack of goals in recent weeks and then naming Chelsea’s record signing on his team sheet to face Champions League minnows Malmo. Sadly, that would not be the most ironic aspect of the situation.

Tuchel had wanted to bounce his main man into form, find him a goal – or two – against a willing target in an opposition who had conceded seven goals in their opening two Champions League games. But as Lukaku hobbled down the tunnel 23 minutes into that game, it became evident his wait to return to scoring form would be halted for a while longer.

“If I knew before I wouldn’t have done it. But you can’t know it before and it was necessary that he was on the pitch,” said a defiant Tuchel when asked about the seemingly contradictory actions of the previous day and a half.

Tuchel pointed to the fact Lukaku’s injury was caused by Lasse Nielsen’s horror challenge rather than the muscle issues he had alluded to, but the risk of playing him at all still came with its own worries.

If he did play Lukaku, then why Werner too? Since Olivier Giroud and Tammy Abraham were both sold with Tuchel’s blessing in the summer, the German is the only other out-and-out striker left at Stamford Bridge, even if Kai Havertz is more than capable of filling in when required.

Havertz will need to do just that for the foreseeable future after Werner too hobbled off the pitch holding his hamstring, exactly the issue Tuchel had suggested had concerned him about Lukaku.

He has started only four of Chelsea’s eight Premier League games to this point but will likely get his chance to shine after his fine goal against Malmo, coupled with the lack of other options at Stamford Bridge, and it may provide an opportunity for Callum Hudson-Odoi too, after his promising link-up with his makeshift strike partner in that game.

The big bonus for Tuchel and Chelsea is that their next five opponents before November’s international break are Norwich, Southampton, Newcastle, Malmo and Burnley. Otherwise, the manager’s risky decision could have had more serious consequences in what appears the most competitive Premier League title race in years.
Ron Walker

For years Pep Guardiola has pleaded for patience with Phil Foden. The Man City boss has gently exposed the forward to first team action, sometimes seemingly holding him back in order to protect and develop him. But it’s all paying off now.

Foden is flying. He’s in the best form of his career and he’s now central to this City side. While that doesn’t always mean central in terms of position, as we saw at Anfield, it did on Tuesday night away to Club Brugge – and it was from the middle third of the pitch he pulled the Belgian side apart. 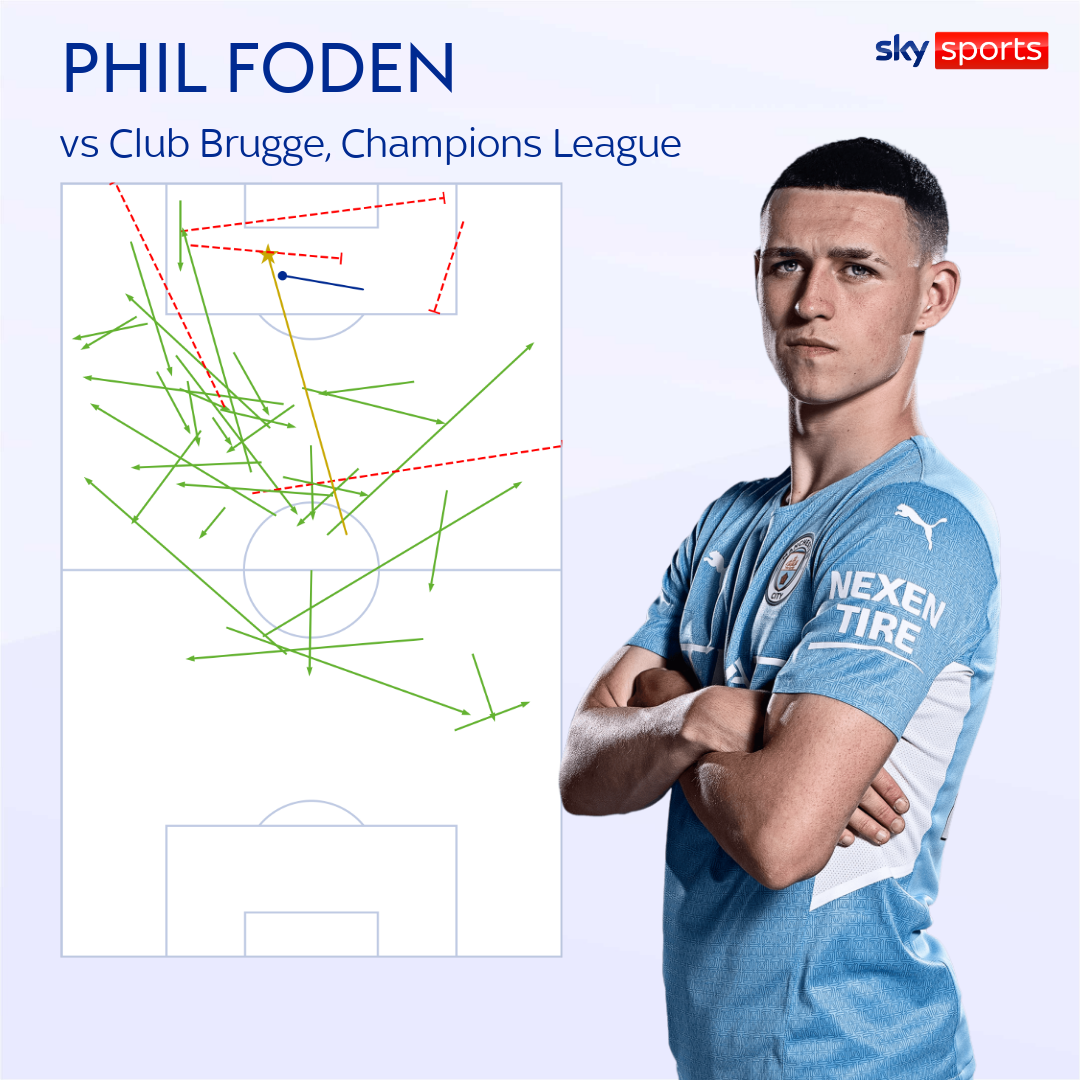 There had been a series of excellent passes from the 21-year-old early in the game but it was on the half-hour mark that his inch-perfect loft over the top released Joao Cancelo to score the opener.

That pass came after Foden had dropped into a deep position, effectively the central midfield zone that Gareth Southgate had experimented with him in during the last international break. But it was as a false nine that Foden starred for the majority of this big City win.

He was the link man for his side, receiving the ball from City’s centre-backs and Rodri before combining with Jack Grealish and Kevin De Bruyne to move his side up the pitch. In particular, his work with Grealish – supported by forward runs from Bernardo Silva and Cancelo – caused Brugge all sorts of problems on the left flank.

The only disappointment was there was no goal of his own. It wasn’t for a lack of trying; Foden had four shots in the match. But with him pulling the strings, there was the opportunity for others to capitalise in the box and City had 22 shots in total.

Another standout story from the game was the arrival of Cole Palmer on the big stage, with the 19-year-old scoring his first Champions League goal.

Like Foden, Guardiola has resisted sending Palmer out on loan, instead preferring to familiarise the forward with his future first-team colleagues. The hope will be it is as productive an approach with Palmer as it has been for Foden.
Peter Smith

Liverpool’s win over Atletico Madrid served up brilliant chaos. From the early goals to the quick comeback, from Antoine Griezmann’s red card to penalty drama in both boxes late on. But amid the wild action inside an electric Wanda Metropolitano, some cool-headed planning from Jurgen Klopp and his coaching staff played a key role.

The Reds had blocked some of their players going on international duty earlier this season, with quarantine restrictions meaning they would have then been unavailable for the Premier League fixture with Leeds. However, with that not an option during the September international break, Klopp instead instructed Alisson and Fabinho to return from their Brazil duties via Madrid.

The decision meant the two players missed Saturday’s breeze past Watford but were ready and waiting in the Spanish capital when their team-mates arrived for Tuesday’s Champions League clash. And both played key roles.

Alisson, in particular, was in exceptional form, making three crucial saves including an excellent one-on-one stop from Griezmann during the first half. He picked up the man of the match prize for his performance. Fabinho, who began on the bench, added an air of calm amid the storm when he came on at half-time for Naby Keita, who had struggled defensively after his wondergoal.

No player won more tackles than Fabinho and he looked after the ball too, with no Liverpool outfielder bettering his 95 per cent passing accuracy. Griezmann’s red card early in the second half helped, but he brought some control in the middle of the park for Liverpool – although, Atletico, impressively, still caused problems.

Both players are due to return to Merseyside a little later than the rest of the first team as part of the regulations for people returning from South America but they will be available for Sunday’s trip to Old Trafford, where they are likely to have important parts to play again. Rarely has a long-haul flight stopover been so rewarding.
Peter Smith