Manchester City moved up to second in the Premier League after a first-half blitz set the tone for a 4-1 win over Brighton.

Brighton simply could not live with City’s energy and quick passing in midfield and Foden made it 3-0 just three minutes later when deflecting Gabriel Jesus’ shot past Sanchez without knowing too much about it.

Graham Potter’s team improved immensely after the break and Alexis Mac Allister scored from the spot with 10 minutes remaining after Ederson had fouled substitute Enock Mwepu.

Yet a comeback never materialised as Riyad Mahrez wrapped up the points in stoppage time with City stretching their unbeaten Premier League run to eight games.

Man of the match: Phil Foden

How City turned on the style in Brighton…

Brighton had ended Man City’s English record of 23 away games unbeaten in May when they had already won the title – but Pep Guardiola’s side were in ruthless mood back at the Amex.

Lewis Dunk rescued Brighton with an amazing goal-line clearance on 11 minutes when it looked like Jesus had clipped a perfect finish over Sanchez.

City only had to wait two minutes before taking the lead though. Sanchez made a mess of a high ball under pressure from Jesus and Silva’s hooked cross was poked home from close range from Gundogan. The goalkeeper screamed at the referee for a foul but a VAR review showed Jesus did little wrong when challenging. Gundogan has now scored in all three of his last appearances at the Amex.

The goal sparked City into top gear as they took the game away from the hosts with a polished display of devastating pressing and counter attacking. Jesus had a shot blocked away by Dunk before City hit Brighton with a quite sublime piece of football.

A Brighton attack down the left was cut short by Kyle Walker and within seconds, Silva was charging through the midfield. He spotted Grealish in behind and the England international took Sanchez out of the game with a perfect pass and a combination of Dan Burn and Foden turned the cross home.

Two became three with City’s next attack with Brighton’s midfield lacking the mobility to stem the flow of attacks.

Grealish was again the source down the left and even though his low strike was kicked away by Sanchez, Jesus was quick to the rebound. The Brazilian’s shot took a slight nick off Foden which wrongfooted Sanchez and squirmed into the net.

Brighton could have sat back and taken their medicine after the break but credit to Potter’s side, they continued to play with bravery and were ignited by the introduction of Tariq Lamptey down the right. Leandro Trossard tested Ederson with a low stinging drive that somehow stayed out on 60 minutes as the hosts pinned Guardiola’s team back, winning lots of set pieces in their bid to get back into the game.

City stood firm though, until Ederson rashly decided to slide in on Mwepu close to the by-line and Kevin Friend had little choice but to award the penalty. With Pascal Gross off the pitch, Mac Allister stepped up and beat Ederson from the spot.

It was only to be a consolation for the hosts as the damage had been done courtesy of City’s slick first-half performance.

Riyad Mahrez added further gloss to the scoreline in stoppage time after being found in huge amounts of space in the box by Foden.

Man of the match: Phil Foden

When Foden looks back on his career, he will not remember these two very scrappily finished goals – one of which he knew little about. However, his performance leading the line for City was another reminder of his frightening talent. Let’s not forget, this is a player that is still only 21-years-old. His movement playing up against Dunk and Burn left the Brighton defence seeing stars and set the platform for his team-mates to silkily move the ball around the final third at will in the first half.

Sky Sports’ co-commentator Alan Smith said: “It’s not often that I give man of the match to somebody who has had so few touches but his touches have been so brilliant. In that first half particularly, he was irrepressible. What a talent. He could easily have had a hat-trick.”

Jamie Redknapp added: “He’s an incredibly intelligent footballer. He’s so bright in his movement and his goals.

“He’ll be kicking himself he didn’t get a hat-trick. Make no mistake, he will have seen Mason Mount getting a hat-trick and thought, ‘I want a piece of that.’

“But he’s getting goals and assists. His all-round game is great.”

Brighton boss Graham Potter: “I’m so proud of the players. We are playing against a top team and they deserved to win but the players did everything we asked them to do. They were together, had spirit and quality. We are disappointed to lose but our performance was something to be proud of. The players responded and did not feel sorry for themselves and accepted the quality of the opposition. We will take a lot forward from this game.” 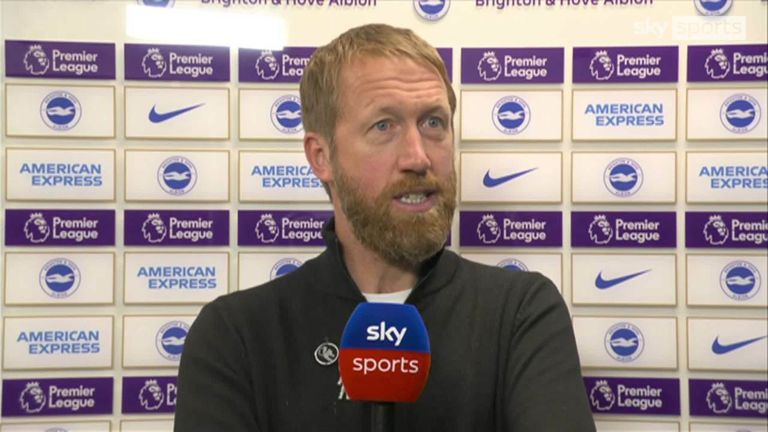 Manchester City boss Pep Guardiola said: “We win the game because we have good players, don’t estimate too much the decisions of the managers. We saw what they do, we figured out maybe we have the space because when they play man to man they have one man free just the ‘keeper. They are incredibly aggressive, when the passes are more than 5-10 metres they win it after. Most importantly when they have the ball they know exactly what to do, not just defend well and after channels. They occupy the space really good.

“They have all the mechanisms of a big team. I know it from playing against Swansea when Graham was there and last season, always they try to play, I admire for that. Not a top-four team but they play like it. That’s why they know how difficult it is and a big compliment for our team.”