MV X-Press Pearl, which sank in the western Sri Lankan coastal waters in late May, led to huge environmental destruction and losses of fishing livelihoods and incomes. The most directly affected party was the fishing community, from Kalutara to Chilaw, following the imposition of the fishing ban on May 21, 2021, which continues to date, keeping fishers away from their productive environment. An initial payment of Rs. 5,000 was paid to fishing-related stakeholder families, while a part-payment is now being made from indemnities paid for the initial claims. Yet, the human suffering is tremendous and this article attempts at highlighting some of these impacts on fishing livelihoods, which cannot be easily compensated by payments, calculated on the basis of lost incomes. “Things will have to be seen as ‘they are’, not as ‘we are’” (Anais Nin, French Writer).

A 186-metre-long container ship, called X-Press Pearl, registered in Singapore, arrived in Colombo on the night of May 19, 2021 carrying 1,486 containers. On May 20, it was reported that the ship caught fire, which was only 9.5 nautical miles (17.6 km; 10.9 miles) away, north-west of the Colombo Port. On May 25, a large explosion occurred inside the vessel, and by late afternoon containers were dropping from the vessel into the sea. The ship sank on June 2, while it was being towed to the deeper seas, after burning for 12 days. The incident was deemed the worst marine ecological disaster in Sri Lankan history. The ship’s cargo included, among others, 12,085 MT of plastics and polymers, 8,252 MT of chemicals and 3,081 MT of metals. Since the time the ship caught fire, ship debris, burnt goods and plastic pellets washed into the shore in large quantities. Dead fish, turtles, whales and dolphins were found along the western coast and plastic pellets were observed trapped in the gills of fish. While such debris was initially noticed in the Negombo coast, other areas from Kalpitiya up to Matara also reported ship debris, dead fish and turtles, indicating wider spread damage.

Impact of oceanic pollution on fisheries

With the enforcement of the fishing ban on May 21, 2021, which prevented fishers from going to the sea, especially because of the mounds of ship debris scattered in the coastal waters posing threats of damage and loss of fishing equipment on the one hand, and the uncertainty of the impact of ship’s cargo on fish, on the other, the fishing community suffered several shocks overnight. These included, loss of income, loss of supplementary income (female employment), drop in demand (drop in consumption of fish for fear of contamination), loss of assets (gear), well-being loss and loss of traditional sources of insurance (because the fishing ban affected all [collective shock] no assistance was available within the community). 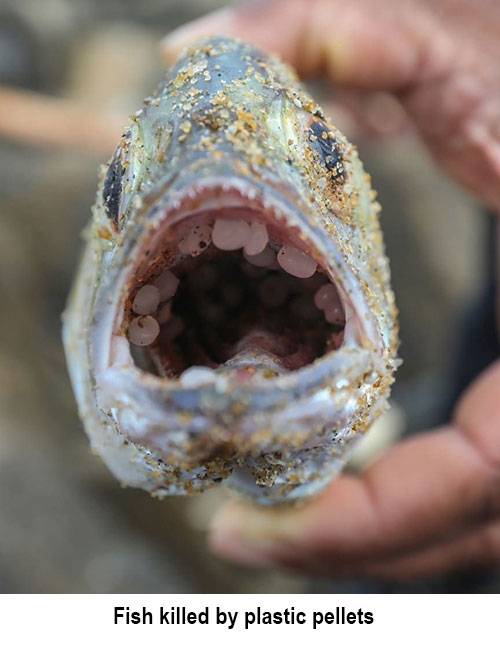 The ship disaster hit the coastal fishing community of the western coast, at a time when they were suffering from the COVID-19 pandemic. During the first wave of the pandemic, all links in the fish value chain were seriously affected, dismantling almost all of them; fish landings, marketing, distribution and processing. Due to the imposition of curfews, low demand, low prices and disruption of the marketing system, fishing was seriously affected (45 to 65 percent less than normal). The second wave of the pandemic hit the country on October 4, 2020, when COVID-19 cases were reported from a private garment factory (Brandix) at Minuwangoda in the Gampaha District. Following this cluster, emerged another COVID-19 cluster at the Peliyagoda fish market when 19 cases were reported on October 21, 2020. Many people believed that fish was a Coronavirus carrier and stopped consuming fish for fear of COVID-19 infection. Consequently, prices came down drastically. Quite alarmingly, before the affected population started to recover, the third wave of COVID-19 hit the country, which rose to prohibitive levels after the Sinhala and Tamil New Year, in late April, with deaths rising to 198 per day ( August 20, 2021). While the weak economy and stagnant incomes hit the poorer groups badly, fishing restrictions and poor demand for fish resulted in reduced fishing incomes and livelihood threats to fishers, especially the small-scale fishers who cater to the local market.

The X-Press Pearl ship disaster hit the fishing community at a time when they were confronted with the vagaries and threats of the COVID-19 pandemic.

Analysis of price behaviour, which took into account average weekly prices in May and beginning of June 2021, revealed a drop in the wholesale prices in the fourth week of May when the impact of the X-Press Pearl disaster was felt. Dead fish and other marine animals washed up on the shore, along with tons of debris, which contained, among other things, huge amounts of plastic pellets. Later, it was made known that the ship’s cargo contained certain hazardous chemicals, which caused a significant drop in fish consumption, which further reduced wholesale prices. Low demand is also a result of loss of employment and income by those self-employed groups. In respect of the retail trade, many retail outlets remained closed and normal distribution (by motorcycle traders, bicycle traders) was also disrupted. Only a few retailers were present to distribute fish. This led to increases in consumer prices of fish. At a time when wholesalers were complaining of low fish prices, consumers were complaining that the price of fish was too high. Communication with officials of the Fish Wholesalers Association at Peliyagoda fish market revealed that nearly 60 percent of the fish, such as skipjack, were sold for dry fish making, due to lack of demand for fresh fish.

The fishing ban which was imposed on May 21, 2021 posed severe livelihood threats to the affected families. Nevertheless, a payment of Rs. 5,000 was made, by the government, to affected families, which was the payment made to all those self-employed families hit by the COVID-19 pandemic. This amount was equal to 10 percent of the mean monthly expenditure of an average Sri Lankan household in 2016 (which was Rs. 54,999). Since then a payment has been channelled to fishing communities only once (recently), from monies received from the ships insurance companies (an interim payment of Rs. 720 million), of which about Rs. 400 million has been allocated to fisheries. Yet, the process has not been completed. The long payment intervals and the smaller size of the payment would have caused mammoth adversities for households striving hard to make the ends meet.

Of course the immediate response of the fishing community was to reduce consumption, tightening the belt, which often puts more weight on women fisher folk, who have been traditionally accustomed to shouldering the burden of consumption shortfalls in ensuring that men are kept physically fit to carry out fishing operations. Nevertheless, food insecurity could be only one of the immediate impacts of the ship disaster, which often leads to nutritional insecurity, which has more injurious impacts on the nutrition of children. A quite painful impact would have been the inability of affected households to pay regular bills (house rent, electricity, water and goods taken on installments). In a study carried out in 2020 by the author, it was revealed that debt repayment obligations of an average fishing household to be around Rs. 20,000 per month (Samudra Report, No. 85). Of course, such debts will accumulate if a fishing household has no other source of income, which is usually the case. Parental care too is an issue because parents usually live with children in their old age, a practice that is quite characteristic of Sri Lankan society. Expenses related to such care-giving could be excessively high. Cries of children to have a bite of sweets or a lick of ice cream would remain ‘unheard’. The whole family will be cut off from involvement in leisure activities, films, pleasure trips and social and religious obligations. All this could mean colossal psychological stress on all members of the family, which cannot be expressed in value terms. 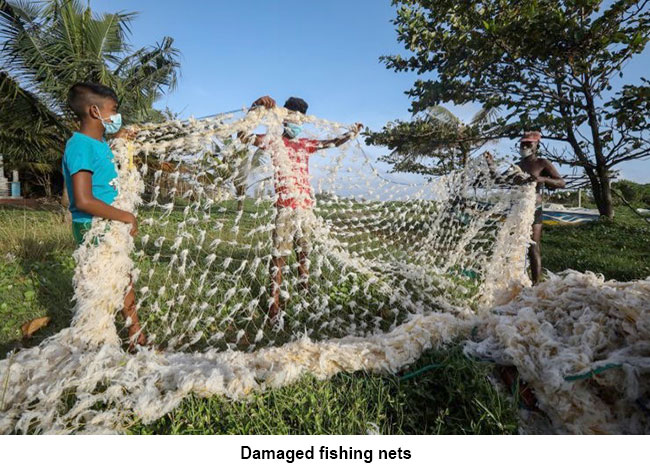 In the absence of insurance markets for fishing related risks, people resort to credit. In fishing societies, exchange of small loans is very common. Because of high catch variability, incomes of all fishers do not correlate. One who is lucky will offer part of his earnings to an unlucky one, knowing that one is not lucky or unlucky every day. However, the ship disaster hit everyone equally and the fishing community’s insurance function was lost. In such a context people tend to mortgage jewellery, sell assets or borrow from outside money lenders, who sometimes charge exorbitant rates of interest, which could be as high as 180 percent per year. Since the day the fishing ban was imposed (May 21, 2021), debt repayments (interest and principal on loans) of fishing households would have accumulated adding to the existing pressure on household chores, leading to great human suffering.

In analysing the impact of the ship disaster on the fishing community, one cannot refrain from underlining the context in which small-scale fisheries take place. Some of the most notable impacts observed recently have been the injustices caused by the process of Blue Economic Growth. Complaints of exclusion of communities from development related decision making, absence of any community consultation in implementing development projects, coastal land grabbing by tourism interests (land tenure issues) and marginalization of small scale fishers, were heard from all around the country. Conflicts among fisheries and tourism stakeholders have risen to prohibitive levels. Many fishers have lost their beach seining sites, craft anchorage sites and fish drying sites, first, as a result of climate-induced sea erosion and second, as a result of land grabbing by tourism interests. While coastal waters traditionally provided livelihoods to thousands of small-scale fishers who had customary rights to fish resources in such waters, today the ‘small fry’ has been chased away and the coastal waters have become the arena of sea sports and leisure. The public beaches have become private and some beach access roads have become private property of tourism stakeholders. These are all injustices emerging from the unregulated growth of the blue economy which have pushed the small scale fishers to the margins.

Evidently, there is tremendous suffering among diverse fishing related households. Livelihoods and incomes are lost, ill-being is quite pervasive, food insecurity and nutritional insecurity is on the rise, drops in consumption and expenditure is causing misery, households are unable to attend to parental and child care and debts have accumulated. The government has tried to redress the situation by providing the affected households with Rs. 5,000 initially and now by making an interim payment. Unfortunately, there have been huge delays in making these payments due to delays in making claims and payment of indemnities by the ship’s insurance agents. The longer the delays in payment, the higher would be the human suffering. The fishing ban will continue until the debris is cleared from the bottom of the sea by the responsible party, and thus the agony and misery will continue to grow. Two things are worthy of mention at this juncture. First, what has been paid so far has been hardly sufficient to meet the family subsistence needs. Apart from making a payment equal to lost daily wages, a premium that covers the various costs incurred by the affected parties in resorting to borrowing, in mortgaging assets and psychological stress, will have to be paid. Second, it is of paramount importance in developing strategies to improve the resilient capacity of fishers to external shocks, which would involve, among other things, strengthening community sources of insurance (fisheries cooperatives, coop savings), promoting self-insurance strategies (savings, alternative livelihoods, women employment), and addressing social injustices caused by the process of Blue Economic Growth.