Lack of genuine pace in their bowling department hurt defending champions West Indies as they suffered a heavy eight wicket defeat at the hands of South Africa in the ICC T-20 World Cup in Dubai yesterday.

The Windies may have lot of experience at their disposal possessing plenty of globetrotters who play franchise cricket but their bowling lacked penetration and a target of 144 proved to be too little to defend as South Africa won with ten deliveries to spare. 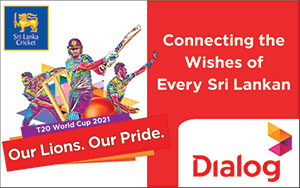 Both teams had lost their opening encounters earlier in the competition and badly needed a win and South Africa will be pleased with their effort. As for West Indies, two time World Champions, a semi-final spot seems to be slipping away from them. But you cannot completely write off the Caribbean kings, who have a remarkable record in the shortest format of the game. For that to happen, their batting needs to fire.

Batting was a flop yesterday as they managed only 143 runs and looked to be some 20 runs short.

Opening batsman Evin Lewis laid the foundation for West Indies top scoring with 56 off 35 balls with three fours and six sixes. West Indies had got off to a good start with Lewis and Lendl Simmons adding 73 runs for the first wicket.

Despite possessing some of the finest big hitters in the game, West Indies innings did not get the impetus it needed during the death overs and 143 did not look a safe score.

Anrich Nortje showed why pace matters finishing with figures of one for 14 in his four overs and was named Man of the Match.

During the run chase, South Africa captain Temba Bavuma tested Andre Russell’s arm hurrying for a quick single having pushed one to mid-on and was run out.

Reeza Hendricks and Rassie van der Dussen then added 60 runs for the second wicket to set the platform for the run chase. After Hendricks was well caught by Shimron Hetmyer in the deep, Aiden Markram joined van der Dussen and sealed the deal for South Africa.

South Africa’s number three van der Dussen looked to be playing through the innings while Markram was the aggressor finishing with 51 off 26 deliveries with two fours and four sixes while van der Dussen needed 51 deliveries for his 43.

Markram brought up his half-century by pulling Andre Russell for six and in the next ball brought up South Africa’s victory with a single to mid-wicket.