Ronald Koeman was finally put out of his misery as Barcelona manager after the club’s latest demoralising defeat on Wednesday, so what next for the Catalans and who is in line to succeed the Dutchman at Camp Nou?

Barcelona lost 1-0 at Rayo Vallecano on Wednesday evening, hot on the heels of their 2-1 home defeat to arch-rivals Real Madrid on Sunday, setbacks that have left the club languishing down in an unfamiliar ninth place in the La Liga standings.

The weekend loss to Real was Barca’s third in a row and fourth in their last six matches in all competitions after they also made a poor start to their Champions League campaign this season, leaving returning president Joan Laporta with little option but to sack Koeman. 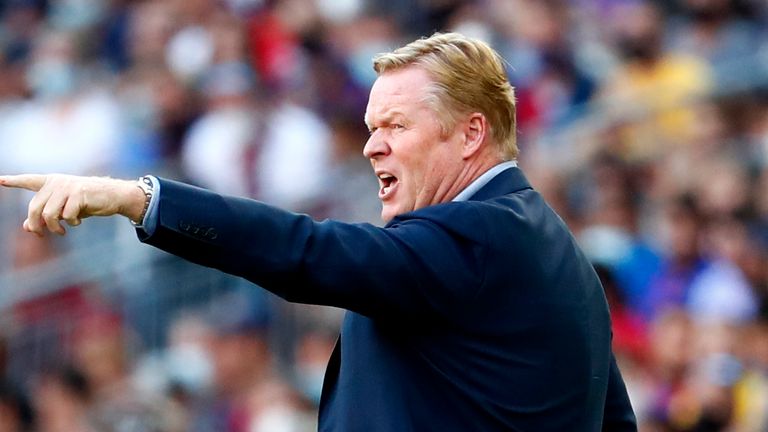 The 58-year-old was appointed in August last year and in his first season led the Catalans to third place in La Liga and won the Copa del Rey.

However, it has been a different story this campaign following the departure of Lionel Messi, who left as a free agent in the summer to join Paris Saint-Germain, with financial issues leaving Barcelona unable to afford his wages.

Pressure had been building on Koeman since a 3-0 defeat at Benfica in late September, which made this season the club’s worst-ever start to a Champions League campaign.

Barca then succumbed to a 2-0 away loss to Atletico Madrid in La Liga on October 2, while their 2-1 weekend loss in El Clasico was Koeman’s third in a row to Real, and after the final whistle, the Barcelona boss was targeted by a crowd of fans who attacked his car as he tried to drive away from the stadium.

So what now for the beleaguered La Liga club and who is in line to replace Koeman?

A timeline of Barcelona’s dramatic 2021

Current Barcelona B coach Sergi Barjuan will temporarily take charge of the first team while a decision is made on Koeman’s successor.

Who will succeed Koeman in the long term though?

Former Barcelona midfielder Xavi – currently in charge of Al Sadd in Qatar – is reportedly in talks over a return to the Camp Nou.

In fact, it is only a matter of time before Xavi’s appointment is confirmed by the club, according to ESPN’s Barcelona correspondent Sam Marsden.

“Xavi would be perfect because he’s loved by the fans, he’s seen as the second coming of Pep Guardiola if you will,” he told Sky Sports News.

“The central midfielder who was key to the Guardiola side and this Cruyff philosophy and how Barca believe they should be playing.

“From what I’ve seen and speaking to people in Qatar, obviously it’s a completely different level from La Liga, but it seems his team does play that way. Santi Cazorla plays under Xavi and said he is radical in his beliefs, and that’s what Barca think they want, we’ll see if it works with these young players.

“Everything is pointing towards Xavi. Joan Laporta is holding talks with him today (Thursday), it looks like a matter of time before Xavi is appointed now.”

Is Xavi the right man for the role?

“The answer is we don’t know,” Marsden added. “It looks like a good fit. If you look at Barcelona’s midfield, at Pedri, Gavi, they’ve got the basis of a midfield for the next 10 years with Frenkie de Jong as well.

“De Jong is someone who believes Xavi can take his game to the next level, there was a feeling he has not perhaps reached the next level many expected.

“If you look at that midfield, with Xavi’s emphasis on possession, position and pressing game, he has the players there for the next few years, if he can nurture and develop them he could have a really good team.”

What next for Barcelona then?

If Xavi does, as expected, return to the club, he will have a massive job on his hands, thinks La Liga TV presenter Semra Hunter.

“Xavi Hernandez, a club legend, has expressed in public that he would one day like to manage Barcelona and that he’s willing and ready to come home as soon as he gets the call,” she told Sky Sports News.

“He’d be happy to come back and take the job, but as of yet, nothing has been said regarding any contact.

“If Barcelona want to compete with the elite, then they perhaps do need to bring somebody else in. In 10 games against some of the biggest clubs around – Real Madrid, Atletico Madrid, Bayern Munich for example in the Champions League – they only won one with Koeman in charge.

“There’s a big gap behind some of those leading clubs that needs to be closed. The games have shown that Koeman maybe isn’t the right man for the job. It might just be that he’s the right man but just not at the right time.”

So what went wrong for Koeman?

Koeman, who spent six years with Barca as a player, was brought back to the club in August 2020 by former president Josep Maria Bartomeu.

New chief Laporta, however, frequently made it clear that the Dutchman was not his appointment.

The duo had an uneasy relationship, with Koeman last month releasing a statement calling for him to be given time to rebuild after losing Messi and Antoine Griezmann in the transfer window.

However, that wish was not granted and after just 14 months at the helm, the club parted company with Koeman.

“Barcelona are not the force they once were and Sunday’s defeat to Real Madrid in El Clasico – their fourth straight Clasico loss – was a stark reminder of that.

“Koeman was brought in at the end of one of Barcelona’s most successful eras and he was handed the unenviable task of trying to steer the Catalan giants through unchartered waters as they looked to move on from talisman Lionel Messi.

“It was a tough job, especially with the off-field issues hampering the club, but it proved too big a job for the Dutchman as he leaves with Barcelona languishing in ninth in La Liga.

“Koeman, speaking in the press after his third straight defeat at the hands of Real Madrid – believed his team were improving, but it was difficult to see how. They were second best against Real on Sunday and it was plain to see in what was a not so classic Clasico performance from Barcelona.

“Another defeat, this time at the hands of Rayo Vallecano, proved a step too far for the powers at be at the Nou Camp as they finally relieved the former Everton boss of his duties.”

3 – Barcelona are winless in their last four away trips in LaLiga (D2 L2), failing to score in the last three – they have failed to score in three league away games for the first time since since February 2003 (3). Run. pic.twitter.com/cd1Q8QWz7f

After the 1-0 loss to Rayo, Koeman said: “In the first 15 minutes, we had problems to get into the game. They pressed us well but after that, I think we controlled the game on a small pitch against a team that runs a lot and presses hard. We had good chances but we didn’t finish them.

“Today we lost the match not because of our attitude, not because of the way we played because I don’t think there are other teams that had so many chances against them, therefore the issue is that we didn’t score and I can’t say anything else.

“It may be we are unlucky. It may be that we have injured players, but these are excuses because the team showed today and showed in the game against (Real) Madrid that we are at a good level. But being at a good level is not enough. What counts in the end is always the result and we lost the last two games. Everyone has to analyse their matches and I try to analyse today’s game – it’s incredible we lost.

“In the last few years our rivals, the best teams, were strengthened each season, while we couldn’t do it. And this is something that also counts – not in today’s game because in today’s game the injuries had a huge part. I think we played a good game, even if you shouldn’t talk about ‘good games’ when you don’t score.”