Canadians, Englishmen, and Americans affected the tides of the war by storming the beaches of Normandy! Many young men knew they might never return home once they joined the fight. Sgt. Jensen worked with the 626th engineer light equipment company. He said that other soldiers didn’t even know where they were going until they arrived. It told us everything we needed to know. It really surprised us to be heading to Normandy. We were either at high school or jobs after high school. We were not soldiers, at least not yet.

Teenage German Soldier In Distress After His Capture

It is difficult to find WWII photos that are not emotionally charged. Look at this photo of 16-year-old German soldier Hans-Georg Henke. He was captured on April 3, 1945, by the US 9th Army. It seems his parents died a year earlier, and that tragic event made him join the Luftwaffe. John Florea, the photographer, described the boy as shocked and crying. He was a young boy who went through the worst of the war.

A German Soldier In A Dugout During The Great War

The war was a massive trench fight. In the Civil War, soldiers dug trenches to provide defense and give them a place to fight from. In Belgium and France, soldiers had to stay in the trenches for weeks on end resulting in “trench foot” and assorted other diseases. Rats were constant companions. Further, the trenches offered only limited protection from heavy artillery shelling and no protection at all from poison gas attacks. Soldiers had to rise from the ditches to engage the enemy. Unfortunately, in front of them was usually an open field (often mined) with little cover, and they were likely to be wounded or killed as they advanced. Note in the photo that this soldier has apparently cut a helmet in half and attached a portion to his neck and lower face area in hope of protecting these areas from shrapnel and bullets. He also carries a “potato masher” hand grenade on his belt and a formidable bayonet attached to his rifle.

You see men laughing and having a great time. It is even better than you thought. The soldiers in Easy Company had been chilling in Hitler’s castle in the Bavarian Alps. In the miniseries “Band of Brothers”, you will see this particular scene. Hitler purchased many homes across Europe, including this one in Berchtesgaden. It was bombed on April 25, 1945. On May 4, SS troops set the hiding bunker on fire just hours before U.S. troops entered the bunker through secret tunnels. The soldiers rewarded themselves by stealing the beer and getting drunk.

Lawrence Of Arabia In Real Life

Lawrence found himself in an unlikely position during the Great War. He was a British demolition artist who worked with Arab rebel allies to destroy isolated Ottoman bridges. Lawrence of Arabia, he was. He committed assaults on 79 bridges on the railway and demolished them. Railways were so damaged that some parts still show traces of the attacks.

A photo by Felice Beato in 1863. It was hand-colored in the original version. He took full-length portraits in the studio because he was intrigued by traditional costumes and cultural traditions. His photos of Japan came with vignetting that made them more painterly. This photo was taken of Koboto Santaro, a Japanese commander. We don’t know what he has in his hand, but stay away.

The Red Army Liberated The Auschwitz-Birkenau

When the Soviet Army arrived at Auschwitz on January 27th, 1945, they found a warehouse of belongings. They found syringes, needles, prosthetic limbs, and shoes. Then they found out it was full of sick and starving people the Nazis had left behind. Elisavetskii was one of the first soldiers to go into the camp, “They rushed toward us, shouted, fell on their knees, kissed our boots, and threw their arms around our legs.”

A Soldier Heading Home After

Ernst Haas, in a photo essay called “Homecoming,” showed the desperation and confusion in Europe in the aftermath of the Holocaust. A Soldier

A Civil War Veteran In Pennsylvania

The Civil War veterans were still around in the 20th century. In 1956, the last one of them passed away. If they could follow orders and hold a gun, they went to war regardless of their age. The survivors were able to tell a lot of stories to the kids in their later years. This photo was taken in 1935. 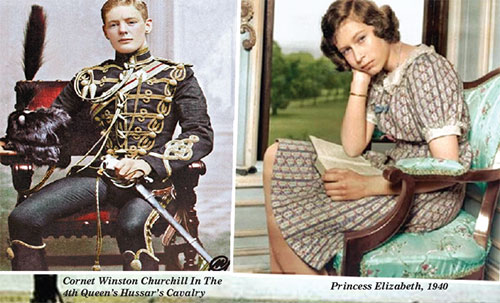 Winston Churchill is best known for his dedication to England. As a young man, he was part of the 4th Queen’s Hussar’s Calvary. He was 21 years old in this photo.

The Seaforth Highlanders And Dog In French Trench

The Great War was unmatched in its brutality and carnage. Soldiers from all over the world were often extremely underprepared for war. However, The Seaforth Highlanders of Scotland stepped up to fight. They became known as the Northern Scottish Brigade after the merger of the 78th Highlanders and the 72nd Highlanders. The men originally served in India, but were reassigned to France. Later moved to Palestine and Iraq.

Men were in the war against Germany and Japan. Women filled in the voids in the job market by taking jobs in utilities, transportation, and manufacturing. Almost 2 million women went to work to make armaments and machine parts for the war effort. The working women in the labor force increased from 27% to 37%. A Young

Mata Hari Was A True Icon

The lovely Mata Hari was a spy and dancer storming the planet. People named her a democrat, a courtesan, and more! This is what the National Ballet director and choreographer Ted Brandsen has to tell about her: “What intrigued us is the tale of a woman with an intense lust for life and a strong instinct to live, reinvent and change herself. She had a lot of terrible stuff happening to her, and she tried to spin it somehow to find her way out.”

Mata Hari became a spy during the Great War. She combined sex and espionage in her life. She started out with some talent for impersonation. During her early career, she masqueraded as Lady MacLeod, the child of an English lord. As a spy she only lasted a few days. On the 15th of October, she was shot to death by a firing squad. She wore no blindfold and blew a kiss to the men.

The Battle of Normandy went on from June 1944 to August 1944. The parties in Western Europe battled for supremacy, and the fight was not easy. We doubt that the 156,000 soldiers knew that the fighting would go on for nearly a month. It began on June 6 but was meant to begin earlier. The operation was delayed due to bad weather. Eisenhower’s final speech was to the brave troops, “You’re about to embark on the Great Crusade.” Your eyes are upon the world.

Dutch Resistance Fighters On The Streets Of Breda After Its Liberation

The world was shocked when Germany invaded Europe in 1939. The Nazis were much faster and more violent than anyone imagined. Resistance fighters from different regions banded together to help liberate their countries. The Dutch underground provided intelligence, radio communications, and household sabotage. In 1944, the south was liberated. The north was not liberated for another 8 months.

King Ferdinand and Queen Marie of Romania In Dover, England

Marie of Romania was born in Edinburgh, Scotland in the year 1875.

It was only 18 years later that she married Crown Prince Ferdinand and became an Eastern European monarch. Researchers have found that she was extremely influential in Ferdinand choosing to ally with the British rather than the Germans. They spent over two decades in Romania before they travelled over to Western Europe to perform royal duties on a diplomatic tour. It was 1924 when they visited Belgium, France, Switzerland and the United Kingdom. “Apart from the common aims, which we pursue, there are other and dear ties between us. Her Majesty the Queen, my dear cousin, is British born,” King George V offered when speaking about the couple.

Princess Elizabeth Wanted To Help With The War Effort

It was the peak of WWII, and everyone was feeling patriotic, wanting to help with the war effort. Even Princess Elizabeth is no exception! She nagged her father, the King, into allowing her to help out. After turning 18, she obtained the permission she needed to train as a truck driver and mechanic, as a part of the Women’s Auxiliary Territorial Service. Now the Queen of the United Kingdom (among other territories), we think it is awesome that she desired so greatly to do physically help her country back then.

A German Soldier Duo And Their Donkey

We all know how pig a part animals played during the war. They were used to carry injured soldiers, weaponry and ammunition back and forth and between checkpoints. They were also used to clear out the land. Horses, donkeys, mules, dogs among many other animals were all used during the horrific events of war. The soldiers pictured were prepared for their upcoming battle; even their horse was prepared also.

The Russian sniper pictured below is Roza Georgiyevna Shanina. She was an active sniper during WWII and was only one of many Russian women active in the military at the time. She was special however. A volunteer, she was a sharpshooter. By the end of war she had 59 confirmed kills, some feat. She was tragically killed in 1945 during the East Prussian Offensive.

Prior to becoming the Monarch of the UK, Elizabeth was very much once a Princess, and a teenager. If you look below, you can see a photograph of her reading a book in a beautiful day-off frock, casually relaxing by a window. The attention to detail by the coloring of this photo is pretty amazing.