Antonio Conte is expected to finalise a deal to become Tottenham head coach on Tuesday after a day of productive talks following Nuno Espirito Santo’s sacking.

Former Chelsea boss Conte, who Spurs targeted before appointing Nuno in the summer, has been offered an 18-month deal by Tottenham and arrived in London on Monday for face-to-face talks, according to Sky in Italy.

Negotiations with the Italian, who has been out of work since leaving Inter Milan in the summer, entered the final stages on Monday after Nuno was dismissed less than five months since he was appointed head coach.

Tottenham are eighth in the Premier League, 10 points off leaders Chelsea, after the 3-0 home defeat to Manchester United on Saturday. 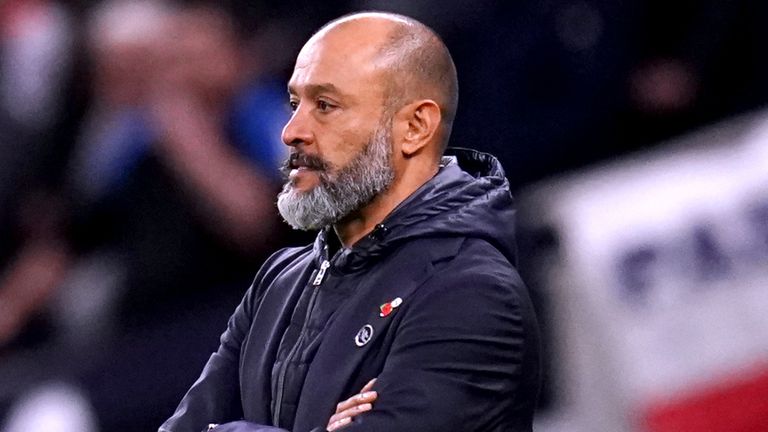 Paul Gilmour reports from Tottenham’s training ground, where Nuno Espirito Santo has been relieved of his duties as the club’s head coach

Nuno, 47, signed a two-year contract in June following a protracted search to find Jose Mourinho’s successor, with his tenure lasting just beyond four months and a total of only 17 games.

The departure of Nuno, who left Wolves in May after four seasons in charge, means Tottenham are looking for their fourth permanent manager in the last three years.

A Spurs statement said: “The club can today announce that Nuno Espirito Santo and his coaching staff Ian Cathro, Rui Barbosa and Antonio Dias have been relieved of their duties.

“A further coaching update will follow in due course.” 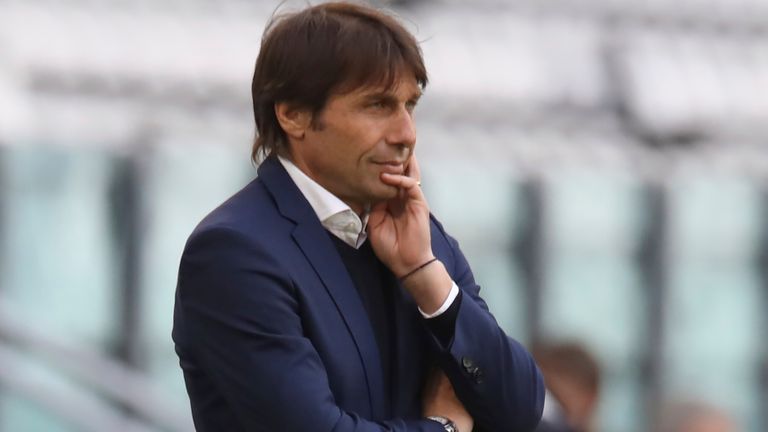 Antonio Conte has a ‘strong negotiating position’ in his potential move to Spurs given the club’s poor run of results, says Sky Sports News’ Paul Gilmour.

Spurs are next in action with a home game against Vitesse Arnhem in the Europa Conference League on Thursday ahead of a visit to Everton in the Premier League on Sunday.

Spurs managing director of football Fabio Paratici added: “I know how much Nuno and his coaching staff wanted to succeed and I regret that we have had to take this decision.

“Nuno is a true gentleman and will always be welcome here. We should like to thank him and his coaching staff and wish them well for the future.”

Tottenham fans booed Nuno’s decision to replace Lucas Moura with Steven Bergwijn in the second half of the defeat to United, which followed last weekend’s Premier League loss at West Ham.

Sections of the Spurs support also chanted “we want Levy out”, with England captain Harry Kane, who expressed his desire to leave the club during the summer, also a target of frustration for some fans. Former Tottenham midfielder Michael Brown is not convinced that the appointment of Conte will be enough to convince Harry Kane to stay at the club.

Conte departed Inter by mutual consent in May, just three weeks after leading the club to a first Serie A title in 11 years, adding to the three league titles he claimed with Juventus between 2011 and 2014.

The 52-year-old became embroiled in a dispute with the club’s owners after they proposed a downsizing of his squad, with Inter chairman Steven Zhang reportedly asking Conte to cut his wage bill by 15 to 20 per cent.

Conte had joined Inter after leaving Chelsea, where he became one of just four managers to win the Premier League in his first season in English football. Despite winning the FA Cup in his second season at Stamford Bridge, the former Italy boss was dismissed after a fifth-placed league finish.

Conte’s record of 51 victories from 76 games gives him the second-highest win rate of coaches who have taken charge of at least 50 Premier League games, trailing only Manchester City manager Pep Guardiola.

Analysis: A decision based on performances, not results

It was a decision that was taken swiftly, that was taken as a direct consequence of emergency talks yesterday following that 3-0 home defeat against Manchester United – a defeat that didn’t put Tottenham in the best light. They didn’t have a shot on target, there was a loud, noisy reaction from the crowd especially when Lucas Moura was subbed. You think back to the booing and just how much noise there was coming from the stands, the fans making their displeasure known. 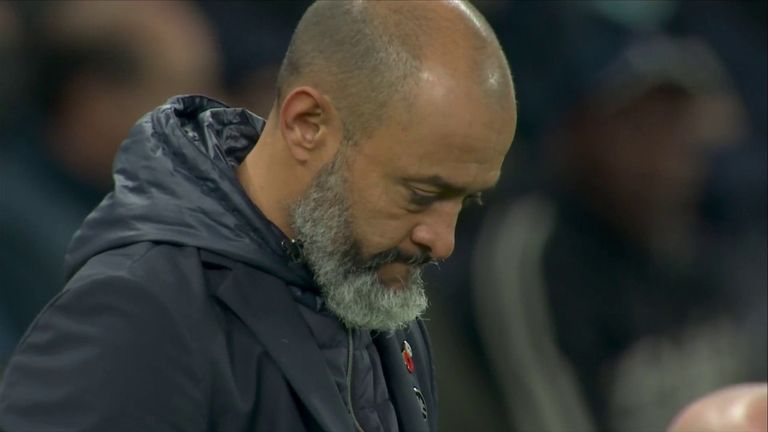 After a dream start to life at Tottenham, Nuno Espirito Santo quickly saw performances and results fall away.

So that sparked those emergency talks yesterday, Daniel Levy, Fabio Paratici and the board met to discuss and the outcome is known this morning and the outcome is that Nuno Espirito Santo will leave his position after such a short time.

This is around performances, they were the key factor in this. In terms of being still quite close to the top four and if the team was playing well and scoring lots of goals and playing attacking football then it maybe wouldn’t have come to this but it is really the manner of those performances that have really concerned the Tottenham board and Daniel Levy.

Ultimately, as the manager that’s what will want happen when Daniel Levy and the board get it into their heads that performances have not been good enough, so that has been the real key and it has been the style of football that has disappointed Tottenham the most. 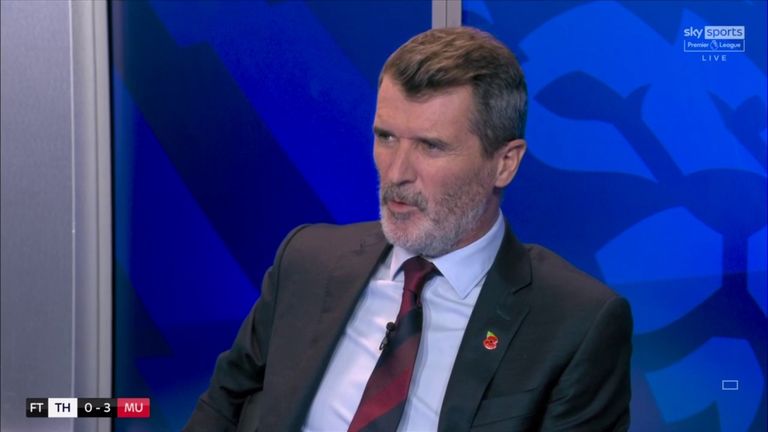 “Things moving very quickly indeed with Antonio Conte in London for talks with Tottenham, Sky in Italy are reporting, and that this is in the final stages of negotiations.

“Talks will continue today, but what a coup this will be for Tottenham, whose fans will be forgiven for thinking we have been here before.

“They tried to get Conte in the summer, he was a key target for them, but it did not happen. In fact, it was the beginning of being a long-drawn-out saga.

“If not, then Ryan Mason has stepped in before and is still at the club.

“The question is – can they find an agreement….?”

“It’s not a particularly tough decision, I’m afraid, if you look at the start he’s had. It was always going to be a big step up for him. Let’s not forget how he left Wolves, which was painted like it was mutual consent but the owners wanted him out, and that he hadn’t taken them to the next level.

“You can’t underestimate the job he had done, the football they played in the Championship, how he brought that to the Premier League, how they were able to be so good at home especially.

“That partnership had come to its natural conclusion – the Spurs job was a strange one in many ways, but with how they went round the houses, and eventually came back to Nuno, it was always going to be tough.

“The personnel weren’t necessarily his type of player, with Matt Doherty a good example – he left Wolves a year before because Nuno didn’t want him anymore.

“Harry Kane hasn’t looked himself after the Man City saga either, and without your best player it’s always going to be a nigh-on impossible job.”

Spurs have not had a shot on target in their last two hours and 16 minutes of football since Harry Kane’s header in the 44th minute against West Ham and Keane delivered a withering assessment of their display.

“Spurs are boring,” complained Sky Sports pundit Keane. “They are boring to watch.

“You’re looking for a bit of urgency. Nothing. I couldn’t believe how bad they were.” 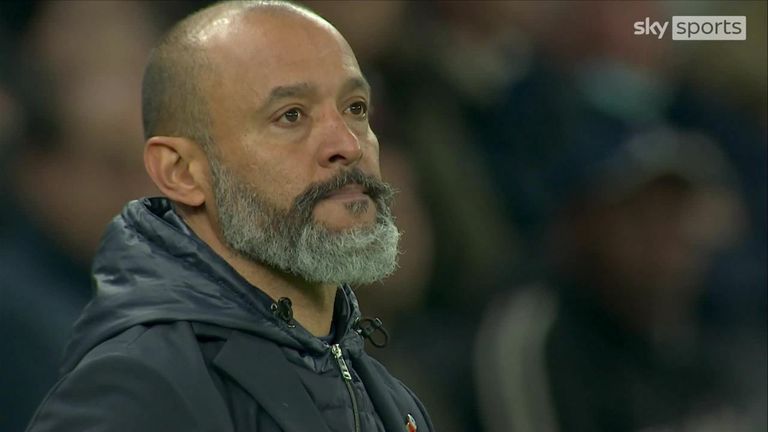 Former Tottenham midfielder Jamie O’Hara branded the club’s defeat at home to Manchester United as a disgrace and criticised Nuno for lacking ideas.

Kane was seemingly singled out for criticism from the stands and Keane believes the England captain has not “recovered” from being denied a summer move out of Tottenham.

“It’s not a good combination when you’re not keeping clean sheets and Spurs, traditionally, you think of them scoring goals but they’re not even doing that. It’s the type of defeats they’ve had too,” said Keane.

“You do have to have some sympathy with the manager because he’s come in, thinking, ‘I’m going to be working with a world-class striker in Kane’ but that saga has dragged on. Kane hasn’t recovered from it and the team hasn’t.”

Fellow Sky Sports pundit Graeme Souness agreed with Keane, saying: “This was the perfect game for Man Utd because Spurs are toothless; the stats tell you that – not a shot on target.

“They’re relying on Kane, Son and Moura for a spark but they look a shadow of the players they’ve been in the past.

“If you’re a Spurs supporter, you’re turning up wondering what you’re going to get. They’re toothless and they were very, very average today.”

“It could be a difficult season at Spurs. You wonder where they’re going. Mid-table at best.”