Babar Azam and Wanindu Hasaranga have climbed to top spots in the ICC’s latest rankings for T20I batters and bowlers, respectively, with the latter achieving the feat for the first time in his career.

Babar, who has been crucial in Pakistan’s run to the semi-finals with a four-in-four record, is the third-highest run-getter in the ongoing T20 World Cup, with 198 runs from four innings. That has helped him return to the top for the sixth time after last securing the spot in January 2018. Babar’s tally of 834 rating points has him 36 points ahead of second-ranked Dawid Malan. The England batter had been at the top since last November. 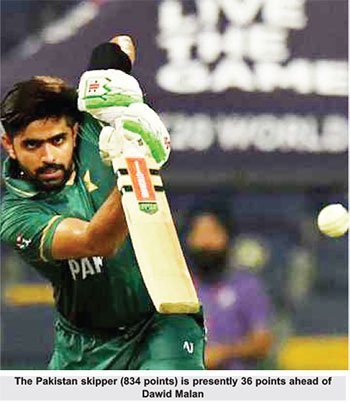 The latest rankings update also sees Jos Buttler move from 17th to his career-best ninth on the batting chart on the back of his match-winning 101 not out against Sri Lanka. He has accumulated 214 runs in the UAE so far.

Among the other batters moving up, Aaron Finch has gone from sixth to third, and just outside the top 50, Temba Bavuma has risen a remarkable 35 spots to No. 52.

In the T20I bowlers’ rankings, Hasaranga, on the back of his twin three-wicket hauls against South Africa and England, overtook Tabraiz Shamsi of South Africa to reach the top spot. He is also the leading wicket-taker in the tournament with 14 strikes from seven matches.

South Africa’s pace mainstay Anrich Nortje, who is the fourth-highest wicket-taker in the T20 World Cup with eight scalps from four matches at the moment, also moved up by 18 places to be seventh. Other bowlers who have gained in the rankings include Dwaine Pretorius (up 65 places to 34th) and Shoriful Islam (up 77 places to 38th). Within the top 20, Chris Jordan has moved up four slots to ninth, Ish Sodhi is up six places to tenth, and his spin twin Mitchell Santner has gone up four places to 17th.

In the allrounders’ list, Mohammad Nabi has caught up with No. 1 Shakib Al Hasan on 271 rating points. Hasaranga has climbed to fourth. (ICC)