OG Anunoby added 21 points and five rebounds for the Raptors, who have won five in a row and four straight on the road.

Bradley Beal scored 25 points along with seven rebounds and seven assists for the Wizards, who have now lost two in a row. Montrezl Harrell had 15 points and 10 rebounds for Washington, while Kyle Kuzma had just two points on 1-of-10 shooting before leaving the game with a bruised forearm in the third quarter.

The Raptors, who led by 16 during the third quarter, were ahead by nine entering the fourth. The lead reached 12 points with 7:36 to play after Khem Birch scored four straight points for Toronto.

Anunoby hit a three-pointer with 7:04 to play, increasing the lead to 15 but the Wizards scored the next seven points.

When Harrell made a layup with 3:53 remaining, the margin was six. After Beal missed a three-point attempt, VanVleet came back with a layup, then Dinwiddie missed a three with 1:04 remaining before the Raptors put the game away.

Durant soars with 32 against Hawks 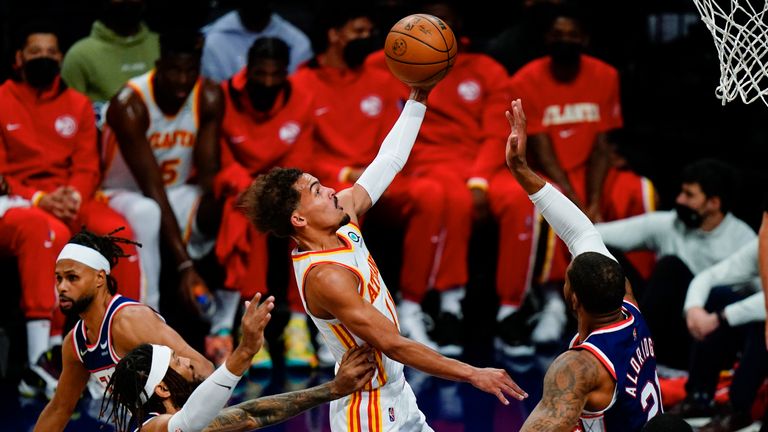 Kevin Durant scored 15 of his 32 points in the third quarter when the Brooklyn Nets surged ahead and pulled away for a 117-108 victory over the visiting Atlanta Hawks in New York.

Durant helped the Nets close the third by scoring 13 points in a 20-4 run that spanned the final 4:40. He snapped a 75-75 tie with two free throws and capped the quarter with an off-balance three over Cam Reddish just before the buzzer to put Brooklyn up 95-79.

Durant posted his third 30-point game of the season and the star forward shot 13 of 20 from the field. He also collected seven rebounds and five assists. James Harden followed up his first triple-double of the season with 16 points and 11 of Brooklyn’s 34 assists.

DeAndre Hunter hit a career-high six three-pointers and scored 26 points, but Atlanta lost for the 11th time in the past 13 meetings against the Nets. Trae Young scored 11 points in the opening quarter and finished with 21 and 10 assists on 6-of-22 shooting from the floor. Myles Turner hit a career-high seven three-pointers, including two to start a game-opening 11-point run by the host Indiana Pacers, who never trailed in a 111-98 win over the New York Knicks.

The Pacers have won two straight following a four-game losing streak while the Knicks have dropped two in a row after a three-game winning run.

Turner finished with a game-high 25 points while adding 13 rebounds in his third double-double of the season. The center entered Wednesday with just 11 three-pointers in the first eight games but went 7-for-10 from beyond the arc to top his previous career-high for three-pointers – five, which he did twice before.

Caris LeVert scored 21 points, including nine in the third quarter as the Pacers held off a pair of Knicks rallies. Julius Randle (18 points, 14 rebounds) posted a double-double for the Knicks while RJ Barrett scored 23 points. Georges Niang contributed 18 points, Tyrese Maxey added 14 and Furkan Korkmaz had 11 for the Sixers, who won their fourth in a row.

DeMar DeRozan led the Bulls with 37 points and 10 rebounds while Zach LaVine added 27. Lonzo Ball had 13 for the Bulls, who had won six of seven entering this game. Nikola Vucevic grabbed 10 rebounds.

When Maxey converted a twisting layup with 4:11 left, the Sixers led 98-89. The Bulls then surged back and DeRozan’s shot in the lane with 29.9 seconds left closed them within 100-98.

Curry then responded with a jumper with 10.7 seconds remaining as Alex Caruso was waving his hand in front of his face to seal the game. 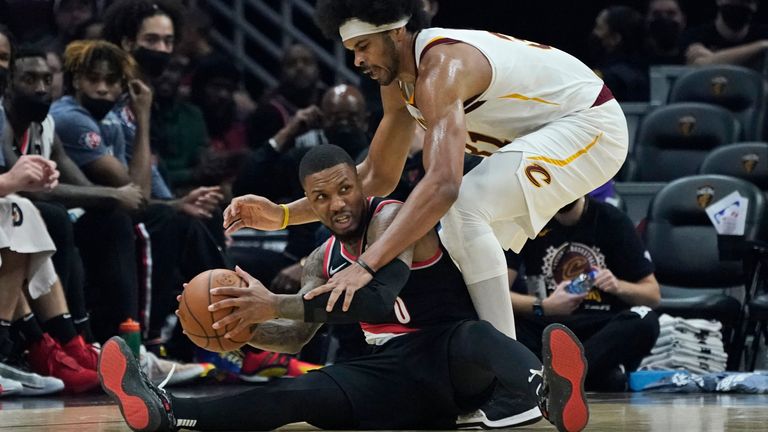 Jarrett Allen collected 24 points and 17 rebounds to lift the host Cleveland Cavaliers to a 107-104 victory over the Portland Trail Blazers.

Collin Sexton scored 21 points, Darius Garland added 19 points and 10 assists and Evan Mobley had 11 points and 11 rebounds to fuel the Cavaliers to their second straight win.

Damian Lillard scored a season-high 26 points despite a 3-for-12 performance from three-point range.

Norman Powell scored 18 of his 23 points in the first half and CJ McCollum added 21 points for the Trail Blazers, who concluded a fruitless three-game trek and fell to 0-4 on the road this season.

Lillard drained a three-pointer and McCollum made a short bucket to trim Cleveland’s lead to 103-101 before Mobley and Sexton answered with a pair of buckets to push the lead back to six.

Lillard converted a three-point play to halve the deficit, but his off-balance attempt from deep caromed off the rim to end the game.

Celtics respond with win over Magic Jaylen Brown paced four Boston players in double figures with a game-high 28 points and the Celtics ended a three-game losing streak with a 92-79 win over the host Orlando Magic.

Boston opened the third quarter with 16 straight points – creating a 21-0 run that spanned the middle periods – as a Robert Williams III basket gave the Celtics a 60-46 advantage.

Boston, who squandered a 14-point lead after three quarters on Monday night in a 128-114 loss to the Chicago Bulls, had no such problems holding out this time as Orlando got as close as 84-70 with 3:59 left.