India has come to the rescue of Sri Lanka by airlifting 100,000 kg of liquid nano nitrogen for urgent distribution among farmers protesting against the government’s failure to provide required fertilizer and agro-chemicals.

Two Indian Air Force Globemasters arrived at the Bandaranaike International Airport (BIA) in perhaps one of the largest if not the biggest single airlift carried out by a foreign air force here.

The Sri Lankan Airlines airlifted the first consignment on Oct 21. In spite of original plans to bring 500,000 litres of liquid nano nitrogen within a week, it didn’t materialize.

The Indian High Commission spokesperson said that the deployment was essentially in support of Sri Lanka’s initiative towards organic farming and to expedite availability of nano nitrogen fertiliser to the farming community.

“The quick deployment of IAF aircraft and expeditious disembarkation overnight was indicative of close coordination between the IAF and the SLAF,” the spokesperson said. 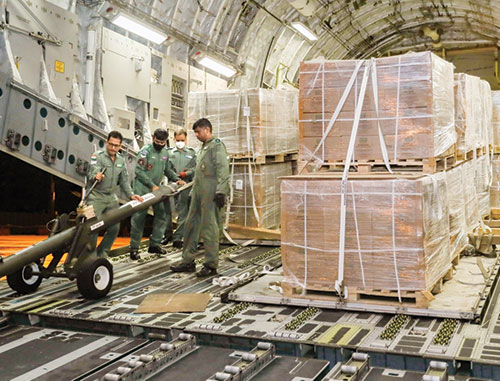 The second consignment arrived in the country amidst an ongoing inquiry into the controversial circumstances in the payment made by Sri Lanka for liquid nano nitrogen procured from IFFCO via their local agent United Farmers Trust Ltd on Oct 18. Following accusations made by the JVP in Parliament, Presidential Secretary Dr. P. B. Jayasundera requested the CID to conduct an inquiry into the payment made by the People’s Bank on behalf of Sri Lanka.

The Indian HC recalled how Indian Naval Ship Sarvekshak had undertaken a survey operation off Colombo in June- July 2021 for ensuring safety of navigation after incident onboard MV XPress Pearl. Separately, INS Shakti was deployed for providing 100 tonnes of Liquid Medical Oxygen during the fourth wave of Covid pandemic.

“The Government of India has continued to support Sri Lanka in times of critical requirement as part of its ‘Neighbourhood First’ policy and has repeatedly demonstrated its capacity and role as the ‘First Responder’ in the region.”

Samagi Jana Balavegaya lawmaker Rohini Kaviratne pointed out that though the Maha season was underway the farmers were yet to receive promised fertiliser. Government politicians wouldn’t be able to visit the farming regions, MP Kaviratne said, adding that idiotic government had ruined the maha season. The MP said that the Chinese action against the People’s Bank over the Commercial High Court of Colombo stopping payments was an extremely serious matter. The government seemed unable to comprehend the situation; she said adding that the country would face a sharp drop in the Maha yield.