Yibir made it three Grade One Breeders’ Cup victories for Charlie Appleby and William Buick with a power-packed finish in the Turf to deny Broome and Aidan O’Brien.

The Ballydoyle-trained five-year-old had kicked clear around the final turn but was reeled in by the Godophin three-year-old, who flew home down the outside to deliver a third victory for Appleby in two days.

Speaking after the race, the winning jockey said: “It’s amazing to have this amount of success on the world stage and I’m lost for words really.

“I’m in a very privileged position to work for Godolphin and ride these great horses. You take on the best jockeys and best horses at the Breeders’ Cup, so the last two days have been unbelievable.

“I can’t believe what Yibir did today. He was pulling my arms out for the first half of the race and I thought we were in trouble. He was amazing and picked up really well.”

A delighted Charlie Appleby added: “I’m delighted for the team and they’ve done such a fantastic job. A lot of credit goes to Shane Fetherstonhaugh, as he rides Yibir out and he’s not the easiest character.

“To have three winners on this world stage is fantastic and it’s been a great weekend for team Godolphin.”

Favourite Tarnawa was disappointing for Dermot Weld and Colin Keane, never getting into contention and finishing towards the rear of the field.

In the Breeders’ Cup Classic, Knicks Go took the lead out the gates and would not surrender that advantage for Joel Rosario and Brad Cox.

America’s biggest race was arguably won at the gates as Knicks Go stole a length at the front and was able to control the pace from that point.

With an uncontested lead, he was briefly challenged by Hot Rod Charlie down the inner but Rosario had enough horse underneath to pull away again in the finish, beating Medina Spirit for Bob Baffert by three lengths. 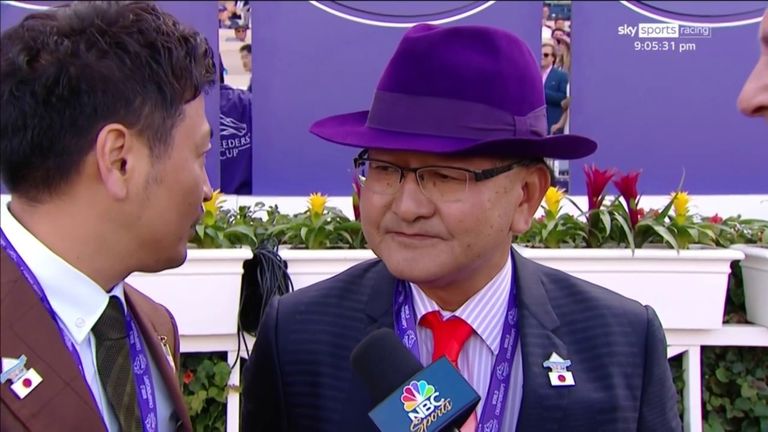 Yoshito Yahagi, trainer of Loves Only You, said it is a dream come true to become the first Japanese winner of a Breeders’ Cup race

Favourite Letruska couldn’t get to the front and instead was forced into going too fast up front, with the three early prominent runners all fading in the final two furlongs.

That doubled Yoshito Yahagi’s tally after Loves Only You took the Filly & Mare Turf earlier on the card, with Japan recording their first ever Breeders’ Cup victories on the night.