The Department of Meteorology says there is a possibility a low-pressure area to develop in the south-east of Bay of Bengal (BOB) during next 24 hours.

It is likely to intensify further and expected to move towards North coast of Sri Lanka, it said issuing an advisory.

Due to the influence of the low-pressure area which is about to form in the Southeast BOB, heavy showers and sudden increase of wind speed 60-70 kmph are expected over the sea area 04-08N and 86-92E.

Naval and fishing communities are advised not to venture the South-East Bay of Bengal sea area (04-08N and 86-92E) from tomorrow (08) evening, until further notice. Since there can be very heavy showers or thundershowers associated with strong winds up to 60-70 kmph over the aforementioned sea area.

Department of Meteorology says it is closely monitoring the situation and that naval and fishing communities are requested to be attentive about future bulletins issued by the department in the next few days. 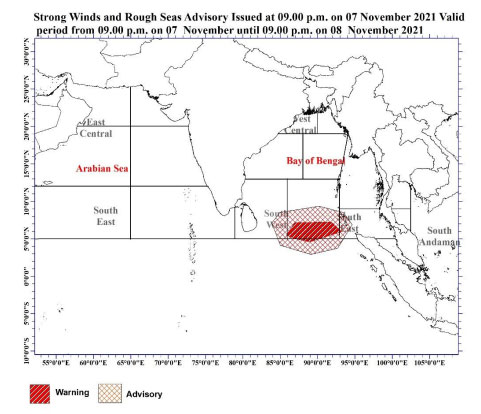 Meanwhile the Met. Department earlier announced that showery conditions are expected to enhance further in Western, Sabaragamuwa, North-western and Northern provinces and in Galle Matara, Kandy and Nuwara-Eliya districts during 08th and 9th November, due to influence of the prevailing wind convergence zone in the vicinity of the island.

Very heavy showers above 150 mm can be expected at some places in Western and Sabaragamuwa provinces and in Kandy and Nuwara-Eliya district.

Heavy showers about 100 mm can be expected at some places in North-western and Northern provinces and in Matale, Galle and Matara districts during next 24 hours.

The general public is requested to take adequate precautions to minimize damages caused by temporary localized strong winds and lightning during thundershowers.