The Meteorology Department says a low-pressure area has formed in the south-east Bay of Bengal and is likely to intensify further in to a depression during next 36 hours and move West-Northwestwards towards North Tamil Nadu, closer to the North coast of Sri Lanka.

There can be very heavy showers or thundershowers, strong winds up to 60-70 kmph associated with rough seas over the aforementioned sea area and the sea areas around the Island.

Naval and fishing communities are advised not to venture the South-west Bay of Bengal sea area and deep and shallow sea areas around the Island (mentioned in the map below) until further notice.

Those who are in aforementioned sea regions are advised to return to coasts or move to safer areas as soon as possible, the Met. Department warned.

Fishing and naval community are also requested to be attentive regarding future forecasts issued in this regard. 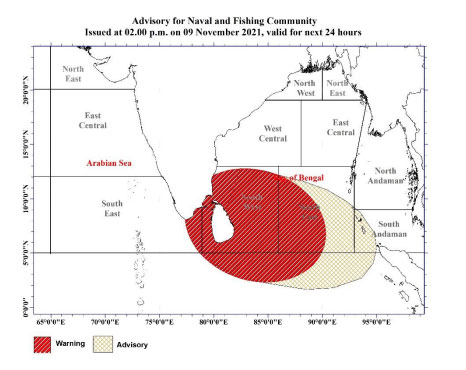