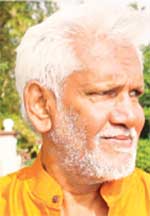 Remember the bygone years! Daughters got married and became pregnant a few rounds more than the current rate. The average production line extended to about four. Some even went further; ‘A’ team types came close to two-digit figures.

Today, the story is different. “One is enough, and he will get all we have,” is quite a common comment and a few over-step the planned reproduction limitations purely by accident and reach the second round. Either way, the count is kept low, relative to the statistics of the previous generations.

Let’s make a few comparisons, I do recall the yesteryear, same show as common as grass blades. The drum major of a mother-in-law invaded and took over the whole show, lock stock and cradle, as it were. Of course, she did not come alone but with Asilin or Cicilin, who was her lifetime faithful in the domestic department––Mary and the little lamb type who accompanied her everywhere. That was it! The husband and the mother-to-be had no chance, the whole traditional rigmarole was performed from tying a one cent coin to the ‘buriya’ to feeling the head lest it not shape and the new born ends up looking like a miniature ET. And the cradle, it did its own rounds, booked at the conception to be borrowed at confinement. This here is a jealously protected family heirloom that had served the entire family tree and may have lasted so long that the mother herself had laid on it and swung crying for milk. Talk of sentimentality! Man, you only had to use your nails and chip a bit to see pink and blue layers covering each other on the cradle wall, a sure sign of the different types that started life here.

Of course, the grandmother duties lasted till the new ‘mama’ learnt the tricks of bathing and feeding and the rest that went along with the show. Then it was time to go. The bonus was there, Asilin or Cicilin was left behind in reserve mode; just in case the new mother found the going a bit too demanding. Don’t forget this wasn’t the diaper age, a dozen nappies hung like white bats on a long line to dry, hand-washed and hand-ironed.

The fairy tale so begun continued. The other daughter residing in Galle, then the favourite niece in Kandy, they all needed the major-domo. Each one getting ready, “on your marks, get set” to contribute to the population explosion. Nothing like having the Mother Hubbard around, at times a little painful, but as a totality, a great asset, one had to weigh the pros and cons and compromise. Heads she wins, tails she wins, too. That’s how it all happened; we’ve seen the script which hardly changed except for the granny actress. They all were the same, they only differed by name.

Now, the Ballard has changed. The elder daughter lives in New York and the younger one is in Wellington. Tickets will come but no Asilin and Cicilin, it is the Major Domo who has to trudge alone changing planes. She sits long hours in cheese class totally ignored by the Trolley Dollies––they do not know here is a ‘baby bringing expert’––and she makes it to the destination before the baby pops out. Of course, this is all done in happy mode and very convenient, too, for the daughters and sons-in-law to have these ‘know-alls’ coming across continents to take over baby matters. If you are lucky, the Seeya gets spared, but you could be unlucky, too. The grandfather duties are so different from the Major Domo’s. Travel half the world to sit and wait like yesterday’s newspaper and maybe push the cart and carry the bags at the supermarket and come home and taste Shiraz and watch HBO. The neighbours are there but they only nod, and their kids maybe thinking you are from “Wizard of Oz” with your chocolate-coloured face. It certainly is a solitary game for the Seeya, far removed from the chaotic serenade that he lives in Sri Lanka. And lo and behold, if you object to accompanying the major domo. You have no choice, like the centipede who was asked to put his best foot forward. And if you refuse, the entire family tree would fall on you from the trunk to the little leaves, in condemnation; best make the trip; you can at least come back home, and tell the drinking buddies in counterfeited glee how great the first world is.

The seasons, too, play a big part in this rigmarole. If the birth is in the summer, great! But it could be otherwise, and the poor Major Domo now must wrap herself in anything and everything to fight the chilly winter gray. Must be more like puss-in-boots inside the house, wearing the fluffy pink or indigo moccasins that were left behind by the other granny who arrived on holiday two years ago.

The pre-journey preparation is something else. The bag can carry only so much weight, but the entire grocery store has to go. Juggery, Lamprais, Achcharu, Milk Toffee, and a bit of this and that which includes Siddhalepa and Dilmah tea and if space permits some sausages too (as if you couldn’t buy such things in the first world.)

Of course, now you’ve got to find some friend who has a friend who knows a friend working at the airport to tilt the scale a bit for the overweight. Can be done, of course, this is Sri Lanka.

Last week, I spoke to a fellow Caucasian pilot who had just opened his innings as a grandfather. “Yes, the baby was born, all normal, and Helen will go next month to London to see our grandson.” Great, Helen will go and perhaps stay in a hotel and do an evening visit or two and return. Life goes on and my pilot friend is nailed to where he is, baby arrivals have no effect on him; he is just the grandfather who will post them a card with a stork carrying a baby, which says, “Congratulations.”

Well, we can laugh at our Sri Lankan ways, but let’s be happy that we have them. I have already done four trips, Texas, Singapore, and Melbourne twice. I have done the ‘Rata Yana Grandmother tele drama’ and become an expert at that. Of course, I drank the Shiraz and watched HBO and carried shopping bags at the supermarket. But I must categorically state I have enjoyed that and will gladly go again if I am called. Isn’t that all too familiar? For that is what we are. The first world can have all its glitter and gloss that is great. But we in our turpentine polish raise our heads, too, and run behind our children, Major-Domo leading, grandfather following, all to be present to bring back that “old home feeling” in a far away land. That’s us, it is the Sri Lankan way, and no grandmother grudges that and no grandfather can afford to grumble. She is the “must” for the occasion and he is the also ran, simply there not to win but to take part. Coubertin should have thought of Grandfathers when he coined his great Olympic slogan. Yes, the trend is globe-trotting Vinnambu-ammas and they have come to stay, to fly to wherever they are needed to run the entire show when the grandchildren are coming to this world.

Mark my words, if your daughter gets married and goes abroad to settle down in Toronto or Timbuktu, that is a sure sign you must plan the beginning of the merry-go-round ride. Mother certain, father maybe, just get ready. It is only a matter of time before the call comes to pack the bags and go.

Of course, there will be Shiraz and HBO.