Mark Johnston is preparing Group One winner The Last Lion to return from a mammoth absence of over five years in the Betway Golden Rose Stakes at Lingfield on Saturday, live on Sky Sports Racing.

The son of Choisir won four of his 10 starts during a juvenile campaign which started with victory in the Brocklesby at Doncaster and ended with top-level success in the Middle Park Stakes at Newmarket.

The Last Lion was retired to stud after that 2016 victory over Blue Point, but returned to training earlier this year and is closing in on a remarkable comeback at Listed level this weekend.

“He’s been back since around May time,” said Johnston.

“Basically, once it was realised he was infertile, he was retired [from stud duties] and I purchased Godolphin’s half-share and the other owners basically gave him to me.

“John Brown and Megan Dennis are still in, so we decided to give it a go and see how it went.

“He was gelded and it’s taken a long time to get him fit and make sure everything was OK.

“Joe Fanning has had a couple of gallops on him in the last couple of weeks and was very happy with him, so we’ve made an entry.”

While The Last Lion covered a number of mares and produced 13 individual winners, his stallion career did not take off as hoped.

Johnston added: “I don’t think he’s had many foals right from the beginning. It hasn’t been going all that well and it’s just got gradually worse.

“There’s a little bit of trepidation – you’ve got to be careful – but we think we’ve done plenty of work with him and it would be great if he can come back to anything like his former self.

“He’s worked very, very well. Joe Fanning, who was on him in the Middle Park on his last start, said he gave him a great feel, so he’s very excited about it.”

‘Old boy’ Judicial back for more

Former Golden Rose winner Judicial, who took the race in dramatic fashion in 2019 when coming from last to first inside the final two furlongs, is heading back to Lingfield this weekend.

Julie Camacho’s nine-year-old, who has won 17 of his 45 career starts, was last seen finishing third in the Listed Beverley Bullet Stakes in August. 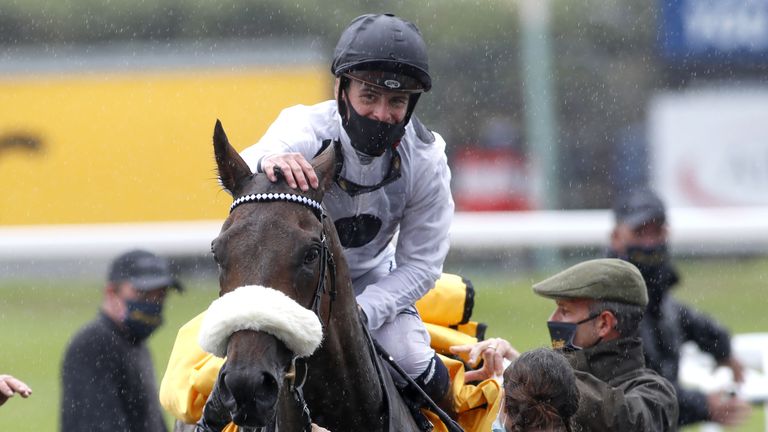 Trainer Julie Camacho says Judicial is set to return in the Golden Rose Stakes at Lingfield, live on Sky Sports Racing on Saturday, as the ‘old boy’ bids to regain his 2019 title

Camacho hopes her “old boy” can get back to winning ways and secure automatic qualification for All-Weather Finals day at Newcastle next year.

She told Sky Sports Racing: “God willing, he heads to Lingfield on Saturday. I know he is getting to be an old boy now but he hasn’t got a lot of miles on the clock.

“He shows all his old enthusiasm at home and is just a lovely horse to have about. We’re so thankful to Elite [Racing Club, owners] for sending us horses like him.

“He won the Chipchase [at Newcastle] so we’re quite happy for him to come back here. We know it’s going to be tough for him as he’s going to be 10 next year but as long as he’s enjoying it and he’s in good form then we’ll carry on.”