Manchester City’s £100m man was left on the bench for the derby. It was the sort of big game that Jack Grealish had signed up to play in and his omission risks adding to the feeling that the former Aston Villa captain has made an underwhelming start.

Just the one goal in his nine Premier League appearances for the club this season does not help. Two assists might be considered the bare minimum requirement too. But how fair is the view that Grealish has failed to live up to those sky-high expectations so far?

For example, his most recent Premier League minutes came in the 2-0 home defeat to Crystal Palace earlier this month. Grealish was criticised but the statistics showed that he created more chances than any other player in the competition that weekend.

Rodri might well have converted his smart square pass inside the box. Had the Spaniard curled that attempt two yards lower then Grealish could have been the architect of the comeback. Instead, he finds his end product is being questioned.

Some of the underlying numbers remain strong. Grealish has created more chances from open play than any other Manchester City player. Indeed, only Bruno Fernandes has created more than him – with the Portuguese losing possession of the ball twice as often.

That ability to carry the ball, such a feature of his game at Aston Villa, also remains. While Allan Saint-Maximin and Adama Traore are regarded as the outstanding dribblers in the Premier League, Grealish tops the charts for ball carries ending in a chance.

Indeed, there is a remarkable similarity between his output for Aston Villa last season and the level of performance that Grealish has been delivering for Manchester City. The creativity and the dribbling, the ball retention and the fouls won, it is all still there. 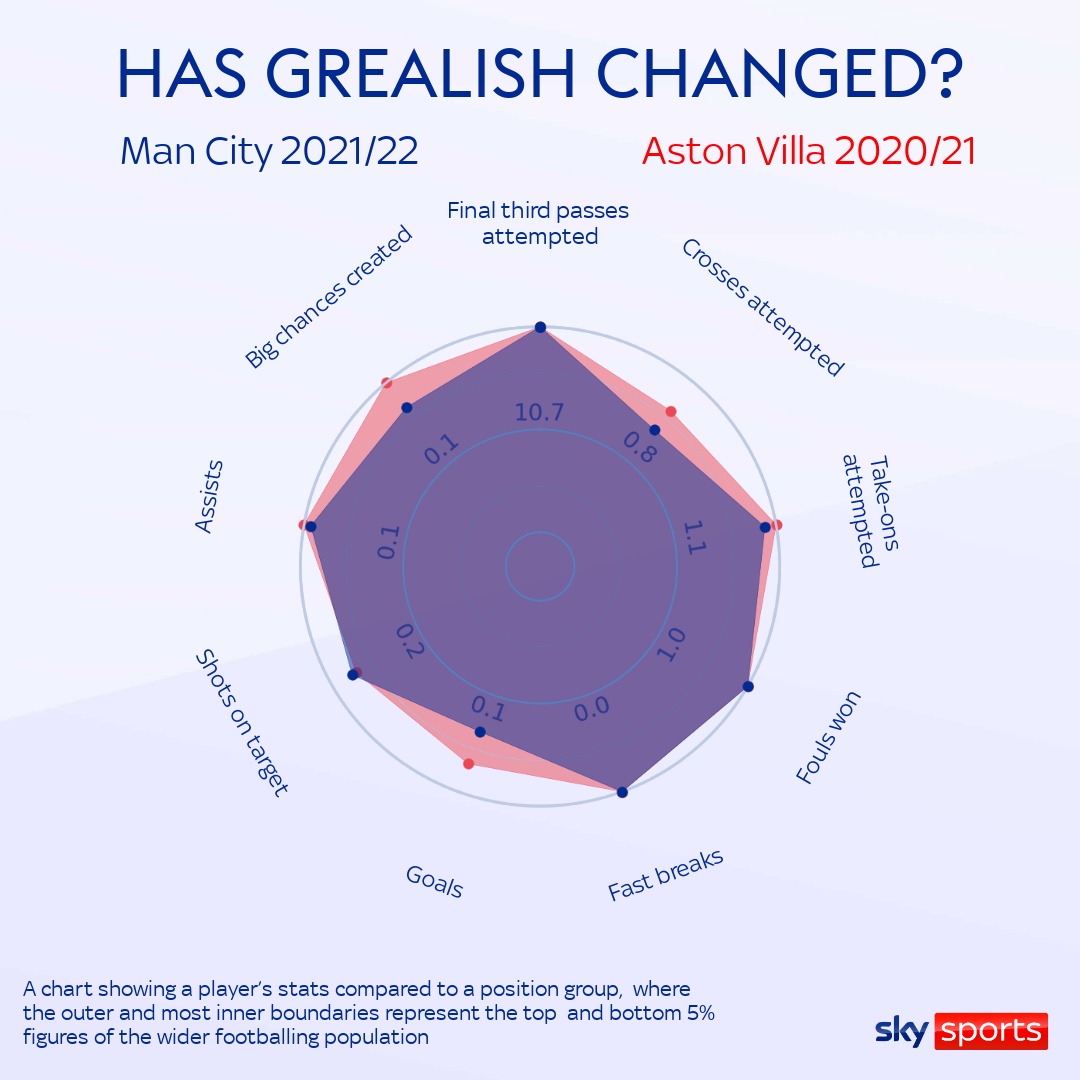 Perhaps the problem is one of perception, progress and price. City did not break the British transfer record so that Grealish could repeat his Villa performances. They did so in the anticipation that playing for the champions would encourage him to develop.

Used in midfield on the opening weekend against Tottenham, that ploy was not persisted with. The experiment as a false nine against Liverpool was unsuccessful. Grealish has been at his best in that same position that he occupied for Villa – on the left of a front three.

But while he was the focal point at Villa, with much of their play coming down that left wing, that is not the case at City where there are other weapons. Grealish has almost accepted his role as a decoy – creating space for his team-mates, as Pep Guardiola has explained.

“His positions are always good and he has really good football perspective. He creates free men when he has the ball. Every time he has the ball, Joao [Cancelo] and Rodri are alone and they can use him or do it the next time so that time it is really good.”

Finding the right balance is the challenge. While Guardiola sees the logic in Grealish’s on-the-ball decisions, he wants more. “With the confidence and a little bit more time he will be aggressive to take his own decisions to score a goal. Step by step, he will get it.”

That is crucial because it is not enough for Grealish to look the part at this level, the onus is on him to excel. There is an opportunity cost to being in the City starting line-up that does not exist in quite the same way if it is Anwar El Ghazi sat waiting on the bench.

The game against Club Brugge last time out in the Champions League highlighted the point. Raheem Sterling came on and scored within four minutes. It was a straightforward goal – a trademark tap-in – but why couldn’t Grealish have scored it?

Only Mohamed Salah has had more touches in the opposition penalty box than him in the Premier League so far this season. But his chances have come on the angle. He is yet to perfect those movements into the six-yard box that have allowed Sterling to feast.

There is time for him to adapt. “What he has done so far is excellent,” says Guardiola. “I am pretty sure he will improve.” There is time too for his coach to find the role which will best harness his talents. “For a manager, you have to see which is the best position.”

There is also a desire to downplay him missing out against Manchester United, in the knowledge that he is playing more regularly than ever before in his career. “It is the first time he has played every three days for 11 months, it is a good challenge for him.” 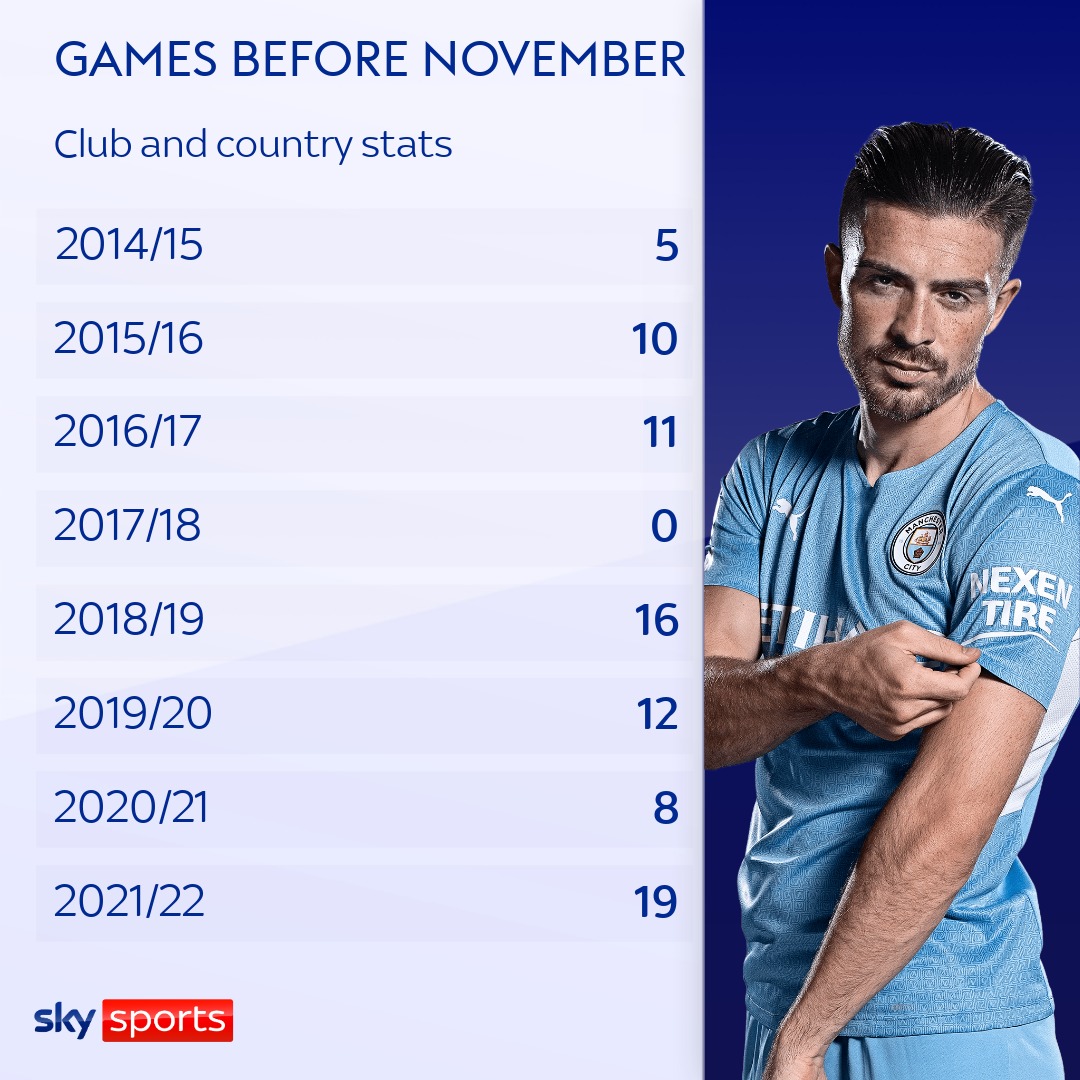 The learning curve under Guardiola has begun. It is a journey that many of Grealish’s new team-mates started some years ago and are still on. The consensus remains that only a lack of appetite for the challenge ahead can undermine him and there are no signs of that.

“He is focused on what he has to do, he is strong, his weight perfect, his mentality in the right position, and hopefully we can help him,” says Guardiola. For Grealish, the education is just beginning.