Rob Cross believes he can start pushing for the world No 1 spot after returning to the winner’s circle at last month’s European Championship following a tumultuous 18-month period.

Having lifted the European Championship title in 2019, Cross was defending £120,000 in prize money, and he was faced with the unenviable prospect of relinquishing his place in the world’s top 20 unless he advanced to the semi-finals.

Cross had displayed glimpses of a return to form during this year’s Premier League, but he was unable to avoid elimination for the second consecutive campaign, which prompted further questions about his ability to compete with the sport’s elite.

Nevertheless, ‘Voltage’ regained his spark in Salzburg, scooping his fourth major ranking title courtesy of an 11-8 victory over Michael van Gerwen in a dramatic final, which he insists was the most important triumph of his career thus far.

“Out of the four majors I’ve won, I’m not snubbing anything else, but it was probably the most important one that I’ve won,” Cross told the Darts Show podcast.

“I needed a win in my career and from where I’ve been, it’s been tough, so it was nice to turn that corner and get that feeling of winning again, because you just cannot buy it.”

Cross was solid if unspectacular en route to European Championship glory – he was rarely troubled by the quartet of Keane Barry, Brendan Dolan, Jose De Sousa and Joe Cullen in reaching the final, despite failing to average above 98 throughout the tournament.

Wayne Mardle has previously referenced Cross’ ability to win major honours when not playing at his best – his World Matchplay and European Championship double in 2019 was a testament to this, and it’s a precious quality to possess.

“When I won the Worlds, I was probably on my A-game, and elsewhere I’ve played my B-game, but Wadey has made a career out of it – not playing to the best of his abilities, but he is a winning machine.

“I have to admit, I love it when I am in those pressure situations; you get that bit of pressure and when you’re pushing through it, you feel like a million dollars.”

Winning breeds winning, and that adage was evidenced just days after his European Championship success, as Cross followed up his first major title in two years by claiming his first Pro Tour crown since 2018.

The 31-year-old fired in five ton-plus averages across seven games to prevail at Players Championship 26, registering wins over the likes of Peter Wright and Vincent van der Voort, before edging out Ryan Searle in the final.

Cross maintained his sparkling form throughout Super Series 8 last week and although he was unable to add another title to his haul, he played in a remarkable semi-final clash against Chris Dobey at Players Championship 28, losing with a 112.95 average.

“I have played better on the floor once I got back after the win. You feel that winning thread and when you’re winning, you just cannot get that feeling anywhere else,” added the 2018 world champion. 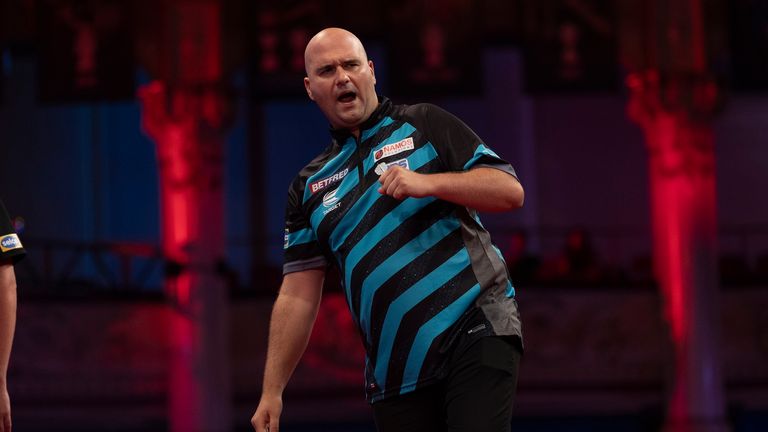 “I feel in myself that there’s so much more there, and that is what I want to get out, instead of trying to play my B-game to win these titles. I want to start playing my A-game.”

“I believe they [Pro Tours] are the hardest things to win in the PDC. The other day I played Chris Dobey; I had a 113 average and I lost 7-4, so it just shows you the standard.

“For me to go in there and win that [Pro Tour], it was another box-ticking exercise, and I feel in myself that there’s so much more there, and that is what I want to get out, instead of trying to play my B-game to win these titles. I want to start playing my A-game.”

Considering Cross boasts four major titles within the last four years, it appears ludicrous to talk about a decline, but prior to his European Championship victory, many were already dismissing his prospects of competing at the sport’s top table once more.

However, not only has he silenced any lingering doubters, he’s now climbed back up to 11th on the PDC Order of Merit, and with little prize money to defend in the coming months, the only way is up.

“I was looking at the rankings five weeks ago and you’re thinking: ‘Ooh, I’m in trouble here, I need to do something about it,” he continued.

“I looked and thought if I don’t do something, I’m potentially 26th in the world. I don’t feel like I should be there, but if you don’t play the darts, you do deserve to be there.”

Cross’ unwavering self-belief has been integral to his success to date. To beat Michael van Gerwen and Phil Taylor to lift the World Championship title on debut, you need mental fortitude in abundance.

However, the heartbreak of losing his grandad at the start of the pandemic contributed to Cross’ form dwindling, and the pressure of competing on the big stage in restrictive ‘bubble’ environments took their toll.

Yet, as champions so often do, Cross found a way, and having produced the type of form that catapulted him to his Alexandra Palace glory over recent weeks, he is in a bullish mood ahead of the defining period of the darting season.

He’s been pitted against world No 4 James Wade, Croatia’s Boris Krcmar and former Lakeside finalist Jim Williams in Group C at the Grand Slam of Darts, as he bids to progress beyond the quarter-finals in Wolverhampton for the first time.

“I still loved the game, but I didn’t enjoy it as much [last year]. I wasn’t myself; I was a little bit flat, and I think you’re worrying about missing that one dart at double.

“Now all of a sudden, I’m not thinking, I’m just going up there and doing. With those competitions and the way I am, I think I have a great run into the Worlds.”

“One game at a time, play each tournament as it is coming, because if I look at it now, for the next 22 or 23 months, I’ve got nothing to defend.

“So, now is the time to push on and get my ranking back up to where I want it. Maybe next year if I can have a great end to this year, I can start pushing for world No 1.”

Don’t miss a dart with all nine days of live Grand Slam of Darts action from Wolverhampton’s Aldersley Leisure Village getting underway on Saturday, November 13 – join us from 1pm on Sky Sports Arena.