Miami Heat fans are beginning to see exactly what Toronto fans have known for years – Kyle Lowry is a special, special player.

Even though it was the acquisition of Kawhi Leonard which tipped the needle to get the Raptors a championship, few fans of the Canadian franchise would argue that their greatest-ever player is anyone other than the 35-year-old now suiting up for the Heat.

You know will get 100 per cent effort, great tenacity and fight from Lowry night in, night out. Importantly, he also inspires team-mates and puts them in the best position to succeed.

Can the acquisition of Lowry do the same for the Heat as getting Kawhi did for the Raptors? Perhaps. He’s certainly offered the team a whole new dimension offensively.

“I love playing with Kyle,” sharpshooter Tyler Herro said. “My first two years in the league I didn’t really have a point guard that could get everyone organised to their spots. That’s no knock on my previous teammates. It’s just the way that Kyle gets everyone to their spots, how he’s a leader. He just understands the game in a way that not many people do.

“Just being next to him is obviously amazing for me.”

The Heat play the Jazz on Saturday and faced them last Saturday, too, winning 118-115. Lowry went and got himself his first triple-double as a Heat player – and the 19th of his career – with 20 points, 12 rebounds and 10 assists.

He did so committing only one turnover in his 36-and-a-half minutes on court, the sixth time Lowry has recorded a triple-double with only one turnover – and that’s against one of the toughest teams in the Western Conference. 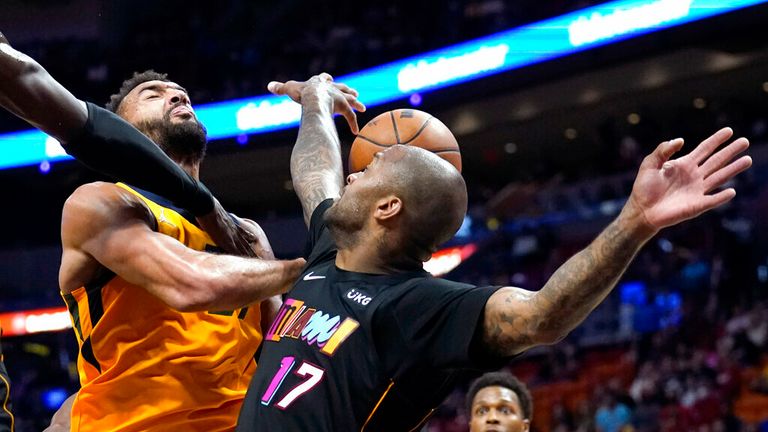 “Kyle really set the tone,” coach Erik Spoelstra said of the performance. “To have the triple-double just shows he can impact the game in a lot of different ways.”

“That’s my guy,” said Jimmy Butler, one of Lowry’s closest friends in the NBA. “It’s definitely a blessing to share the floor with him. Everybody knows how much love I have for him.”

As Couper Moorhead, who covers the Heat for NBA.com notes, Miami are a totally different team when Lowry is on the floor.

They average fifth-slowest in pace and are middle of the pack in transition frequency but when Lowry is on the floor Miami’s pace rockets up to the second-fastest pace in the league (103.6 possessions per game). When he’s off the floor, they’re playing at a pace (95.5 possessions per game), which. would be the slowest since the 2017-18 season.

Spoelstra said of Lowry: “It’s not necessarily that bottom line number of your fastbreak points or your pace, but when those happen and if you can get some key easy ones during key moments of the game, that can be the difference of winning and losing, and that can take your offense from one level to an entirely different tier.

“But his pace is one of the things that I dreaded the most competing against him because it was those unpredictable, unscripted moments that you can’t really scheme against, and his level of IQ and skill level in those moments is as good as anyone in the league.

“I think that will help our group, particularly if we can defend the way we want to but also to generate some easy buckets going the other way.”

Duncan Robinson, one of the best spot-up shooters in the league, is settling now after a slow start to the year – not unlike Lowry – and he has a different way of interpreting his team-mate’s unique playing style.

Robinson said: “It’s controlled chaos. But it’s so beautiful because it’s like, he plays with such a pace that when you’re just watching, sometimes it’s like that looks ridiculous, like he just chucked the ball down the court, but it’s not just reckless abandon. It’s actually calculated, playing with pace and pushing the tempo.

“He has this unbelievable ability to know when to do that and then know when to, alright, we need to slow it up, we need to get a good one or we have this stretch of game where we need to manipulate the clock and we can’t play that way.”

Another element of Lowry’s character, and a big factor in what earned him an $85million contract over three years aged 35 in free agency, is what he can inspire from his team-mates. He complements perfectly a sometimes divisive character in Butler, and his irrepressible drive is perfect for a team of young ball players looking to succeed.

He also has championship pedigree that is vital in any locker room.

“Not that it’s perfection, it’s just that we’ve got to do it the right way,” Lowry said, when asked what he demands of his team-mates. “You’re never going to be perfect, but kind of making sure that we’re on the same page, we’re having open lines of communication.

Watch Lowry and the Miami Heat face the Utah Jazz at 10pm on Saturday night, live on Sky Sports Mix.