Without LeBron James in action many of the frailties of this Los Angeles Lakers team have been nakedly exposed in the last week or so and Anthony Davis – the number two go-to man – is not at all happy.

The Lakers were blown out by a Minnesota Timberwolves on a six-game skid after having lost games to the Oklahoma City Thunder and then the Portland Trail Blazers since James went down with an abdominal strain.

Overtime wins over the Charlotte Hornets and Miami Heat have not been enough to paper over the cracks for a side which is struggling to find balance and consistency, ahead of this evening clash with the San Antonio Spurs – live on Sky Sports YouTube channel.

But more than that, the collapse after half-time against Minnesota suggests perhaps some deeper issues to deal with. The Timberwolves outscored the Lakers 40-12 in the third on Friday night. The surge started with a stunning 29-4 run out of halftime, and Russell added 11 points early in the fourth quarter as the underachieving Wolves rolled to their first win since October 27.

“We sucked,” Davis said when asked about the third. “No defense. Can’t score. That’s not just this third quarter, it’s every third quarter we’ve played this season. We come out slow, lackadaisical offensively and defensively. We got to get it together. Why? I can’t tell you. But we got to do a better job.”

Including the mauling at the hands of Minnesota, the Lakers have been outscored by 83 points in the third quarter this season, according to research by ESPN Stats & Information. It’s the worst points differential by any team in any quarter this season.

“We got to decide who we want to be. A championship team? That’s not us right now,” Davis said. “We’re not winning a championship the way we’re playing. We got to be better, and we got to care more for our wins at home. Wins in general. That was embarrassing.” 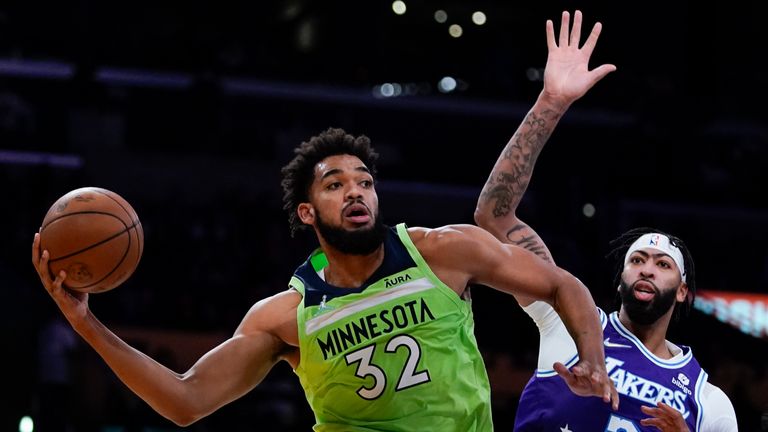 “The inconsistency is a problem,” Russell Westbrook said when asked about L.A.’s third-quarter woes.

Adding to L.A.’s letdown was the fact that the loss snapped a two-game winning streak that was supposedly sparked by a similar loss to the Portland Trail Blazers last weekend when the Lakers said they vowed as a team to play with better energy and effort moving forward.

“Well, there’s no better motivator than a bad loss,” Lakers coach Frank Vogel said. “I think our guys are angry, our coaching staff is angry, and we’ll get back to work and do whatever we need to do to fix it and get our execution better. And all of those things: effort, focus, execution.”

Davis said the Lakers will benefit from a film session in order to try to get back on track ahead of their next game against the San Antonio Spurs.

“What we can’t do is, one, point the finger,” Davis said. “You know, ‘It was you.’ ‘It was you.’ ‘It was you.’ ‘This play was you.’ Like, we got to stay together. And we’ll stay together. But also, we got to learn from the film. And so the film tomorrow is going to be big for us to have another heart to heart about these type of games. We hate feeling this way. Obviously, if we lose – we’re going to lose games, everybody loses games. But doing it the right way. Having a team actually beat us. Not beating ourselves.

“And those are the frustrating ones, when we beat ourselves.”

For Westbrook, whose 33rd birthday on Friday was soured by a game in which L.A. trailed by as many as 33 points, the film will only reinforce what was abundantly clear during the game: This cannot be the team’s standard this season.

“Sometimes you know it’s time to let it go and move on,” Westbrook said. “Sometimes you cuss people out and get on everybody’s ass and sometimes you just kind of let it play out. We’ll watch film tomorrow. We’ll kind of see the vibe, and I think there’s not a soul in that locker room that doesn’t know what we were supposed to do tonight, and we just didn’t do it.

“So, sometimes you just kind of… you already know. You don’t need to beat a dead horse.”