Wales moved into second place in World Cup qualifying Group E with a 5-1 victory over Belarus on a night where Gareth Bale won his 100th cap.

Wales flew out of the blocks, taking the lead inside two minutes when Aaron Ramsey was on hand to tap home after Ben Davies’ strike was parried into his path.

Neco Williams doubled their advantage on 18 minutes when his tame strike somehow squirmed beyond the clutches of Belarus goalkeeper Syarhey Chernik. Bale, who became just the second Welshman to play 100 times for his country – joining Chris Gunter, was replaced at half-time. Bale ruled out any injury concerns and said his departure had been planned.

Ramsey stepped up in Bale’s absence to convert a penalty on 50 minutes before Davies scored his first international goal when heading home a Harry Wilson corner. Artyom Kontsevoy scored a stunning consolation but Conor Roberts restored the four-goal cushion in the last minute.

Man of the match: Neco Williams

The result moves Wales three points ahead of Czech Republic in second place with Belgium the final visitors to Cardiff on Tuesday.

Wales have already guaranteed a play-off spot through the Nations League but finishing second gives them a chance of being at home in the play-off semi-finals, although they need to claim as many points as possible to give them the best chance of being seeded. A draw on Tuesday will be enough to secure second spot ahead of the Czechs.

The play-off draw for the European nations takes place in Zurich on Friday, November 26 at 4pm UK time.

How do the play-offs work?

On November 26, the 12 teams will be drawn into three play-off paths for one-off semi-finals on March 24 and finals on March 29. The three path winners will qualify for the World Cup.

This night was about more than World Cup points, however, as Wales fans paid tribute to a player seen by many as the greatest in their history.

Bale received a rapturous reception from a Cardiff crowd who have witnessed so many of his magical moments since he became Wales’ then-youngest international in 2006.

Chernik had been at fault for Bale’s last-gasp winner in Kazan two months ago and the Belarus goalkeeper carried on from where he had left off inside two minutes.

Davies’ volley from the edge of the area should have been safely gathered, but Chernik spilled it and the lurking Ramsey tapped home into an empty net.

But Wales did double their lead after 20 with another helping hand from the hapless Chernik.

Bale found Williams and the Liverpool full-back squeezed his shot in at the near post with Chernik fumbling the ball over the line.

The Real Madrid forward failed to reappear for the second half and, with their captain off, Ramsey took the armband and also penalty-taking duties when Ruslan Yudenkov handled five minutes after the break.

Ramsey sent Chernik the wrong way for his 20th Wales goal, moving him past Craig Bellamy into sixth place on the all-time scoring list.

Williams almost added a brilliant fourth before Davies marked his 68th cap with his first Wales goal, the ball going in off his shoulder from a Wilson corner.

Belarus substitute Artem Kontsevoi claimed a consolation three minutes from time, but Roberts had the last word as Wales scored more than four for the first time since beating China 6-0 in March 2018.

Bale: No injury, substitution was planned

“It was always the plan to play 45. I’ve been out for two months – we always said if we were up in the game I’d come off and try and get ready for Tuesday. I’ll see how I feel the next few days and we’ll decide from there. No injury, that was the plan. As much I would have loved to come off to an ovation the most important thing is the team, you can only have three slots of substitutions. I’m happy to get the reception before the game and enjoy the occasion. It was a hard road to get back from injury but it was well worth it. I have a few mementos to go with the occasion and my family and friends are all watching. It was a special occasion.” 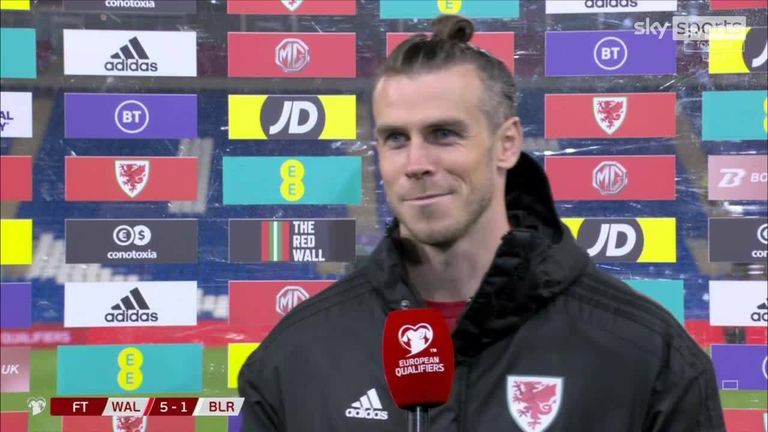 What the manager said

Wales boss Rob Page said: “We knew we could create chances with the team we selected, and it was all about executing it. I was really pleased with the performance. When we had the opportunities today we were clinical. I thought to a man we were magnificent.

“We’re in a good position in the table now. We’ve given ourselves a great chance. We want to finish off in style, we don’t want to limp across the line. We want to go toe to toe with the best teams in the world and give it a go.” 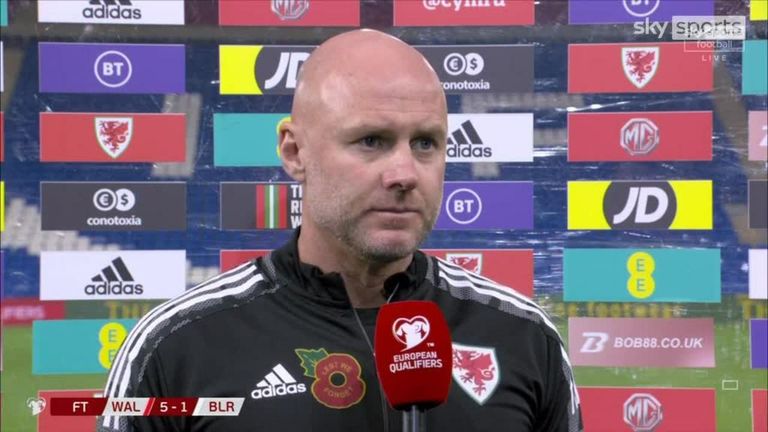 Wales end their World Cup Qualifying campaign at home to Belgium on Tuesday, live on Sky Sports; kick-off at 7.45pm.