A bald-headed person, seated in a corner chair, in the deserted The Island editorial, looked at the writer as he entered the office. In spite of the spacious office being air-conditioned, he was smoking a cigarette. “Why are you wearing a tie? Remove it, call me Anton. Roll-up your sleeves, sit over there. Bala should be here soon.” That was the response, the writer received from the late Anton Weerasinghe when he addressed the first individual he encountered as “Sir” on the first day at The Island Editorial on the morning of June 1, 1987.

At the time, the writer joined The Island as a novice, Anton Weerasinghe, a veteran in the field, served as the Chief Sub Editor, and Bala was actually the late Peter Balasuriya, the then News Editor. A smiling Weerasinghe advised that journalists should always be on first name basis with their colleagues and the only exception was that the novices addressed the Editor-in-Chief Gamini Weerakoon “Sir.” Weerasinghe called him “Gamma.”

Vijitha Amarasinghe, the then Sports Editor, inquired whether the writer would like to join the Sports Desk. But, the Indian ‘parrippu drop’ on June 4, 1987, which brought an end to the first Brigade-level military onslaught ‘Operation Liberation’, conducted against the LTTE, in the Jaffna peninsula, made me quite interested in covering the conflict though at that time the writer was only 19 and fresh from school, didn’t have any idea at least as to how to work on a story. India’s forced intervention plunged the country into unprecedented turmoil.

Violence, instigated by the JVP, erupted in the wake of the Indo-Lanka Peace Accord of July 29, 1987, which was literally shoved down our throat. Shocking assault on the then Indian Premier Rajiv Gandhi, with a rifle butt, at a guard-of-honour in Colombo, by an enraged naval rating, killing of UNP MP for Tangalle Jinadasa Weerasinghe, grenade attacks on the UNP parliamentary group, in Parliament, which claimed the life of Matara District MP Keerthi Abeywickrema (the writer covered Abeywickrema’s funeral at Matara. It was the first coverage in a series of funerals of assassinated politicians and officials), security forces, police and pro-government sponsored death squads, unleashing counterterror against the JVP, and a censorship on the media, made print journalism quite a challenge and exciting. At the time there were no private TV channels.

The incident involving Susantha Punchinilame, at the Ratnapura by-election in July 1988, underscored the situation at that time. A gun-toting Punchinilame, a UNP lawmaker, caused havoc in Ratnapura, on that day, with the late Gamini Dissanayake in charge of the overall operation. The writer and staff photographer Saranapala Pamunuwa had to take to his heels when armed men, accompanying Punchinilame spotted Pamunuwa taking pictures.

Amidst repression by the government as well as the JVP, the print media struggled. Censorship made the task even more difficult. Typed and hand written copy had to be taken to the Government Information Department where the government appointed Competent Authority deleted articles or sections of them. There had even been times earlier when the Competent Authority operated from the Upali Group complex.

As Norman Palihawadana, Rohan Gunasekera, Jehan Haniff as well as Suresh Perera covered the security/’police round’, the writer found it extremely difficult to get sufficient space but subsequently received the opportunity to engage in quite a bit of security coverage. In fact, the eruption of the second JVP insurgency gave the writer an opening to work with experienced Divaina journalists. Seniors Peter Balasuriya, Abeywardena and Wickremathunga were always helpful.

The visit to Kapparathota, in the Weligama electorate, in late July 1988, with staff photographer Jude Denzil Pathiraja, in a vehicle driven by now retired driver Premalal, was fraught with danger. Having covered the first landmine blast there, we ended up at Hambantota where Lt. Colonel Vipul Botheju of the Gemunu Watch had succeeded the then Air Commodore A.B. Soza, in charge of overall security there. Violence gripped the South, where the armed forces and UNP para-military groups waged war against the JVP aka DJV (Deshapremi Janatha Viyaparaya). On and off visits to the deep South, the Central as well as the North Central Provinces over the next few years, drove home the uncertainty and despair as never before. A visit to Kudawella, in Tangalle, with Divaina veteran Dharmaratne Wijesundera, took a nasty turn when the JVPer, whom we met, was killed by the Army. The JVP accused us of passing information to the Army. However, we managed to convince them by pointing out we were taken there blind-folded and couldn’t pass information about a location we didn’t know. In another incident, a drunken soldier almost shot dead UNL driver Podimahattaya opposite the Ja-Ela police station. The soldier found fault with him for wearing a pair of shorts and accused him of carrying JVP posters.

At a time, the media here lacked access to information regarding the developments on the Indo-Lanka front and the JRJ government did everything possible to hinder media, Aloy Perera provided the latest news based on All India Radio (AIR) broadcasts. The Island, at the time, depended so much on foreign radio broadcasts. On the advice of editor Gamini Weerakoon, the UNL brought Aloy Perera a top of the line Sony radio available at the time. Aloy considered the radio his private property. During a certain period (1987-1990), the media had to obtain information pertaining to incidents in the Northern and Eastern Provinces from the Indian HC in Colombo.

The Island can be certainly proud of its coverage of the northern and southern terrorism and developments in other fields, including political as well economic and waste, corruption and irregularities over the past decade. There cannot be any dispute over The Island stand against terrorism, even during the times various governments succumbed to international pressure. During the 2002-2004 UNP administration, The Island came under tremendous pressure over its reportage of the ground situation. The UNP relentlessly brought pressure on the UNL as it did during the 1987-1990 period when India battled the LTTE in the North and the East and the UNP fought the JVP in the South. The UNP believed it could suppress the truth by intimidating the media. Ranil Wickremesinghe-led UNP went to the extent of closing down the SLBC’s “Vanni Sevaya’ to appease the LTTE and restricting the Army from issuing daily security situation reports.

During the troubled times, too, The Island continuously published the music page that had been a key attraction, at a period social media was unheard of. The young and the old liked Ivan Alvis’s ‘Music page’ and the writer used to take down lyrics of popular songs at that time. Perhaps, Ivan’s music page is the longest such page in Sri Lanka. At the inception of The Island, it was Ivan’s father, the late Ben Alvis, who started a column, called “The Heart of the Matter”. Then it was Ivan’s late younger brother David, who did a music page till he migrated to the United States. It was Ivan who directed me years later to Abdullah Luthufi, the Maldivian mastermind of the sea-borne attack on Male.

The Island, too, like other print and electronic media, experienced trials and tribulations throughout its existence. In spite of the eradication of the JVP terror by early 1990 and the LTTE in 2009, the country had succumbed to corruption and the situation deteriorated to such an extent, the Parliament, in spite of being the custodian of public money, seemed to be simply overseeing waste, corruption and irregularities. Before discussing the pathetic state of the national economy, let me remind two persons whose lives were snuffed out. 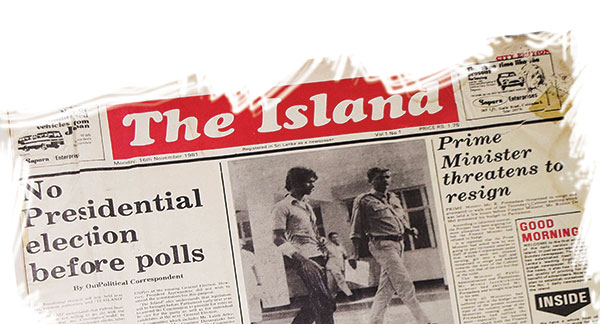 During the rush hour on July 24, 1996 evening, the LTTE triggered multiple explosions in a train at Dehiwala killing 64 persons. Over 400 suffered injuries. Among the dead was Sudeepa Purnajith, an artist, stamp designer and cartoonist who had been on The Island editorial before joining the Associated Newspapers of Ceylon Limited (ANCL)/Lake House.

Lasantha Wickremetunga was assassinated near Attidiya Model Primary School in the morning rush hour on January 8, 2009. Wickrematunga, one-time Private Secretary to the then Opposition Leader the late Sirimavo Bandaranaike, defeated SLFP candidate at the 1989 general election and the Editor-in- Chief of the now defunct The Sunday leader was on his way to work when he was killed. The first Rajapaksa administration never cleared accusations directed at it over Wickremetunga’s killing as well as abduction and assault on Keith Noyahr, Deputy Editor of now defunct Nation on the night of May 2008 and attack on one-time Divaina editor Upali Tennakoon on the morning of January 23, 2009, at Imbulgoda. Tennakoon, the founding Editor of Rivira published by the Rivira Media Corporation, was on his way to office with his wife Dhammika.

Just over a year later, the UNP-led Opposition and Western countries that accused the war-winning Army Commander General Fonseka of those attacks backed him at the 2010 presidential election. The TNA on the advice received from the US threw its weight behind Fonseka, who lost badly by a huge margin of over 1.8 mn votes though the Tamil electorate, including LTTE leader Velupillai Prabhakaran’s home town Valvettithurai voted for him overwhelmingly. Having lost the presidential bid, Fonseka successfully contested the 2010 general election, under the JVP-led alliance, only to be deprived of the seat under controversial circumstances, served a prison term and got released, thanks to US intervention, formed his own party for the 2015 general election, only to be totally rejected. With the help of UNP leader Wickremesinghe, Fonseka re-entered Parliament in 2016 on the UNP National List. In 2020 Fonseka switched allegiance to the newly formed Samagi Jana Balavegaya. Now, Field Marshal Fonseka represents the Gampaha district.

Quite a number of journalists perished during this period. Dharmeratnam Sivaram aka ‘Taraki’, one-time The Sunday Island defence columnist, was abducted and killed on April 28, 2005. Taraki, who had been with Dharmalingam Siddarthan’s PLOTE, which made an abortive bid to assassinate Maldivian President Mohammed Abdul Gayoom, in Male, in early Nov 1988, propagated the line that the LTTE could never be defeated, militarily. During many discussions on the issue, Taraki quiet confidently asserted that the Army lacked the strength to sustain a major offensive in the Jaffna peninsula. Sivaram cleverly used the print media to convince those in authority of the LTTE’s ‘invincibility’. In early 1996, Taraki was proved wrong when combined security forces brought the Jaffna peninsula under their control. Four years after Sivaram’s killing, the combined armed forces eradicated the LTTE once and for all. Over 12 years after Sri Lanka’s triumph over terrorism, the country seemed to be in a far worse situation than experienced at the height of the war in the North.

Sri Lanka has certainly lost the ‘war’ against corruption. The print and electronic media, including social media reportage of corruption, paint an extremely bleak picture. A section of politicians and officials seemed to have caused irreparable damage to the national economy. Their actions seemed even worse than the devastating LTTE suicide attack on the Central Bank on the morning of January 31, 1996. In spite of eradication of terrorism, the country failed to achieve its true potential due to corruption. That is the undeniable truth. The proceedings of parliamentary watchdog committees prove that the House had failed and the country is in the grip of an utterly corrupt system. The media (social media included) regardless of some sections succumbing to perks and privileges, remain the real Opposition.

The Global Tamil Forum (GTF), spokesperson Suren Surendiran recently declared that The Island is the only Sri Lankan media to provide them coverage at a time no other print, or electronic media, here, had the guts to do so. The UK-based Surendiran was referring to the then President Mahinda Rajapaksa’s second term (2010-2015). Following the 2004 April general election, the EU election monitoring mission declared that The Island reporting of the poll as the most balanced.