The month of November 2021 marks the 100th Birth anniversary of an Educationist par Excellence, Sugunadasa Athukorale, one of Nalanda’s greatest Principals who guided Nalanda’s destiny for 13 long years, from 1969 to 1982. Nalanda was going through a difficult time during the early 1960s due to various internal issues such as disagreements among staff members and no Principal could manage the situation which had gone out of control and even the students were getting involved in the disturbances. The Education Ministry appointed young Gunapala Wickramaratne as the Principal of Nalanda in 1964. Within a matter of weeks, he took control of the situation and instilled discipline and order in the school. Wickramaratne was able to turn around Nalanda in a short period and Nalanda became one of the best disciplined schools. But his stay was short, and he was promoted and transferred in 1969.

Mr. Athukorale, an Old Anandian, was serving as the Principal of Thakshila Vidyalaya, Horana, before his transfer to Nalanda. He was an extremely good Mathematics Teacher found his fiancée Hema also to be another good Mathematics teacher. She later taught Mathematics at Nalanda in the middle school, and became Mr. Athukrale’s life partner when she got married to him. His son Upul, who also studied at Nalanda is now domiciled in Canada, while his two daughters Gayathri and Savithri are living in Sri Lanka. Gayathri served in the tutorial staff of Nalanda as a teacher of Information Technology.

Mr. Athukorale was born in Keeranthidiya, in Matugama, on 12th November 1921 He had his education at Ananda College, Colombo. His administration skills were fine-tuned when he led the ‘Mathugama, Horawala Dodangoda Gam Sabawa’ as its head for two consecutive terms. He had relinquished his duties as the Head of the Gam Sabawa when the government took over the schools; he automatically became a state official. 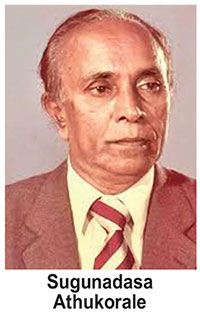 Mr. Athukorale by his actions, behavior and mannerisms set an example to the students, how one should have patience and tolerance, and how one should focus on one’s goals and work towards achieving it.

Mr. Athukorale’s integrity, honesty and simplicity was demonstrated in everything he did. He always worked for the greater good of the school. He wanted his students not only to reach national level but aim and achieve international levels. In order to give the best, he head hunted many a best teacher of the subject to Nalanda.

Mr. Athukorale always considered that it was the school’s responsibility to bring out the best in students. He encouraged freedom of expression among staff and students, promoted free thinking.

Mr. Athukorale had been a father, teacher and a friend to any student who sought his advice. Students who got caught for wrong doings were not punished initially but were severely warned and advised not to involve in such acts again. He always believed in giving students a second chance to correct themselves. He pushed students to achieve their full potential. During his time of service. Nalanda reached its peak in Academic performances, by improving the average number of students passing G.C.E (O/L) and (A/L) examinations, also producing the Island’s best students in science streams in certain years.

During his period, Nalanda reached the top in most of the sports and in, cricket, being the foremost and Nalanda had been consistently feeding players to the National team and the Sri Lanka schools cricket team. Hockey is another sport that continuously won championships at Inter school national level competitions. Athletics, too reached the top level with some record-breaking performances. Cadeting prospered and Senior Cadets won the coveted ‘Herman Loos’ Cup awarded to the best cadet platoon among the schools in the country twice. This trophy was won by Nalanda after 39 years. The Junior Cadets brought the “De Zoysa’ Challenge Trophy awarded to the Island’s best Junior Cadet Platoon after 12 years. Football too was another sport that reached top level.

Coinciding with the Golden Jubilee of Nalanda, the young past students of the school with the support, guidance and initiative, of the Principal Sugunadasa Athukorale formed the Nalanda Junior Old Boys Association (NJOBA) on the 7th of January 1975. The foresight the Principal had in supporting this initiative is evidenced today that this Association during its 47 years of journey has become one of the largest and wealthiest OBAs in the country.

Immediately after its formation, it began to support school in many ways. The very idea of forming this association was to get the young past students linked to the school at a very young age.

Mr. Athukorale had innovative approaches to solve problems and always encouraged creativity in students. It was always felt that he could see things 10 years ahead. His projects were futuristic. He saw the potential of Nalanda, to impart knowledge by giving a quality education to a higher number of students. He planned a rigorous programme of infrastructure development for Nalanda.

Mr. Athukorale should be credited for Nalanda’s rich infrastructure. A new three-storied Laboratory Building which has a Shrine Room an Auditorium and a Library was constructed during his era in 1979. He saw the need for a Theatre Hall to facilitate the development of performing skills and aesthetics of budding Nalandian artistes. A state-of-the-art Theatre Hall was constructed and it was named the ‘Malalasekera Hall ‘in honour of Nalanda’s First Principal Dr. Gunapala Malalasekera (1925-1927). These are some of the infrastructure projects this dynamic Principal added to the College.

His loyalty to Nalanda was unwavering till his death. Even after retirement he became a regular visitor to Nalanda and was available for any advice to many of us, past students. He was an honourable person with good human qualities. He spent a considerable time and effort to develop Nalanda. Very often he was seen after school hours watching sports practices at a corner of the College grounds under the shade of a tree. His life style was a very simple one. While he had his Volkswagen Beetle parked at school, he used to take the bus plying in route number 166 to go to the Education Department office at Green Path Colombo 2. He was spending public money very cautiously.

Mr. Athukorale preferred to be among his staff members and students. This was amply demonstrated at the first ever ‘Guru Upahara’ -Teacher felicitation ceremony organised by the Junior OBA in 1997, he enjoyed the company of his former lieutenants throughout the day and congratulated the Junior OBA for introducing such an event to the events calendar. I consulted him on many occasions for advice at the time I was heading Junior OBA. After his retirement, he participated in every event at Nalanda.

To coincide with the 100th birth Anniversary of this great Principal, Nalanda Junior Old Boys Association is organising the inaugural ‘Sugunadasa Athukorale Memorial Speech’ via zoom, which will be delivered by a prominent Old Nalandian during the month of November. This will be followed by a donation to the school. This programme will be added to the calendar of events of the Junior OBA. The Junior OBA is ever grateful to their founder patron Mr. Sugunadasa Athukorala. The name of Mr. Sugunadasa Athukorale will be written in gold in the history of Nalanda as one of the most far sighted Principals Nalanda ever had.