The parliamentary watchdog committee on public enterprises-COPE has called for an explanation as regards unauthorised expenditure on ‘Yowunpura’ in 2018 and 2019.

A recent COPE investigation has revealed huge losses and a bid to suppress the government auditing process.

According to COPE, the yahapalana government had spent Rs. 80,560,914 over the estimated cost of Rs. 350 mn. The then President Maithripala Sirisena and Preme Minister Ranil Wickremesinghe attended the 2018 event; the President skipped the event the following year.

The then minister Sagala Ratnayaka played a key role in organising the UNP’s flagship project ‘Yowunpura’ to attract the youth. COPE probe has revealed that public funds had been spent, sans proper procedures

The COPE also observed that Rs. 1,932,500 had been spent on 1,773 T-shirts for the distribution among youth after the conclusion of the ‘yowunpura,’ meet in 2016. The parliamentary watchdog committee pointed out that public funds had been spent without approval of a Technical Evaluation Committee (TEC). 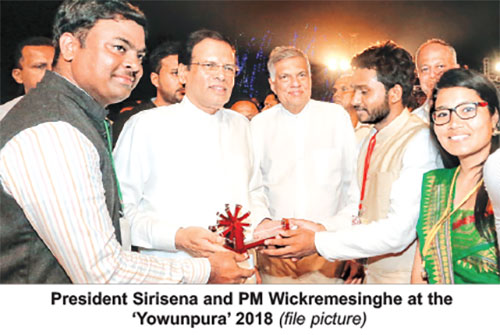 It was also revealed at this Committee meeting that according to the report of the Survey Board, 268,000 leaflets had been discarded whereas the total cost of printing in 2017 was Rs. 1,822,400.

Although Sri Lanka Youth Services Pvt. Ltd. was established in 1981 with over 98% shareholding in the National Youth Services Council, it was disclosed at the Committee meeting that the joint financial had never been prepared.

Instructions pertaining to the non-disclosure of matters related to the National Youth Services Council and the Sri Lanka Youth Services Pvt. Ltd to outside parties by way of an Internal Circular issued by the Chairman of those institutions Dhammith Wickremesinghe to the Heads of Divisions on 08th October 2021 was also revealed at the COPE Committee. The Committee pointed out that it hindered the work of the National Audit Office and the Ministry of Youth & Sports.

The Secretary to the Ministry of Youth & Sports and the Chairman of the National Youth Services Council and the Sri Lanka Youth Services Pvt. Ltd. should co-operate or face the consequences, Prof. Hearth said. Their failure to do so would be a serious impediment to the government, Prof. Herath told the COPE meeting last Tuesday (16)

The COPE Chairman also instructed the Secretary to the Ministry of Youth & Sports, Anuradha Wijekoon, to take immediate action against officials who were found to be negligent and misbehaving.

The Chairman of the Committee Prof. Charitha Herath stated that there was a delay in the submission of the Annual Reports of the National Youth Services Council to Parliament and also questioned the non-submission of the Annual Reports of the Sri Lanka Youth Services Pvt. Ltd. since 2015. The Committee also directed the Ministry of Youth & Sports to submit all such reports to Parliament expeditiously.

Although it was decided to construct the Nilwala Youth Park in Matara by a Cabinet decision, COPE pointed out that no feasibility study had been carried out in that regard. The Ministry of Skills Development and Vocational Training paid Rs. 142,810,543 as compensation and interest to the relevant land owners and Rs. 7,657,349 as advisory fees to the National Youth Services Council as at 31st December 2014.