SLPP heavyweight says Govt. can do without them

Sri Lanka Podujana Peramuna (SLPP) heavyweight and Tourism Minister Prasanna Ranatunga has asked the Sri Lanka Freedom Party (SLFP) to leave the government as the SLPP could do without its support.

Addressing the media on Saturday (27), Minister Ranatunga asked former President and SLFP leader Maithripala Sirisena, MP, and members of his parliamentary group to quit the government. 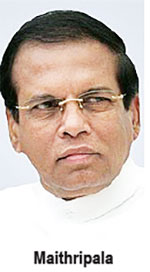 Minister Ranatunga recalled how he urged the electorate in the run-up to the last parliamentary election in August 2020 not to vote for anyone connected with Maithripala Sirisena.

The SLPP Gampaha District leader emphasized that the SLFP contested the last general election on the SLPP ticket. Of the 14 lawmakers in Parliament, 13, including one on the National List (Dr. Suren Raghavan) represent the SLPP. The remaining MP entered Parliament from Jaffna on the SLFP ticket.

Responding to a media query, Minister Ranatunga pointed out that a 2/3 was not required to sustain the government though there were instances the ruling party couldn’t do without such a majority such as introduction of a constitutional amendment.

Minister Ranatunga urged the SLFP to stop making pronouncements pertaining to the government’s position in Parliament. The Minister said that anyone could leave the government.

Last week, Minister Ranatunga called for legal action against MP Sirisena on the basis of the recommendations made by the Presidential Commission of Inquiry (PCoI) into the 2019 Easter Sunday carnage. Minister Ranatunga declared that even if all those causing issues quit, the government could go ahead.

Political sources said that the relationship between the SLPP and the SLFP has further deteriorated against the backdrop of the latter throwing its weight behind a high profile campaign launched by a dissident group within the government against the Treasury entering into a controversial agreement with New Fortress Energy. The SLFP and several other smaller groups including the National Freedom Front (NFF) with six lawmakers in the current Parliament have pledged to oppose the US energy deal whatever the consequences. The rebel group consists of over 25 MPs.

Meanwhile, the crisis within the ruling parliamentary group was mentioned as one of the major issues undermining the incumbent government at a workshop conducted for Media Secretaries of ministers and State Ministers conducted at Sri Lanka Foundation on Saturday (27).

The meeting was told how continuing internal strife within the government parliamentary group as well as constituents weakened the administration. Media Secretaries questioned the failure on the part of the government at least to brief them properly of contentious matters as various groups pulled in different directions.

Political sources pointed out that the Chief Government Whip Dinesh Gunawardena last week assured Parliament that there was absolutely no issue between the government and the SLPP. The MEP leader made the declaration in the wake of heavy exchanges between the SLFP and Agriculture Minister Mahindananda Aluthgamage over the latter’s criticism of Maithripala Sirisena during the budget debate on presidential expenditure.