The memories David Miller (aka Killer Miller) smashing two successive sixes off Lahiru Kumara in Sharjah to derail Sri Lanka’s T-20 World Cup campaign are still fresh in memories of Sri Lankan cricket fans. There was indication yesterday that Kumara has learned little from the ordeal as he was entrusted by Kandy Warriors skipper Angelo Perera to bowl the last over of the Colombo Stars innings with 16 needed in the final over.

A single off the first ball brought Sekkuge Prasanna to the strike with five balls remaining and 15 runs required. Kumara had brought both the fine-leg and third man up and then sent down the wrong delivery; a bouncer. He did get the top edge but the extra pace saw the ball sailing over fine-leg making the equation nine off four deliveries.

Next delivery, Kumara went round the wicket and bowled on the slot but Prasanna hammered this over square leg to make it three runs required in three balls. This probably was not the length or the pace Kumara should have been bowling and he erred a third time and on this occasion, Prasanna smashed a straight six to snatch victory from the jaws of defeat with two balls to spare.

Prasanna was named Man of the Match for his stunning hitting. His 32 runs came off just six deliveries with five sixes.

Dinesh Chandimal had held the Colombo Stars innings together scoring 44 off 27 deliveries with four fours and a six. He emerged as the tournament’s highest run getter with 225 runs at an average of 56 and strike rate of 156.

With just one win in six games and just two points, Kandy Warriors are facing elimination from the competition.

Earlier, Dushmantha Chameera produced a superb spell to restrict Kandy Warriors for 146. Chameera claimed four for 35 runs, the best figures by a Sri Lankan quick in this LPL. He’s also now the joint-highest wicket taker in the competition with 11 scalps alongside Samit Patel and Maheesh Theekshana.

Kandy Warriors were on course for a big score having posted 82 for one at the half-way mark in ten overs. But then the Chameera spell turned the tide in Colombo Stars favour.

Kandy Warriors still had things under control having reduced Colombo Stars to 110 for five with two overs remaining. But then that stunning effort from Prasanna enabled them to snatch victory from the jaws of defeat. 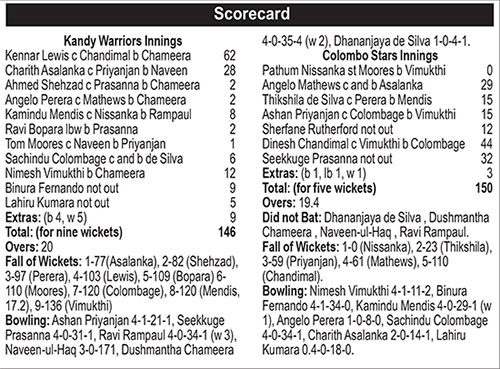