Tourism Minister Prasanna Ranatunga has said that the government is prepared to consider dissenting views expressed by various parties critical of the agreement on the Yugadanavi Power Plant situated at Kerawalapitiya.

The Gampaha District SLPP heavyweight said that the government would take, what he called, a comparatively good decision after examining concerns expressed as regards the agreement. 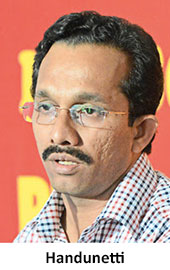 In addition to the JVP and the SJB, a section, within the SLPP parliamentary group, as well as Ven. Athureliye Rathana Thera of Ape Janabala Pakshaya have launched a high profile campaign against the energy deal. All of them have moved court against the agreement with an American company.

A nationalist civil society group, led by Dr. Gunadasa Amarasekera, too, has resorted to legal action.

Declaring the government’s readiness to reach a consensus with the dissident group, Minister Ranatunga said that the copies of the agreement had been made available to the leaders of the constituent parties of the government to facilitate a dialogue.

JVP leader Anura Kumara Dissanayake tabled the secret Yugadanavi agreement in Parliament on Dec 10. The government on Sept 17, 2021 finalised the agreement though in spite of repeated requests refrained from tabling it in Parliament.

Minister Ranatunga said that party leaders could express their views on the issue at hand. If the Yugadanavi deal could provide relief to the people, the government should go ahead with it, lawmaker Ranatunga said, underscoring the importance of the relevant ministries briefing the pubic of the advantages and disadvantages of the agreement.

Minister Ranatunga said that the continuing accidental explosions caused by domestic gas cylinders, too, was a major problem. Once the investigations into the incidents were brought to a successful conclusion, the Attorney General could initiate legal proceedings, the minister said.

The Minister alleged that the Opposition was trying to exploit current developments to its advantage.

Former JVP MP Sunil Handunetti yesterday (15) told The Island that consultations among political parties represented in the government parliamentary group as well as others in Parliament should have taken place ahead of the signing of the agreement.

Alleging that Yugadanavi deal was nothing but a clandestine operation, one-time Chairman of the Committee on Public Enterprises (COPE) Handunetti asked the rationale of the CEB Chairman M.C. Ferdinando signed as a witness in his other capacity as an Advisor to the Finance Ministry.

Pointing out that Ferdinando had declared at a media conference arranged by the Presidential Media Division (PMD) that the signing of the agreement was delayed as they awaited the Attorney General’s approval, Handunetti urged the government to explain the developments in the wake of cabinet granting approval to Treasury Secretary S.R. Attygalle to sign what was called a framework agreement on behalf of Sri Lanka.

The role of the AG as well as the Chief Government Valuer in the Yugadanavi project should be examined, the ex-MP said.

Handunetti said that the government had been in an indecent hurry to finalize the agreement. Referring to a Finance Ministry Cabinet Memorandum dated Sept.06, Handunetti said that the cabinet has authorized Attygalle on July 5, 2021 and the framework agreement signed on July 7, 2021. The share sales/ purchase agreement has been signed over a week after the relevant cabinet memorandum, the former lawmaker said, adding that the government swiftly and decisively moved this matter after the change at the Finance Ministry in July this year.

Responding to another query, Handunetti emphasized that until JVP leader Anura Kumara Dissanayake presented a certified copy of the agreement to the Parliament on Dec 10, the government made a desperate attempt to suppress it.

Before the signing of the Yugadanavi deal, the government brought M. C. Ferdinando as the Chairman of the CEB and engaged in a clandestine operation for over five months until the exposure of the deal. Handunetti said that the Yugadanavi deal was as bad as the treasury bond scams if not far worse as those responsible manipulated the whole political and administrative setup to achieve their sinister goal.

The former MP said that the SLPP couldn’t suppress the ugly truth by proroguing the Parliament. The Yugadanavi fiasco should be examined taking into consideration other major issues, including the decision to pay the Chinese USD 6.7 mn having rejected consignment of carbonic fertiliser and the import of liquid fertiliser from India under controversial circumstances.

The JVPer said that the government on its own had caused so much turmoil at a time the country was struggling to meet its financial obligations, both here and abroad.