Extremism is a virus. It spreads exponentially. In most societies extremism exists at the fringe but, often ignites the centre by appealing to commonly held shibboleths. Not infrequently, due to the indifference of liberals and moderates, public apathy, and both implicit and explicit political support when expedient, extremism drives the central narrative. The ugly reality is that the spread of extremist ideology is catalyzed by common cultural, religious and ethnic prejudices and other related fissures in multi-cultural and multi-ethnic societies. Extremism thrives in conditions of hatred, intolerance and suspicion. No society is free of these malignancies but in some societies they are more obvious and unapologetically expressed, at regular intervals. Often, extremism is conflated with religious doctrine, ethnic-tribal consciousness and related exclusivities, and then manipulated by unscrupulous politicians seeking power, mandates or an effective political lever. A superficial assessment of such incidents suggests that examples of extremism are more common in Asian and African countries than in other parts of the world.

The recent, gruesome public torture and murder of Sri Lankan Priyantha Diyawadana in Sialkot, Pakistan, was a tragic example of extremism, in a country in which the public narrative is often quite openly driven by extremist ideology. Apologists may posit that it is unfair to judge a nation by one tragic incident but that contention has to be viewed in perspective. The Pakistan Penal Code, the country’s main criminal code, penalizes blasphemy against any recognized religion, with penalties ranging from fines to the death sentence. However, there are no published statistics to indicate whether this law has been invoked in the case of alleged blasphemy against any creed, other than Islam. Whilst it is unclear whether any person found guilty of blasphemy has been judicially executed, between 1987 and 2017, over 75 people so accused are reported to have been murdered by vigilante squads. That apart, lawyers representing those accused of blasphemy and those speaking against the severity of the blasphemy laws have also been victimized. 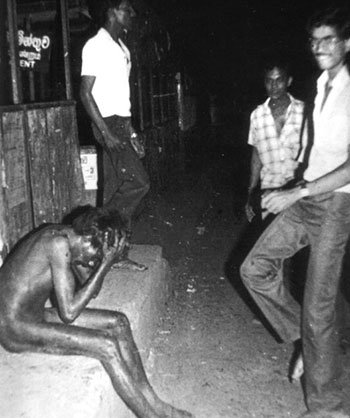 Two infamous examples of the above merit mention. In 2009 Aasia Bibi, a Christian low-caste woman in a small village in the Punjab, was attacked by fellow women of her village for drinking water at a village well, from a cup that did not belong to her; Aasia, a Christian had used an utensil reserved for Muslims. This act, which supposedly rendered the water ” Haram” ( forbidden) and the ensuing quarrel led to Ms Bibi being convicted of blasphemy and sentenced to death. After years of incarceration she was finally freed and permitted to emigrate to Canada, a rare happy ending in cases of the kind. However, two of her supporters, politician Shabaiz Bhatti and Governor of the Punjab, Salman Taseer were less fortunate, paying with their lives for their championship of Aasia’s cause, both being assassinated, the latter by a member of his own security.

In 2017 Mashal Khan, a 23 year old Muslim student of the Abdul Wali Khan University, was beaten and shot to death by his fellow students, for alleged blasphemy.

Pakistan- officially the “Islamic Republic of Pakistan”- is a country birthed in the illiberal concept of an insular Islamic state, in response to the demand of Islamic nationalists as articulated by the All India Muslim League led by Mohammed Ali Jinnah. What followed, in the partition of British India in 1947, was a chaotic population transfer between the land declared as Pakistan and the nascent State of Independent India, a process accompanied by about two million deaths resulting from religious differentiation- Hindu versus Muslim. Since its violent birth two motifs have defined the central narrative of Pakistan; the position of Islam as the religion of the State, overriding all other relevancies, and its paranoia of India. The result has been the regressive Islamization of the country’s political discourse, its laws, educational curricula and the conditioning of general societal attitudes; in totality an ideal nursery for radicalism and extremism.

Hussain Haqqani, former Pakistan ambassador to both USA and Sri Lanka, and scholar at Hudson Institute, Washington, has quite categorically declared that the Pakistan state has empowered and indulged extremists for years, perpetuating violence in the name of religion, instead of protecting its victims.

Pakistan Prime Minister, Imran Khan was quick to vehemently denounce the killing of Priyantha, conferring one of the country’s highest bravery awards on Malik Adnan, a work colleague of the victim who had tried to prevent the assault. Over 200 of the alleged attackers have been arrested. However, Khan’s Minister of Defence, Pervez Khattak, has trivialized the incident, suggesting that ” murders can happen when youngsters get emotional”, a “boys-will-be-boys” kind of equivalence, absolutely unforgivable under the circumstances. Khan’s government had also recently lifted the ban on the Tehreek-e- Labbaik Pakistan( TLP), the extremist organization linked to the outrage. Therein lies the ambivalence of the Pakistani State towards extremism; as defined by Haqqani, a clear case of running with the hare and hunting with the hounds, a stratagem both overtly and covertly emulated by every single regime in Pakistan since Ayub Khan.

The Sialkot tragedy comes with a message, that the dynamic of extremism unleashed by a small minority can engulf the majority in the flames that it ignites. Whilst we condemn Pervez Khattak for his attempt to justify the murder of Priyantha by Islamic extremists, let us not forget the observation- “the justifiable anger of the Sinhalese”- of J.R. Jayewardene, a former president of this country, rationalizing the destruction visited on the Tamil communities of this country in July 1983 by largely Sinhala-Buddhist mobs. Whilst we condemn the horrific manner of the killing of Priyantha in Sialkot, let us not forget the many innocent, helpless, living Tamils who were consigned to similar funeral pyres in Colombo and its suburbs in July 1983. They were not killed for blasphemy, or for any other real or imagined crime, but simply because they spoke a different tongue and worshipped different gods. Whilst justifiably condemning the dreadful murder of Priyantha by a group of Pakistani citizens, we Sri Lankans, as a nation, are in no position to occupy moral high ground.

In more recent times in Sri Lanka we have the real life scenarios of anti-Muslim violence, reportedly orchestrated by the ” Mahason Balakaya”, and the “Bodu Bala Sena”, the latter led by Galabodaatthe Gnanasara, Buddhist priest-cum-felon, recently appointed by president Gotabhaya Rajapakse as chairman of the “One Country, One Law” task force. The absurdity, the irrationality of that appointment defies logic, unless examined in the context of a devious mind in which logic is conditioned by the conviction of Sinhala-Buddhist hegemony. Viewed in that background, the appointment seems designed to provide an ecclesiastical counter to Cardinal Malcom Ranjith, who has been vociferous in his quest of closure for the Catholic dead of the Easter Sunday bombings.

Commencing with the attack on the “Fashion Bug” emporium in Nugegoda in February 2013, the destruction in Aluthgama in June 2014, and continuing with the violence of Gintota in November 2017, Ampara in February 2018 and Digana/Teldeniya in March 2018, we have a seen a series of well orchestrated assaults on Muslim people, establishments and property. In most of these events the active participation of Buddhist priests and the involvement of the above mentioned exclusivist organizations have been reported. In the aftermath of the Easter Sunday carnage of April 2019, there were similar attacks on Muslims and related establishments in several districts. In many of these incidents Buddhist priests, some named, others unidentified, are reported to have taken part. However, there has been no official investigation of such allegations. There is also the allegation that in all of the incidents described above, that the Police did not take timely action to prevent the escalation of the violence and the destruction.

What is evident is a scary similarity, between the lukewarm official response to the intermittent anti-Tamil pogroms , commencing in the aftermath of the enactment of the Sinhala Only Official Languages Act in 1956 and culminating with the atrocities of 1983, and the anti-Muslim actions of the last decade. Absence of a pro-active response by law enforcement in the face of racially motivated criminal violence implies complicity. When such violence is preceded by hate speech delivered by men in yellow robes, and justified by the same individuals after the events, there is no alternative to the presumption of extremism embedded in religion. When men in yellow robes are accorded a veneration not merited by their conduct, and when such individuals are seen as immune to the normal law of the land, what results is an unacceptable social, moral and legal disequilibrium.

In Pakistan and elsewhere, extremism driven by the distortion of the tenets of Islam will continue, despite both internal and international condemnation, as long as the law of the land permits religious dogma to override civil law, acceptance of diversity and tolerant interaction. It will continue as long as political leaders permit themselves to be dictated to by religious leaders or religious extremists. It will be no different in any other country in similar circumstances, whether the majority religion is Buddhism or Christianity or any other creed. That is what we in Sri Lanka need to guard against. Religion and politics makes for a toxic brew. Religion and government are two isolated propositions and cannot merge comfortably within governance.

The example of the influence of theocracy in governance as seen in Iran, and the power of fundamentalism demonstrated in Afghanistan, are convincing paradigms of the incompatibility of democratic principles, equality of sexes and tolerance of diversity within such regimes. In Sri Lanka, over the years, we have witnessed the many tragic consequences of the lack of tolerance between the majority ethno-religious group and the minorities. Despite assurances for reconciliation and consensus given by our leaders, both within the country and internationally, our minority communities continue to protest against marginalization. Whilst making allowances for the often unrealistic expectations of small minorities living alongside large majorities, it is still not an imagined grievance but a response to extremist and intolerant thinking. It is a great pity that the latter should be conflated with the Sinhala-Buddhist mindset but that is also the reality.

Radical, extremist thinking demands the invention of enemies to reinforce its radical mandate. In Sri Lanka, with the suppression of the Tamil-LTTE military threat, Muslims have been catapulted to that empty space. This writer has said it before and would say it again. Retaliation from Islamic extremists will be a war without boundaries and a war we will never win. Examples, worldwide, are too numerous to merit mention. The Easter Sunday carnage may have been the beginning of that unwinnable contest in Sri Lanka.