Thiruketheeswaram, one of the five “eswarams” mentioned above, is in the coastal village of Manthai in the Mannar District

History has shown that although the Portuguese destroyed tangible structures, they could not destroy the intangible faith of the ancient people and in this instance, the Hindu people of Sri Lanka 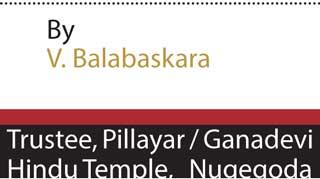 July 2022 is significant in the world Hindu diary of events, with the consecration ceremony at the world renowned Thiruketheeswaram temple!

Let us get to know some details about this temple.

In very ancient Sri Lanka, there were five temples built on all sides of the Island and dedicated to the Supreme Lord Shiva – who is also known as Eswaran. Hence the names of these five temples ended with the suffix – eswaram. They are: Nagul-eswaram in the North, Kon-eswaram in the East, Thiruketh-eswaram and Mun-eswaram in the West and Thond-eswaram in the South. They are all located in proximity to the coast, aimed at protecting our island nation from natural perils of the Indian Ocean.

Thiruketheeswaram, one of the five “eswarams” mentioned above, is in the coastal village of Manthai in the Mannar District. Classical era architectural influence suggests that the origin of the temple dates to pre-historical times. When Vijaya landed on Lanka’s shores, there was already the temple for Lord Shiva at Thiruketheeswaram. Himself a Hindu, and desirous of earning the goodwill and esteem of his subjects, he embarked on meritorious deeds, such as the erection and reconstruction of temples. The “YalpanaVaipavamalai” records “He (Vijaya Raja) was a staunch worshipper of Shiva and began his reign by dedicating his city to that God and building Shiva temples as a protection for the four quarters of his infant kingdom.” This was during an era of about 500 BCE.

The Nagas were in occupation of Lanka, along with the Yakkas, in the pre-Vijayan era. The great Nagas who lived in the Northern and Western coasts of the Island were Shiva Lingam (an abstract or an iconic representation of the Hindu god Shiva) worshippers, they had their own temples – Thiru-KethuIshwaram was incredibly famous. These kingdoms existed from an earlier period of the Ramayana.

In a very ancient time,Kethu, one of the serpent-headed Navagrahas (9 Planets) and Lord to three of the stars, is believed to have worshipped at this temple, from which the name “Thiru – keth – eeswaram” is derived. The temple has been referred to by South Indian Hindu (Saiva) sages in their devotional songs (stanzas) compiled in the 6th, 7th, and 12th centuries. The only other temple that is bestowed with such fame is Thirukoneswaram (in Trinco). They had not visited Sri Lanka but sang about these two temples, from the shores of South India.

The temple has also been mentioned in the great Epics of Ramayana and Mahabahrat. In the book titled “EpigraphiaZeylanica” it is stated that local folks from as far as Anuradhapura and Kataragama had paid homage to this temple in the olden days, and this stands grand testimony to religious pluralism in ancient Sri Lanka.

After many centuries of fame and veneration, this temple perished during the ominous invasion of our mother land by the Portuguese. Their religious exclusivism resulted in forced conversion, changing the demography of the population. Further, their iconoclasm resulted in the senseless and brutal destruction of this hallowed place of worship. They were hell bent on committing Hindu religious genocide. The area where this magnificent temple stood,was demolished, and flattened and shrubs and jungle enveloped the sacred area, for the ensuing four centuries. However, history has shown that although the Portuguese destroyed tangible structures, they could not destroy the intangible faith of the ancient people and in this instance, the Hindu people of Sri Lanka.

In the nineteenth century Arumganavalar, a Hindu divine stalwart from Jaffna, learned of this temple from historical archives and started to search for it in the original location. His divine efforts were richly rewarded when a Shiva lingam (A lingam sometimes referred to as Linga or Shiva Linga, is an abstract or an iconic representation of the Hindu god Shiva in Shaivism) carved out of solid rock from the Chola era was discovered. This Lingam can be seen in the temple to this day. The temple was slowly, rebuilt in stages. In this context it is appropriate to recall the inspiring words of India’s first President Dr. Rajendra Prasad after the Somnath Temple in Gujarat was rebuilt, where he said that “The power of reconstruction is always greater than the power of destruction!”

During the last quarter of the twentieth and the first decade of the twenty-first centuries, the temple suffered neglect because of the unfortunate civil unrest in Sri Lanka. However, over the past 7 years most of the temple has been rebuilt with the front Raja gopuram being refurbished. This was made possible due to the benevolence of the Indian Government and other philanthropists. The newly completed temple portrays magnificent Dravidian Architecture; a truly palatial abode for lord Shiva, who is father to Lord Ganesha (Gana Deviyo) and Lord Skanda (Kataragama Deviyo). It must be noted that Hindus worship the Supreme God, in different manifestations.

The holy water body associated with the temple is named as “Palavi” which is a natural tank in proximity to the temple. When approaching the temple, there is an imposing statute of Nandhi (Bull) from the Pallava era, facing the main entrance of the temple. Devotees enter the temple through the archway below the Raja gopuram. (Temple tower). There is also an imposing belfry to the right of the Raja gopuram, the tolls of which reverberate melodiously in the ears of devotees.

Inside the temple, there is a long rectangle hall with scores of pillars, exquisitely carved out of solid rock stone, which extends up to the main sanctum. The temple consists idols of both manifestations of lord Shiva – where a Shiva lingam carved out of solid stone and brought from Kashi (Varanasi) in India, is found in the main sanctum and the cosmic dance portrayed by the Nataraja Statute (Lord Shiva performing the cosmic dance of creation, protection, destruction, annihilation and bestower of blessings), made from an alloy of five previous metals is found in another sanctum. In addition, the temple also consists of other Deities that are worshipped in a conventional Hindu temple.

There is a courtyard around the above-mentioned rectangle hall, with smaller sanctums around the outer perimeter, all of which face the courtyard. When walking around the courtyard, the many pillars on the side provide resemblance of the ancient, holy,and historic Rameshwaram Temple in Dhanush Kodi, Rameshwaram in South India, which is also dedicated to lord Shiva. At the rear-end of the courtyard, directly behind the main sanctum, the colossal Shiva lingam of the Chola era can be found, which was deliberately buried by the atrocities committed by the Portuguese and unearthed during the nineteenth century. On Maha Shivarathri day, (the holy night dedicated to Lord Shiva), devotees have the rare privilege of bathing this Lingam, using sacred water from the Palavi temple tank.

Six (6) daily poojas are conducted in the temple. In addition, there is a colorful 10 – day annual festival,where the statute of lord Shiva is paraded in five different chariots. The Maha Shivarathri festival is another spectacular sight with hundreds of thousands of devotees flooding the place from all parts of Sri Lanka. It is of great significance for Sri Lanka that this celebrated temple will be fully functional from this week, bringing much needed blessings to our dear motherland.

Note: I would recommend any interested reader to read the book titled “Thiruketheeswaram – One of the Pancha (5)Iswarams of Ancient Sri Lanka” written by Mr Sanmugam Arumugam (1905 – 2000), ISBN: 9798695669268. It is a treasure trove about the detailed history and divine wonders of this holy shrine.