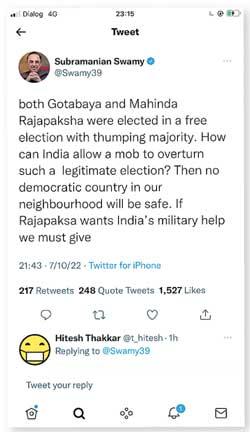 Dr. Swamy who is well versed in Sri Lankan politics and a close friend of the Rajapaksa family, asked in a Twitter message how India could allow a mob to overturn a legitimate election.

“Both Gotabaya and Mahinda Rajapaksa were elected in a free election with a thumping majority. How can India allow a mob to overturn such a  legitimate election? Then no democratic country in our neighbourhood will be safe. If Rajapaksa wants India’s military help, we must give,” he tweeted.

He who is known to be well versed with matters relating to Sri Lanka among others on Wednesday weighed in on the political and civic crisis in the neighbouring that has arisen from the Economic turmoil, urging the Indian Government to send the Indian Army to restore ‘Constitutional sanity’. Discussing how the upheaval in the island nation could spill over, or possibly rear its ugly head like in the case of the LTTE, Dr Swamy asserted that India ‘cannot allow another Libya in its neighbourhood’.